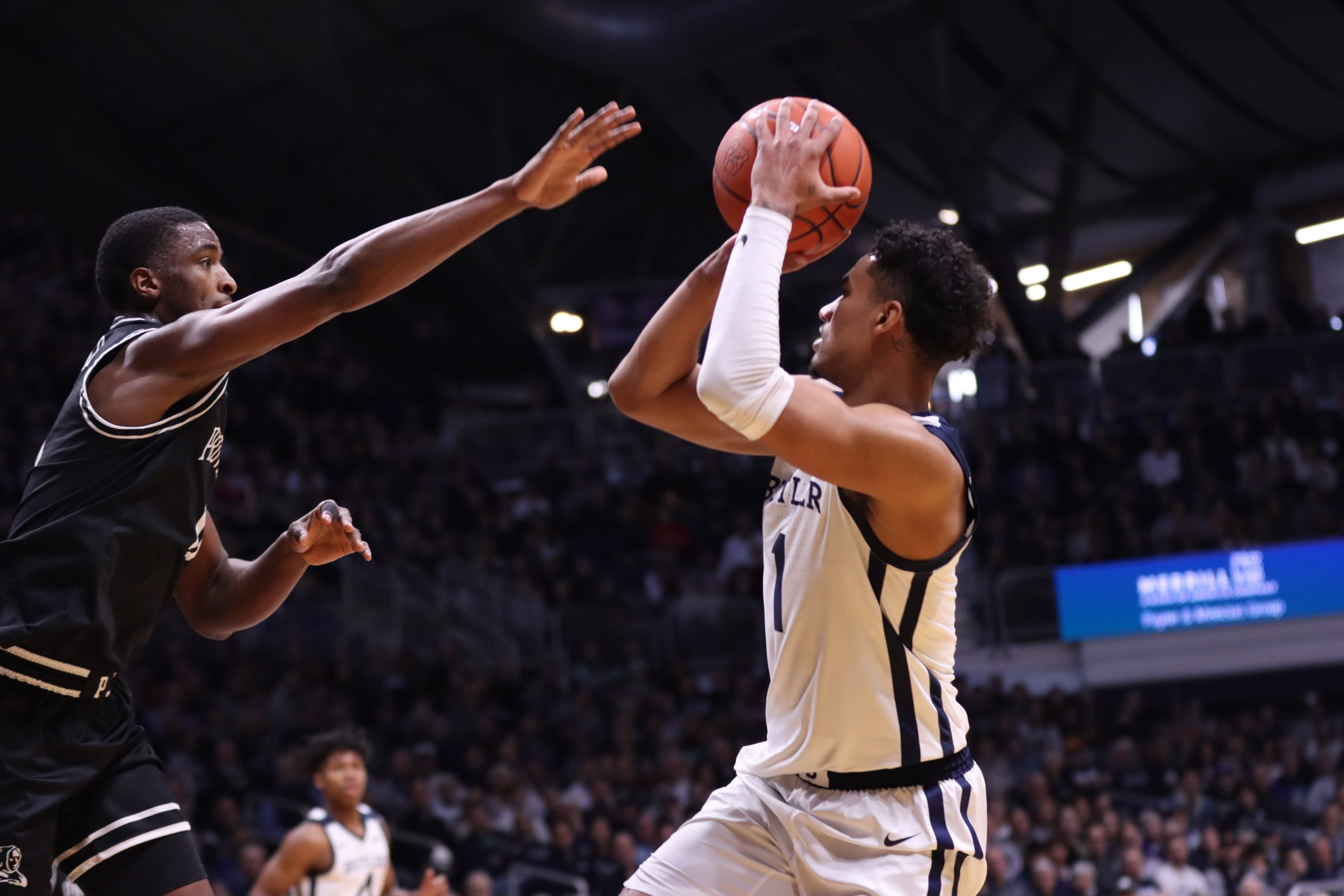 Jordan Tucker takes a shot against Providence on Feb. 1. Tucker finished with 12 points and 8 rebounds. Photo by Xan Korman.

On a day in which the two Big East teams in the AP top 10 both lost at home, the Butler men’s basketball team failed to capitalize, falling 65-61 to Providence at Hinkle Fieldhouse on Feb. 1. The Bulldogs fell to 5-4 in conference play and 17-5 overall, and are now tied with the Friars for fifth in the conference standings.

Here’s a look at some of the key storylines, stats, notes and quotes from the loss:

Butler played good defense in the first half but struggled mightily offensively. The Bulldogs held the Friars to just 11-of-30 from the field, including 3-of-12 from beyond the arc, in the first 20 minutes. The problem is that they themselves shot just 29% from the field, knocking down a mere five field goals. That’s the fewest of any half for Butler this season, below the previous worst mark of eight in the second halves against Southern and St. John’s. Butler also committed 10 turnovers in the first half. That mark is especially bad considering the slow pace of the first 20 minutes.

The Bulldogs trailed by just six at halftime thanks largely to free throws. Butler shot 19 free throws in the first 20 minutes against Providence, the most of any first half this season. The team knocked down 14 of them. Without those points, the halftime deficit may have been insurmountable.

Butler picked up the pace offensively to start the second half, but it wasn’t enough. Four minutes into the second half, each team had converted four field goals. After scoring just two points in the first twenty minutes, Kamar Baldwin scored nine in the first 14 minutes of the second half to help the Bulldogs tie the game at 51 with 6:40 to play. But a 3-pointer from Maliek White with 5:14 remaining pushed the Friars’ lead to four, and Butler couldn’t close the gap again.

Perimeter shooting was the key factor in this game. This was Butler’s worst 3-point shooting game of the season, plain and simple. Jordan Tucker knocked down a triple just 1:30 into the game and Butler never connected from beyond the arc again. The Bulldogs finished 1-of-14  – 7% – on 3-point shots, which is by far their worst mark in a contest this season. The Friars were 6-of-20 on such shots.

The Friars snapped their three-game skid and an 11-game losing streak against top 25 opponents. Providence’s last win against a ranked opponent versus then-No. 3 Xavier in March 2018.

Aaron Thompson’s absence had an immense impact in multiple areas. The junior guard missed his third straight game due to a wrist injury, and when he’s sidelined, a ton is placed on Kamar Baldwin’s shoulders. Baldwin has gone on huge scoring runs to lead the Bulldogs to victories multiple times this season, but that’s much more difficult to do while also running the team’s offense and taking on higher-level defensive assignments. Providence was able to limit Baldwin to an inefficient 4-of-15 from the field and cut off Tucker and Sean McDermott on the perimeter. That pushed a lot of this game inside the paint, where Butler won by most measures, but not by a wide enough margin. The domino effect of Thompson’s absence was clear against the Friars.

Providence’s bench outscored Butler’s bench 27-1. Butler got just one point from reserves against Baylor, but every other game bench players have combined to tally at least 10 points.

What’s next: The Bulldogs will remain at home to host Villanova on Wednesday, Feb. 5. Despite 21 points from Baldwin, a season-low five Butler turnovers and Villanova shooting under 40% from the field, the Wildcats defeated the Bulldogs 76-61 on their home court back on Jan. 21. In that game, Butler sent Villanova to the free-throw line 23 times resulting in 21 points from the charity stripe. McDermott was also just 1-of-11 from the field including 0-of-7 from beyond the arc. The Wildcats, ranked ninth in the most recent AP Poll, are 7-2 in Big East play and 17-4 overall following 76-61 home loss to Creighton on Feb. 1.