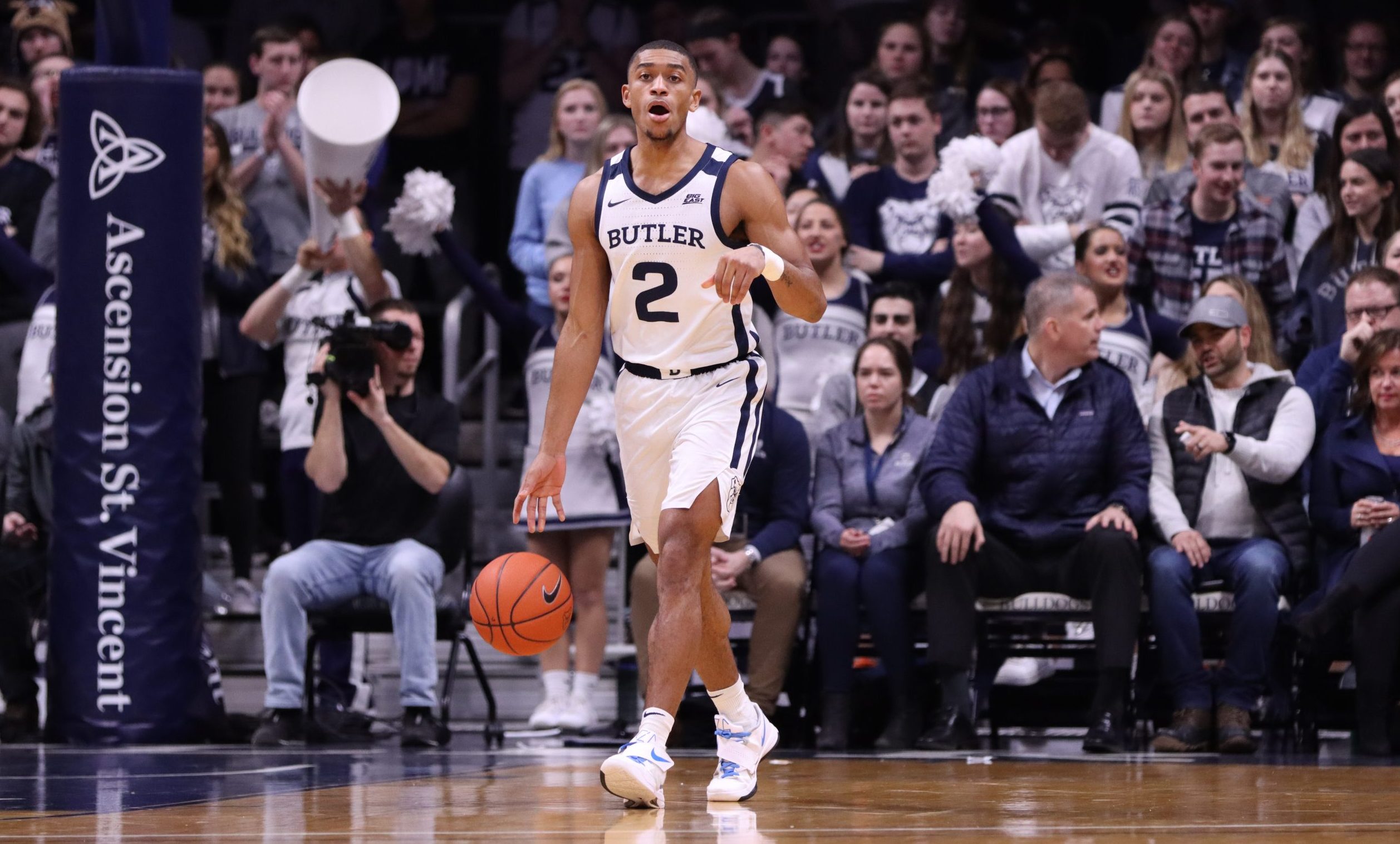 Aaron Thompson brings the ball down the court during Butler’s 79-76 win over Villanova on Feb. 5. It was Thompson’s first game back after missing three games due to a left wrist injury. Chandler Hart / Collegian file photo.

Heading into its game against Villanova on Feb. 5, the Butler men’s basketball team had lost four of its last six games. A few days later, the picture looks a little different. With Kamar Baldwin’s stepback three at the buzzer pushing the Bulldogs to a 79-76 win over the Wildcats, Butler has now won three of its last four contests and with a 6-4 Big East mark is part of a tie for third in the conference standings along with Creighton, Providence and the Bulldogs’ next opponent, Marquette.

Butler travels to Wisconsin to take on the Golden Eagles on Sunday, Feb. 9, in the second matchup in roughly two weeks between the two teams. On Jan. 24, playing without Aaron Thompson for the first time this season, Butler snapped a three-game skid with a wild 89-85 overtime win against Marquette. Baldwin scored 29 points after halftime and he along with Henry Baddley worked to limit Markus Howard, the nation’s leading scorer, to an inefficient 8-of-27 from the field.

Marquette, playing in its first game in over a week, will look to turn the tables on the Bulldogs on its home court on Sunday. Here’s everything you need to know as Butler looks to sweep the season series against the Golden Eagles:

After dropping three of its first four conference games, Marquette has won five of its last six and sits in a four-way tie in the conference standings with Butler, Creighton and Providence with a 6-4 Big East mark. The Golden Eagles are approaching lock status for the NCAA Tournament, but their two games since facing Butler haven’t exactly gone smoothly.

On Jan. 29, it took Marquette two overtime periods to defeat Xavier in Cincinnati. Markus Howard, the nation’s leading scorer, exited the game with roughly 12 minutes left in the second half due to a bloody nose, and the Golden Eagles scored just 22 points in the final 20 minutes of regulation. In the end, Marquette snuck by the Musketeers thanks in large part to 28 points from redshirt senior Sacar Anim.

In their most recent contest, a home matchup against DePaul – a team who’s currently just 1-9 in conference play – the Golden Eagles did not play well, as they were outscored by six in the first half, shot only 20% from beyond the arc, and only pulled out in front in the final few minutes. Howard played 40 minutes, scoring 31 points as Marquette pulled off a 76-72 win.

Marquette is a good team that’s been winning in recent weeks, but they clearly haven’t been firing on all cylinders all the time.

In the Jan. 24 matchup, Butler limited Markus Howard to 26 points, his second-lowest mark in conference play in a game where he played at least 30 minutes. Yet it still required a sensational performance from Baldwin for the Bulldogs to pick up a win on their home court.

A large part of that comes from Marquette’s secondary scorers. In addition to Howard’s 26 points, Sacar, the team’s second-leading scorer, tallied 22 points, while Brendan Bailey scored 14 and Koby McEwen contributed 13. It was just the second time in Big East play that four Golden Eagles reached double digits. The first was in a 20-point home win over Xavier.

Simply put, if four Marquette players reach double digits again, on their home court, and Markus Howard doesn’t have an incredibly bad game, Butler is probably going to lose. Working to limit Howard is certainly important, but the Bulldogs cannot get so caught up on him that they let the Golden Eagles’ other capable scorers get loose. In five of Marquette’s six conference victories, the Golden Eagles got either 20+ points from a player not named Howard or had multiple other players in double figures.

In this game against Marquette, though, Butler will have its best defender – and the facilitator of its offense – back on the court. Thompson will undoubtedly be tasked with defending Howard, which frees Baldwin up to focus defensively on some of those secondary scorers. Of course, on the offensive end, Thompson’s presence opens up a number of offensive options and will put more pressure on the Golden Eagles’ defense.

Marquette may have home court advantage this time around, but Butler will also have its most important player this time.

A victory over the Golden Eagles would be Butler’s first win against a projected NCAA Tournament team on the road this season. Last season, the Bulldogs won just two road games, against DePaul and Georgetown. It should go without saying, but a road win against a borderline top 25 team would be a huge resume boost for Butler.