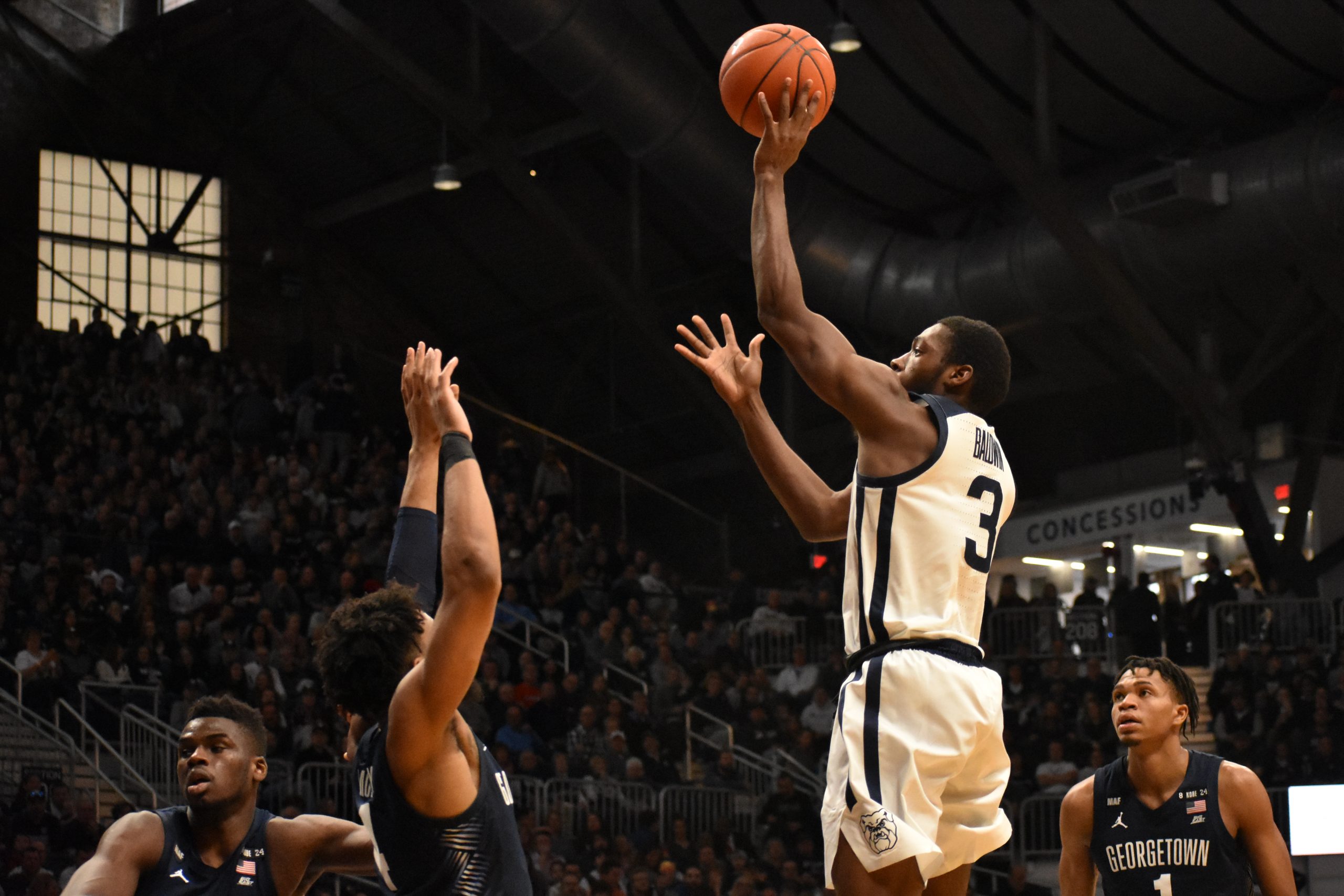 Kamar Baldwin takes a shot during Butler’s 73-66 loss to Georgetown on Feb. 15. Baldwin led the Bulldogs with 17 points in the game. Photo by Donald Crocker.

Butler and Georgetown squared off at Hinkle Fieldhouse on Feb. 15 each missing two pieces of their regular rotation. The game came down to which team adjusted better.

In the nation’s capital on Jan. 28, the Bulldogs adjusted well in the second half, overcoming an 11-point halftime deficit to defeat the Hoyas 69-64.

At Hinkle Fieldhouse, it was the Hoyas who made the better adjustment, while the Bulldogs struggled to adjust at all.

Behind four players in double figures, Georgetown took down Butler 73-66, dropping the Bulldogs to 7-6 in conference play and 19-7 overall.

Here’s a look at some of the key storylines, stats, notes and quotes from a highly disappointing loss:

The Hoyas’ victory was their fourth in a row at Hinkle Fieldhouse. While the two teams entered 7-7 against each other since Butler joined the Big East, the Hoyas are now 6-1 on the Bulldogs’ home court since then.

Thanks in large part to strong perimeter shooting, Georgetown got off to another strong start against the Bulldogs. In Washington D.C. on Jan. 28, the Hoyas knocked down just shy of half of their first half field goal attempts. At Hinkle, Georgetown shot 46% from the field in the first 20 minutes, including 5-of-8 from beyond the arc. Butler took 18 3-pointers in the first half – it’s most of any half this season – knocking down seven of them and trailing 32-31 at halftime.

Butler couldn’t slow the Hoyas’ offense in the second half. Georgetown was 14-of-24 – 58% – from the field in the final 20 minutes, while the Bulldogs shot just 41%. “We never adjusted,” Butler head coach LaVall Jordan said postgame. “You can say it all you want, you have to do it and execute. We’ve got to have a better plan.”

Three Butler players finished in double figures, but without Aaron Thompson and Derrik Smits, the team needed more from other pieces. Thompson didn’t play against the Hoyas due to concussion symptoms while Smits is dealing with a knee injury. Kamar Baldwin scored a team-high 17 points, while Jordan Tucker tallied 16 and Sean McDermott contributed 12. The three combined for 45 points, but shot an inefficient 39% from the field in doing so. Behind them, no Butler player scored more than eight points. Additionally, no Bulldogs’ player other than Baldwin or McDermott scored more than four points in the final 20 minutes.

Despite missing their two leading scorers, Georgetown had four players finish in double figures. Mac McClung and Omer Yurtseven both average over 16 points per game, and neither took the floor at Hinkle on Saturday due to injuries. In their absence, four players each averaging under 10 points per game combined to 61 points. Senior guard Terrell Allen tied his career-high with 22 points, while Jahvon Blair scored 16 points and two other Hoyas’ scored 12 and 11 points.

Perimeter shooting was a major factor in this game. Georgetown took 15 3-pointers and knocked down 10 of them for their best percentage in a game this season. Butler took more than double that number – 32 – and knocked down one fewer – 9. The difference in 3-point shooting between Butler and Georgetown – nearly 40 percentage points – is the greatest of any game the Bulldogs have played this season. Both teams had plenty of open looks in this game. The Hoyas, who entered the day 147th in the nation in 3-point field goal percentage – 0.339 – practically couldn’t miss from deep.

LaVall Jordan said that the Hoyas controlled the game from the outset. “They were more prepared … they were more focused,” Jordan said. “That’s on us as coaches. And they played harder. … The toughest team set the rules from the start.”

There were no significant injury updates for the Bulldogs. LaVall Jordan said that Thompson and Smits are continuing to be evaluated on a day-to-day basis. Jordan also said that Bryce Golden, who exited near the end of the game after taking a shot to the head, was not exhibiting concussion symptoms and was available to come back into the game in the final minutes.

For the second time this season, the Bulldogs took on the Hoyas without Thompson. Georgetown head coach Patrick Ewing said that despite Thompson’s importance to this Butler team, they knew the Bulldogs still have plenty of weapons. “Definitely, they miss his floor leadership,” Ewing said. “But they still have all the guys who can step up. They beat us the last time without him and came pretty close today to beating us against without him. He’s an integral part of their team but they have a lot of great players on their team.”

After starting Big East play 3-0, Butler has dropped six of its last 10 games. Things don’t get any easier in the week ahead. The Bulldogs’ next two games are on the road against the 10th and 23rd ranked teams in the most recent AP poll, Seton Hall and Creighton. Butler will then return to Hinkle Fieldhouse for two games against the two teams currently at the bottom of the conference standings, DePaul and St. John’s.

Up next: Butler will begin the first of two straight road games with a Wednesday night matchup against Seton Hall on Feb. 19. The Pirates play at Providence the evening of Feb. 15 before returning home to host the Bulldogs. Seton Hall sits atop the Big East standings with a 10-2 conference record, along with an 18-6 overall mark. The team was ranked 10th in the most recent AP poll and is 15th both at KenPom and in the NET rankings. The Bulldogs fell to Seton Hall 78-70 at Hinkle Fieldhouse on Jan. 15 for their first Big East loss of the season. Myles Powell scored 29 points and three other Pirates scored in double figures. With Aaron Thompson out for most of the second half due to foul trouble, the Bulldogs lost their 10-point halftime lead and fell by eight.