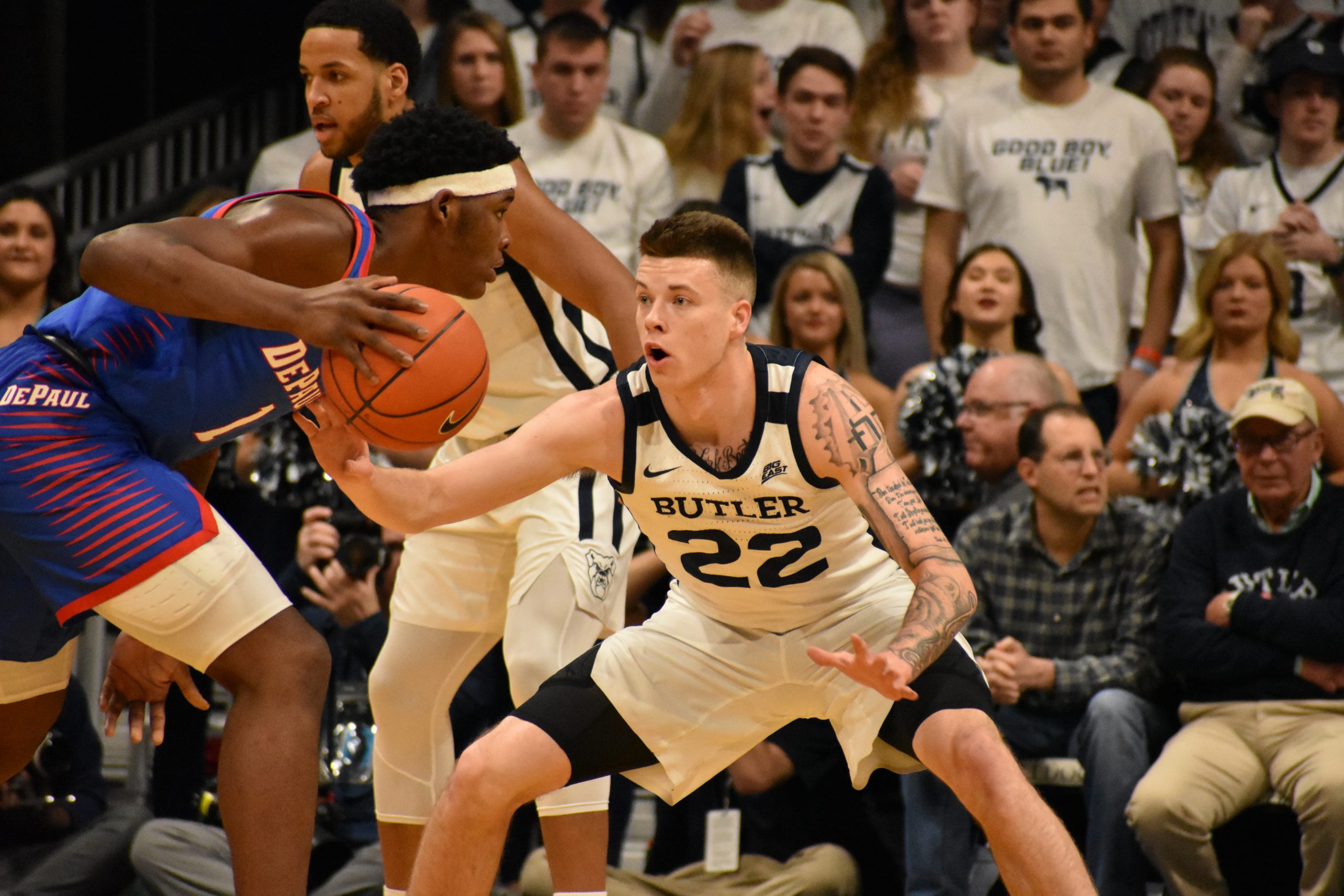 Sean McDermott defends the perimeter during Butler’s 60-42 win over DePaul on Feb. 29. McDermott scored 13 points in the contest, tied with Jordan Tucker for the team-high. Photo by Donald Crocker.

The Butler men’s basketball team ended a disappointing month of February on a positive note, defeating DePaul 60-42 at Hinkle Fieldhouse on Feb. 29 to halt a three-game skid. After falling below .500 in conference play for the first time this season, the Bulldogs are now 8-8 in Big East action, tied with Marquette for fifth in the conference standings.

Kamar Baldwin and Aaron Thompson both started and played regular minutes after exiting in Butler’s Feb. 23 loss to Creighton due to injury, while DePaul was without junior forward Paul Reed, who scored 23 points in the Blue Demons’ win over the Bulldogs in Chicago on Jan. 18.

Here’s a look at some of the key storylines, stats, notes and quotes from the Bulldogs’ 20th victory of the season:

Butler’s victory is its 12th against DePaul in the last 13 games between the two teams. The Bulldogs held an 11-game winning streak in the series prior to the Blue Demon’s 79-66 win in Chicago on Jan. 18.

The Bulldogs got off to a strong start but the offense slowed down the stretch in the first half. In Chicago on Jan. 18, the Bulldogs started 2-of-12 from the field and trailed 22-6 after the first six minutes. At Hinkle Fieldhouse, Butler took control in the opening minutes, going on a 13-0 run early and leading 16-4 through the first 7:30. But after starting 7-of-14 from the field, the Bulldogs were just 5-of-17 the rest of the half, and their lead was seven, 29-22, at halftime.

Butler clearly benefited from its time off. The Bulldogs had five days in between their last game, a 22-point loss at Creighton, and their matchup against the Blue Demons. With Butler’s injuries, that time off seemed especially useful, and neither Thompson nor Baldwin appeared limited in any way against DePaul. “I knew after being off for a week that they’d be extra antsy,” DePaul head coach Dave Leitao said postgame. “Our guys had some energy to them, especially early,” Butler head coach LaVall Jordan said.

Butler didn’t give up any ground in the final 20 minutes, and Jordan Tucker’s strong second half helped the Bulldogs up their lead. Butler shot 39% from the field in both the first and second halves, but the Bulldogs knocked down five 3-pointers in the final 20 minutes compared to the Blue Demons’ one. After being held scoreless in the first half, Jordan Tucker knocked down four of those threes on seven attempts in the second half, finishing with 13 points, tied with Sean McDermott for the game-high mark.

After allowing opponents to shoot nearly 50% from beyond the arc in their last six games, the Bulldogs held the Blue Demons to just 1-of-12 on 3-point shots. Coming into this game, Butler opponents were shooting better from deep – 47% – than from the field overall – 46% – in the month of February. And in the Bulldogs’ previous matchup with DePaul this season, the Blue Demons finished 10-of-17 on 3-point shots. “When they went smaller, it was a definite point of emphasis coming out of the locker room not to over help,” LaVall Jordan said. “I think our attention was there and our effort was there to contest shooters.”

Butler was able to force turnovers and capitalize on them. The Bulldogs kept the Blue Demons at a safe distance and expanded their lead in the second half partly because DePaul couldn’t go on any significant runs due to turnovers. DePaul coughed up the ball 17 times, including 10 times in the second half, and Butler turned those turnovers into 14 points.

DePaul’s 42 points are the fewest Butler has surrendered in Big East play this season. It’s also the third-lowest mark of any Butler opponent this season, topped only by Louisiana-Monroe’s 36 points and Southern’s 41 points against the Bulldogs this season.

No DePaul player reached double-digits, marking the first time this season a Butler opponent hasn’t had a single player score 10+ points against the Bulldogs. The Blue Demons’ leading scorer, junior guard Charlie Moore, was held to just eight points on 3-of-12 shooting from the field in this game. Much of the credit for that goes to Aaron Thompson, who defended Moore for most of the game.

What’s next: The Bulldogs will remain in Indianapolis to host St. John’s on Wednesday, March 4 in their regular season home finale. Butler defeated the Red Storm 60-58 at Carnesecca Arena on New Year’s Eve in one of its wildest games of the season. In that game, the Bulldogs went on a 23-2 run to end the first half, built up a 23-point lead, blew that lead in spectacular fashion and then went on a 7-0 run capped off by a Christian David three to start Big East play with a victory. The Red Storm, losers of six of their last seven games, sit near the bottom of the conference with a 3-12 Big East record.