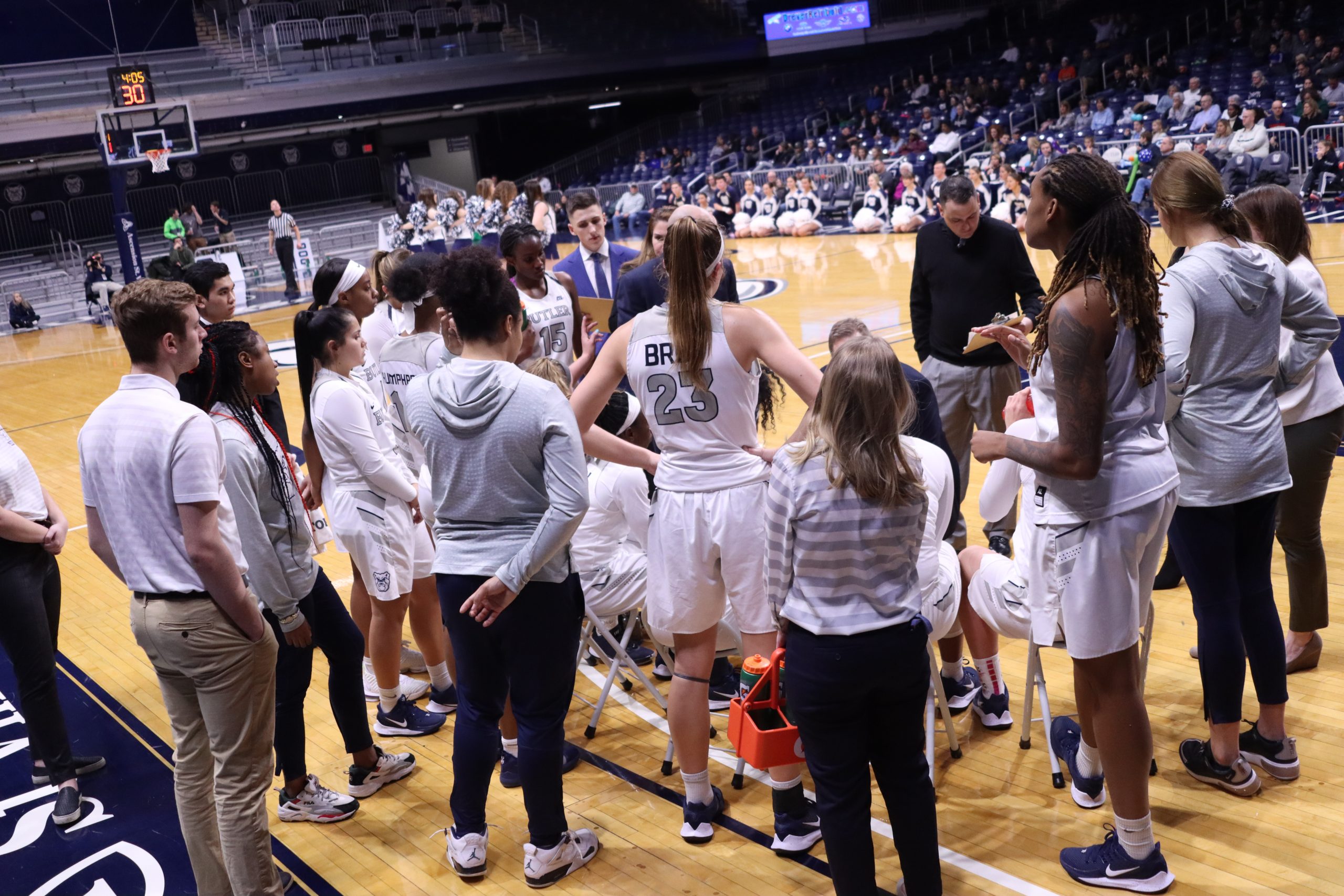 The Butler women’s basketball team huddles up against Xavier on Jan. 31. The Bulldogs defeated the Musketeers 63-61 in overtime. Photo by Xan Korman / Collegian file photo.

The men’s basketball team picked up a win and a loss this week.  On Jan. 28, the Bulldogs picked up a road win against Georgetown 69-64.  Butler started slow in the first half, trailing by as many as 14 points, but stormed back in the second.  The Bulldogs outscored the Hoyas by 16 in the second half. Senior forward Sean McDermott matched his career-high of seven three-pointers and scored 25 points in the win.

Then, on Feb. 1, Butler lost to Providence at home 65-61.  The Bulldogs struggled from long range all afternoon, hitting only one of the 14 3-pointers they attempted.  After this week’s results, Butler’s record sits at 17-5 and 5-4 in Big East play. Their next game will be at home on Feb. 5 against No. 8 Villanova.

In a wild game, the women’s basketball team defeated Xavier 63-61 in overtime on Jan. 31. Senior guard Kristen Spolyar led all scorers with 25 points, including the go-ahead basket with 23 seconds left.  She also added 11 rebounds. With the win, Butler swept the Musketeers for the season and improved their record to 15-6 — 7-3 in the Big East. Their next game will be on Feb. 7 against Georgetown at home.

The track and field teams had impressive performances against tough competition at the UW Invitational over the weekend.  On the women’s side, junior Emily Royston set a personal best time of 16:22:23 in the 5,000-meter, which was good enough for the third-best collegiate time and seventh-best overall time at the event.  Sophomores Margo Hornocker and Maddie McLain also set personal bests in the event.

The men were led by redshirt sophomore Barry Keane who set a new personal best in the 3,000-meter and finished 12th overall.  The next events for the Bulldogs will be on Feb. 7 and Feb. 8 at the Meyo Invitational.

The men’s tennis team went 1-1 in their road trip over the weekend.  First on Feb. 1, the Bulldogs lost at Cleveland State 4-3. After falling behind 2-0, Butler fought back to force a decisive No. 4 flight, where the Bulldogs came up just short.

Then, on Feb. 2, Butler defeated Youngstown State 4-3.  The Bulldogs fell behind again, but this time won the last four match-ups to secure the win.  The weekend’s results leave Butler’s record at 6-2. They begin a four-game home stand on Feb. 8 against Illinois State.

The women’s tennis team suffered three losses this week.  First, on Jan. 31, the Bulldogs lost to the University of Indianapolis 6-1.  Butler kept things close in doubles but struggled in singles play. Sophomore Sara Linn recorded the only win for the Bulldogs in singles.

Then, on Feb. 1, the Bulldogs fell again to Western Michigan.  After falling behind in doubles, the Bulldogs were swept in singles for the 7-0 defeat.