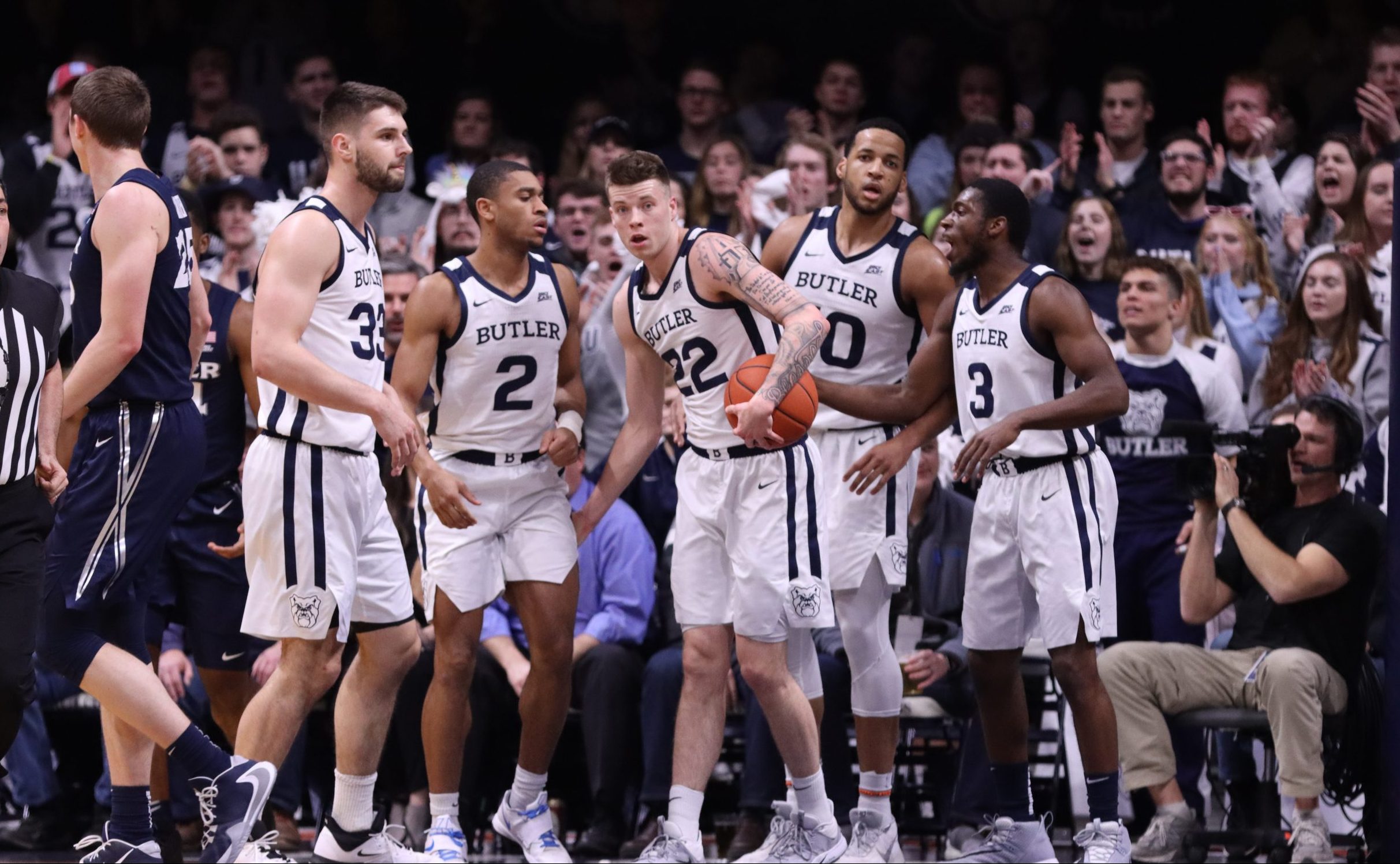 Butler huddles as a team during a game this season. The Bulldogs fell out of the AP Top 25 for the first time since late November. Chandler Hart / Collegian file photo.

Six weeks ago, the Butler men’s basketball team had started Big East play 3-0 for the first time ever, and, after building up one of the strongest nonconference resumes in the country, was ranked fifth in the nation in the Associated Press Top 25 and USA Today Coaches Poll. Now, after dropping three straight and eight of their last 12 contests, the Bulldogs find themselves looking in at the top 25 for the first time in nearly three months.

Injuries have undoubtedly played a sizable role in Butler’s slide, which includes a 2-5 February to date, but certainly not all of the team’s struggles can be chalked up to that.

The Bulldogs’ defense, one of the best in the country through the first few months of the season, has allowed Big East opponents to shoot 46% from the field and an even better 47% from beyond the arc in February. Taking care of the basketball and defending without fouling have been issues that have continued to pop up, and perhaps most importantly, this Butler team hasn’t been setting the tone early in games.

With three regular season games left on the schedule, let’s take a look back at the past week, the recent trends, where things stand now and what lies ahead in this week’s Butler basketball reset:

To be clear, Butler was not expected to win either of its games last week, as they both were against top 25 teams on the road. But a few rough losses in recent weeks – at home against Providence and Georgetown – put the team in a position where it needed a statement win to halt its recent slide. And while the Butler teams that showed up against Seton Hall and Creighton were very different, the end result was still the same.

The Bulldogs began the week with a matchup against the Pirates in New Jersey. Butler looked more like the team we’d seen earlier in the season, holding Seton Hall to 33% from the field in the first half and limiting Myles Powell, the nation’s leading scorer, to just 16 points on 15 shots. Bryce Golden finished just shy of his career high with 17 points, Sean McDermott shot 50% from the floor and Aaron Thompson scored 12 points, his most in Big East play.

Those were the positives. On the other side of things, the Bulldogs started the second half 0-of-7 from beyond the arc while the Pirates shot 57% from the field in the final 20 minutes. After three 3-pointers in a matter of 21 seconds from McDermott and Jordan Tucker, Sandro Mamukelashvili received a lob on an inbounds play and found the basket as time expired for a 74-72 Pirates’ victory.

At Creighton on Feb. 23, the Bulldogs were simply embarrassed by the Bluejays, one of the hottest teams in the country. Creighton led by 19 points at halftime, and midway through the second half the Bluejays had doubled-up the Bulldogs 70-35. Baldwin exited with an ankle injury near the end of the first half and didn’t return.

Without Baldwin, the Bulldogs’ offense looked completely lost. Until the final 1:30 of the game, no Butler player had converted more than two field goals in the second half. Creighton knocked down a season-high 15 3-pointers, and in the final minutes of the contest, Thompson exited after reinjuring his left wrist. Creighton won 81-59.

This week ended a 12-week stretch of AP Top 25 appearances for the Bulldogs, their longest since the 2016-17 campaign. Butler is now dangerously close to being in the bottom four teams in the Big East standings, which means a first round appearance in the conference tournament. Xavier, the team directly below the Bulldogs in the standings, hosts Butler on March 7 in Butler’s final regular season contest.

One interesting thing when examining the metrics for Butler: the team’s adjusted offensive efficiency rating at KenPom of 27th is just two spots lower than when the Bulldogs were fifth in the national polls on Jan. 13. But in that same span, the team’s defensive efficiency rating dropped 53 spots from 6th to 59th. Despite some significant offensive struggles at times, Butler has remained largely steady in those ratings. It’s the defensive side where the team has regressed substantially in the last six weeks.

Along with their steady decline in the polls and major metrics, the Bulldogs have also seen their stock fall regarding their placement in the NCAA Tournament. A projected one seed six weeks ago, Butler is now listed as a seven seed by ESPN’s Joe Lunardi, who has the Bulldogs matched up against 10 seed Indiana in the midwest region.

Backcourt injuries: As previously mentioned, Kamar Baldwin and Aaron Thompson, who form one of the better guard duos in the Big East, both exited against Creighton due to injury. After the game, Butler head coach LaVall Jordan said that Baldwin tweaked his ankle, which he had injured earlier this season. There was also no significant postgame update on Thompson, who missed three games in late January and early February with an injury to the same wrist and has had it taped up in games ever since.

It should go without saying that Baldwin and Thompson are crucially important to Butler’s success. The team has played without each of them at times this season, but never have both missed a game at the same time. The guard position is not one of great depth for the Bulldogs, who would be forced to turn to Henry Baddley and Khalif Battle for extended minutes if neither Baldwin or Thompson is able to take the floor in Butler’s next game.

Less than inspiring perimeter defense: Butler’s 3-point defense has simply been nothing short of horrible in the last few weeks. In the Bulldogs’ last six games, opponents are shooting 50% from beyond the arc. In the month of February, Butler opponents are shooting better from deep – 47% – than from the field overall – 46%.

The best such performances from Butler opponents came in the Bulldogs’ most recent games against Marquette, Georgetown and Creighton, who each knocked down double-digit threes. In Big East play, Butler’s been the worst team in the conference at defending the perimeter, with opponents making nearly 40% of their 3-point attempts. For the season, Butler’s 3-point field goal defensive rating is now outside the top 200 nationally.

Sean McDermott: No one had a particularly outstanding week for Butler, but McDermott was efficient from the field and contributed in multiple ways despite no massive offensive performances. Against Seton Hall, the redshirt senior took just eight shots, but converted four of them, including three of seven attempts from beyond the arc. Against Creighton, McDermott finished second on the team with 10 points on 3-of-8 shooting from the field. He also continued to bring a strong presence to the glass, tallying nine defensive rebounds between Butler’s two games last week.

Bryce Nze: The redshirt junior averaged 7.5 points and 8.5 rebounds in Butler’s two games last week, but still is trending down this week for one major reason: turnovers. When he has the ball in the post, Nze has made too many sloppy mistakes which have turned into turnovers, particularly in recent games. Nze committed four turnovers at Seton Hall followed by five at Creighton, and he leads the team in that category in four of its last six games. Nze also leads Butler in turnovers for the season and has six games this season with four or more turnovers.

The Bulldogs will have a good chunk of time to regroup with no midweek game this week. Butler returns to Hinkle Fieldhouse to host DePaul on Saturday, Feb. 29. The Blue Demons have lost seven of their last eight games but are coming off a 74-68 home win over Georgetown. DePaul takes on Xavier on the road on Feb. 25 before traveling to Indianapolis.

Butler fell to DePaul 79-66 in Chicago on Jan. 18 in one of the Blue Demons’ just two conference victories to date. The Bulldogs got off to a slow start offensively, sent DePaul to the charity stripe for 32 free throws, and turned the ball over 17 times in that game.

Looking past this week, the Bulldogs are well past the point of competing atop the Big East or securing a high-level seed in the NCAA Tournament. The three games remaining on Butler’s regular season schedule are all against teams outside the top 40 at KenPom, but this season has shown that the Bulldogs absolutely cannot take those games for granted. With a 7-8 conference record, Butler may very well need to win at least two of those games to avoid playing in the first round of the Big East Tournament.