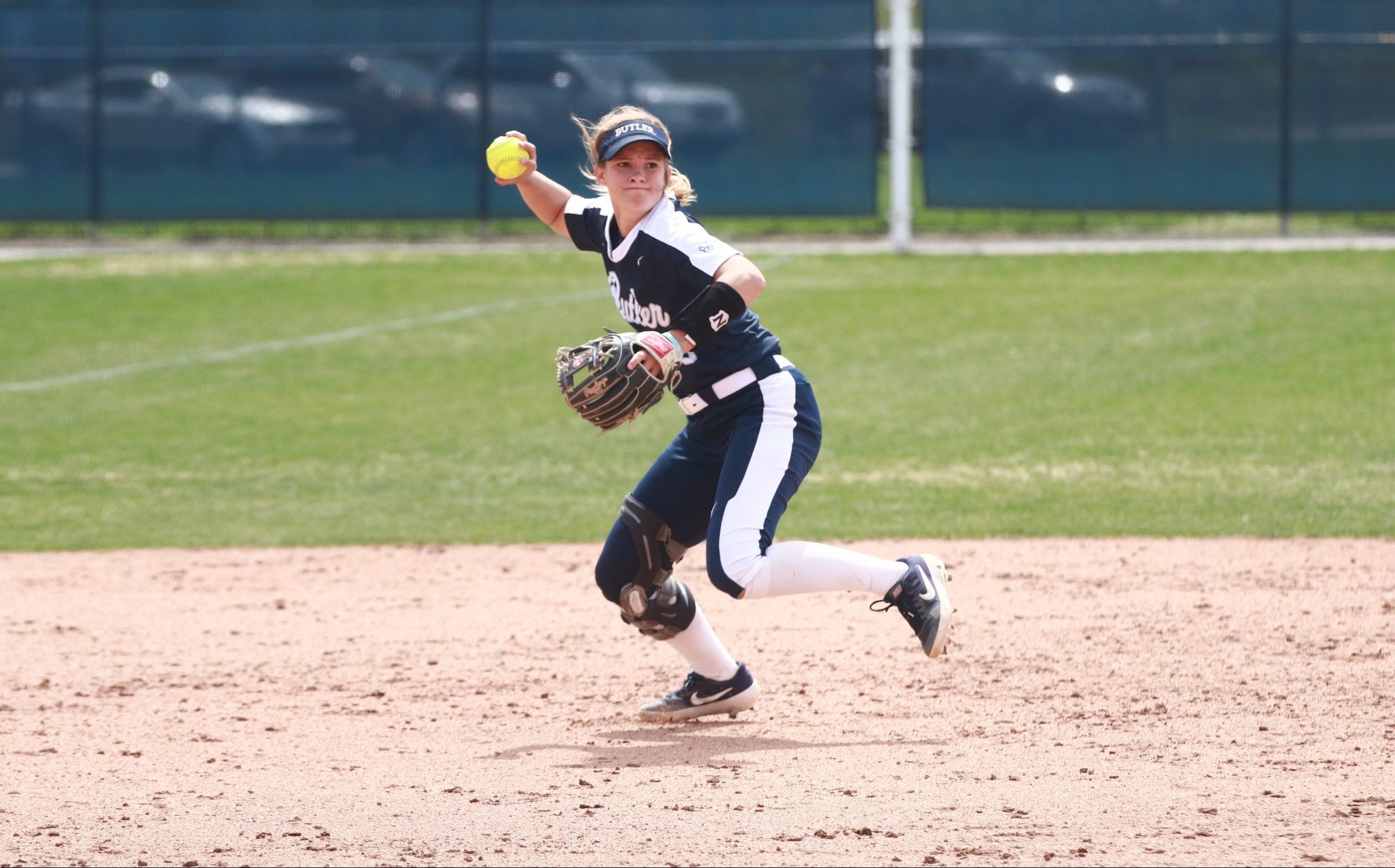 Butler shortstop Maddie Moore gets set to throw during a game last season. Moore and the Bulldogs are looking to improve upon last year’s 16-32 mark a year ago. Collegian file photo.

The Butler softball team kicks off its 2020 season on Feb. 7 at the Rambler Rumbler in Rosemont, Illinois. Here are five questions surrounding the program as it prepares for the 40th season of Butler softball.

1. How will Butler rebound from last year’s dismal season?

The 2019 season was the worst campaign for Butler since 2002. A year that was originally full of potential didn’t exactly pan out for the Bulldogs, who ended up finishing last in the Big East conference. Butler won just four Big East games en route to a 16-32 overall record after being picked fifth in the Big East Preseason Coaches Poll.

The Bulldogs have become accustomed to competing for Big East championships under head coach Scott Hall. But 2019 stings as the worst of his tenure with the Bulldogs in terms of wins.

Let’s not forget, we’re just four years removed from Butler’s run to a Big East Championship crown and an NCAA tournament bid in 2016. Last year’s seniors were the final Bulldogs from that 2016 squad to graduate.

We’ll see if the Bulldogs can recapture that magic in 2020.

Perhaps Butler’s most burning question heading into this season has to do with their production, or lack thereof, at the plate. Butler’s lack of run-support for its pitching staff was one of the key reasons the Bulldogs were only able to muster 16 wins a year ago.

Butler ranked in the bottom half of the Big East in every important offensive stat category in 2019. Their batting average of .252 was seventh among Big East teams and Butler scored just 158 runs in 48 games last season — the lowest mark of any team in the conference.

Some pieces are there for Butler. All-Big East selections Maddie Moore, who now has a full season of college softball under her belt after she tore her ACL during her freshman season, and Lauren Fey return this year. Last year Moore hit .441 in Big East play, while Fey hit .308 and compiled the second-most hits on the team in her rookie campaign.

Where Butler can turn after that for consistent offensive production remains to be seen. Karli Ricketts showed flashes of potential last season but was understandably inconsistent at the plate in her freshman campaign. Christina Candotti’s bat came alive in Big East play as she posted a .314 batting average and hit three of her four home runs against conference foes. Claire Gilliland was a solid option for Butler at the beginning of 2019, but was limited after the halfway point due to injuries.

3. How dominant will the top of their pitching staff be?

One of the few bright spots of the 2019 season was Butler’s talent at the top of their pitching staff. Sophomore Alyssa Graves and freshman Karli Ricketts made up one of the better 1-2 punches in the circle among teams in the Big East. That seems to be the outlook again heading into this season.

When Graves is at the top of her game she is no-doubt one of the best pitchers in the Big East conference. The southpaw led the Big East in strikeouts and posted a 3.12 earned run average in 143.2 innings last year. Graves churned out 15 quality starts – 5.0 innings pitched, fewer than 3 earned runs allowed – in her 26 starts in the circle in 2019.

Ricketts showed flashes of dominance en route to a 3.34 ERA in 109.0 innings last year. She allowed six earned runs and struck out 33 batters in her final three outings of 2019.

We saw a glimpse of what the duo was capable of when Graves and Ricketts took the circle against Big East-leading St. John’s in its last two games of 2019. The Red Storm came in with the top offense in the Big East and were limited to just one earned run and five hits in the two-game set. Graves and Ricketts combined for 23 strikeouts in the Sunday doubleheader.

Carrying that momentum over to 2020 will be key for the duo.

4. Where does the sophomore core go from here?

Butler brought in a huge signing class of nine players ahead of 2019 and several members saw significant action last season. Bri Avery, Fey and Ricketts were everyday players from that group.

Simply put, Butler needs this group to produce if a turnaround is in store.

Fey was Butler’s most consistent hitter last season — see question two — and one of the Bulldogs’ best in the field. She was the only everyday player for Butler with a batting average above .300 and a fielding percentage above .960.

Ricketts’ two-way capabilities made her key at times last year. She was tied for second on the team in RBI and hit three home runs to go with her strong appearances in the circle.

Avery is a solid contact hitter and was in the leadoff spot during fall ball. Prior to last season, Hall praised her speed and compared her to former Bulldog Jenna Foreman. Avery started 11 games and hit .385 in Big East conference play last year.

Can this trio retain their freshman selves and avoid a “sophomore slump?” How the Bulldogs’ sophomore core performs could be key in 2020.

5. Will any new faces emerge?

A 16-win season is sure to result in some changes in the Bulldogs lineup and Butler may turn to some new faces to fill those voids this season.

Hall raved about the power from a few players in the program’s freshman class this year. Given Butler’s offensive struggles last season it’s not out of the question that a member of the freshman class works their way into the lineup solely based on their offensive production this year.

Catcher Lexi Bowdish is sure to get a run in the Bulldogs’ lineup this year given that the roster only lists two players with catching capabilities. Mack Griman, a two-way player, could be another freshman to watch after she was a staple in the lineup during fall ball.

The Bulldogs outfield depth is relatively unproven after the loss of Foreman to graduation. So, how will the outfield look in 2020 and who will slide into that everyday slot?