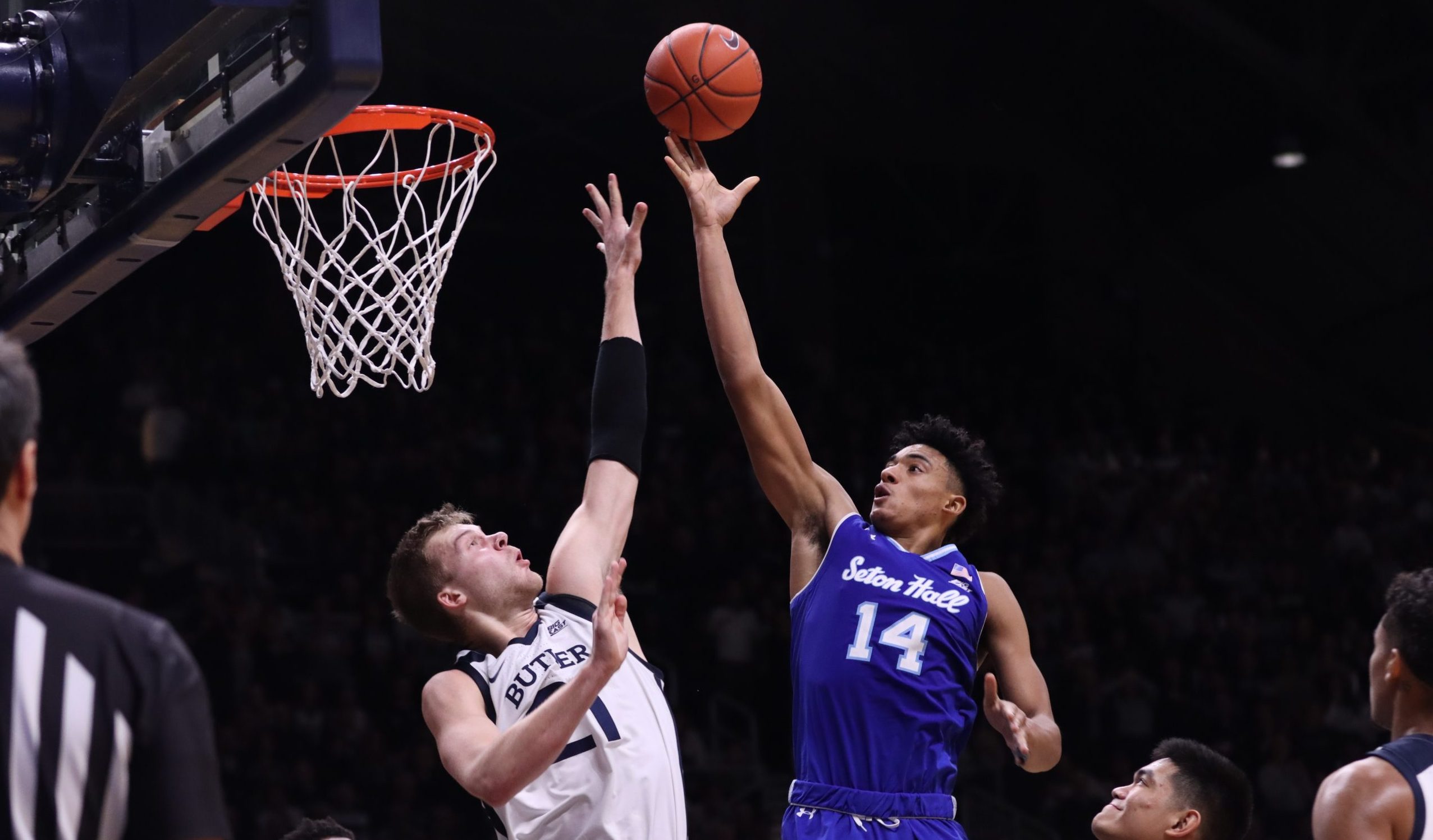 Seton Hall’s Jared Rhoden takes a shot with Derrik Smits defending him in Butler’s 78-70 loss to the Pirates on Jan. 15. Rhoden was one of four Seton Hall players to finish in double figures against the Bulldogs. Photo by Xan Korman.

After leading by double-digits at halftime, the fifth-ranked Butler men’s basketball team was outscored by 18 in the final 20 minutes and fell to No. 18 Seton Hall 78-70 on Jan. 15 for the Bulldogs’ second loss of the season. The Pirates, now 5-0 in the Big East, are now the only team that remains undefeated in conference play.

Here’s a look at some of the key news, stats, notes and quotes from the Bulldogs’ first Big East loss:

Seton Hall’s victory snapped Butler’s six-game winning streak, which included three straight victories to begin Big East play. At 15-2, this is still the Bulldogs’ best start to a season since 2012-13, when the Bulldogs advanced to the second round of the NCAA Tournament before falling to Marquette. This is the program’s seventh 15-2 start to a season this century.

Myles Powell’s 29 points were the most a player has scored against the Bulldogs this season. Powell, the Big East’s second-leading scorer, tallied 10 points in the first half and added 19 points in the final 20 minutes. While 29 points is higher than his average of roughly 22, this was well within his normal range, and the Bulldogs did hold the senior guard to a somewhat inefficient 9-of-23 from the field. While holding Powell to closer to 20 points would obviously have been better, his performance was not the reason Butler lost.

Behind Powell, three other Pirates scored in double figures. Romaro Gill, Jared Rhoden and Quincy McKnight combined for 41 points on nearly 60% from the field. Teams have beaten Seton Hall despite big performances from Myles Powell. But if you’re not going to limit him much, you need to keep the Pirates’ secondary options in check, and Butler was unable to do that.

After leading by 10 at halftime, Butler couldn’t keep up with the Pirates in the second half. The Bulldogs outshot Seton Hall from the field 56% to 38% in the first half, thanks in large part to efficient shooting from Jordan Tucker – 4-of-5 from the field – and Kamar Baldwin – 3-of-5. In the second half, Baldwin scored 10 points, but no other Butler player had more than six. “The biggest thing is we took away McDermott and Tucker,” Seton Hall head coach Kevin Willard said after the game. “We made it hard for them to get open shots.” McDermott was 2-of-7 from the field in the second half while Tucker was 0-of-2.

Aaron Thompson played just three minutes in the second half due to foul trouble, and his presence was missed on both ends of the court. Without Thompson on the court, Butler’s offense sputtered at times, and defensively his presence was certainly missed as well. In the final 20 minutes, the Pirates scored 48 points, the most Butler has given up to an opponent in a half this season. “I really think Thompson’s the guy that makes them go,” Willard said postgame. “If you don’t neutralize Aaron Thompson he’s going to get you, because he’s also a high-level defender.”

Butler head coach LaVall Jordan said the Pirates did a good job making defensive adjustments in the second half. “A couple of them, we just got denied and didn’t do a great job cutting to get open,” he said. “They went to some zone and changed to man in the middle of possessions. And it kind of puts you where you’re not as assertive as you should be. I thought we got in a better flow a little bit later but we didn’t necessarily start the half very well.”

Not to be buried in the loss, Tucker did have another impressive game. The junior forward, coming off a season-high 17 points at Providence, finished with 14 points and a career-high 10 rebounds. It marked the seventh game this season Tucker has come off the bench to score in double-digits.

Seton Hall’s 78 points are the most Butler has given up in a game this season. The previous record mark was 67 points surrendered to Stanford on Nov. 26. It’s just the fifth time in 17 games a Butler opponent has scored 60+ points. Entering play Jan. 15, Butler’s mark of just 54.4 points given up to opponents per game was the fourth-best in the nation.

Up next: Butler will have a quick turnaround from this game, traveling to Chicago to take on DePaul on Saturday, Jan. 18. Just over two weeks ago, the Blue Demons were receiving votes in the AP Top 25 after finishing nonconference play 12-1. Since then, the team has gone 0-4 in conference play and remains the only Big East team without a conference victory. DePaul came close in its most recent game, taking No. 14 Villanova to overtime on the road before falling by four points. Going into play on Jan. 15, the Blue Demons were 65th at KenPom and 64th in the NET rankings. Butler has won 11 straight games against DePaul.