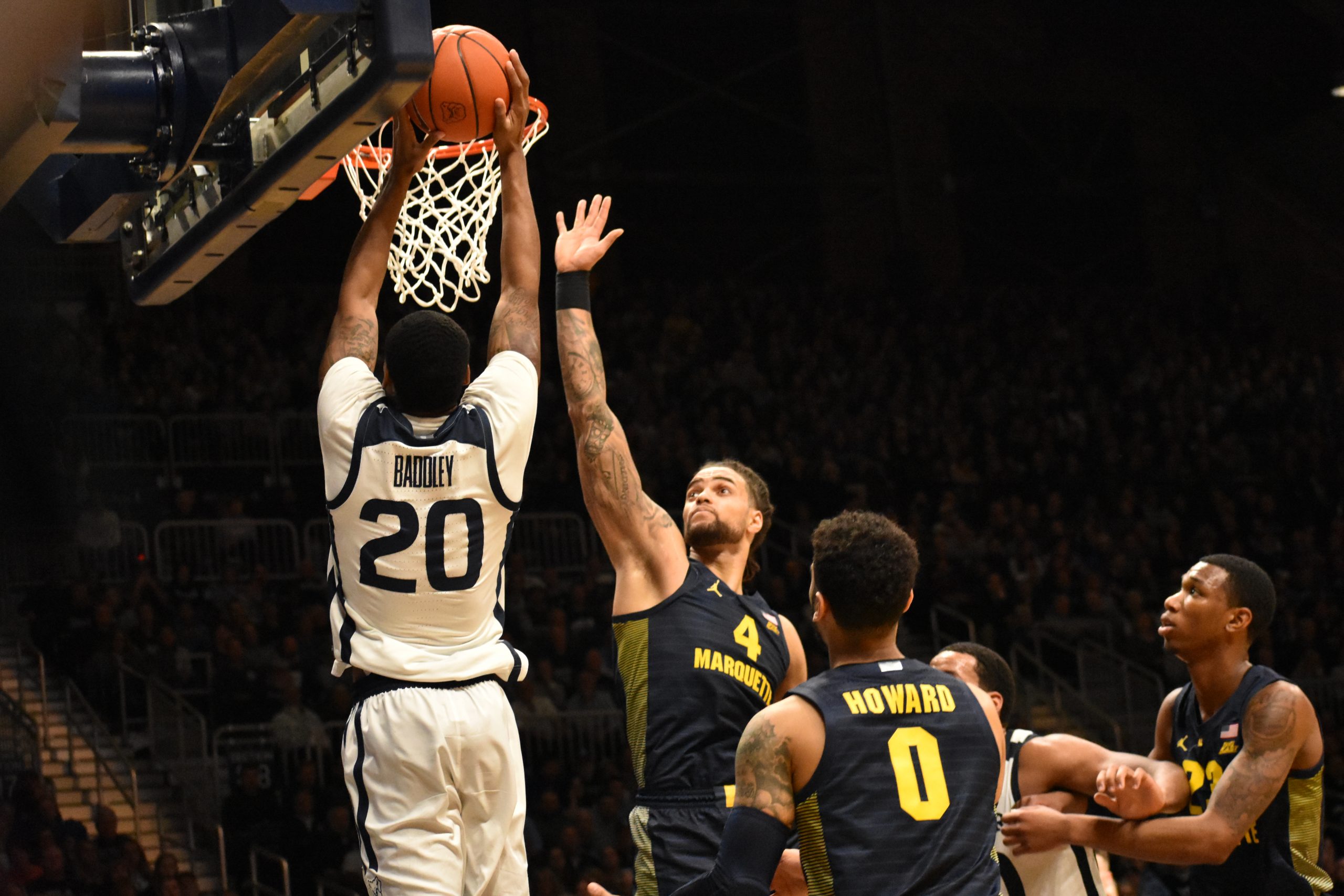 Henry Baddley dunks the ball during Butler’s 89-85 overtime victory against Marquette on Jan. 24. Baddley finished with a season-high 10 points in the game, good for third on the team. Photo by Donald Crocker.

Despite being without two fixtures in its regular rotation for the first time in months due to injuries, the Butler men’s basketball team defeated the Marquette Golden Eagles 89-85 in overtime at Hinkle Fieldhouse on Jan. 24 to avoid a fourth-straight loss.

Kamar Baldwin took his late-game heroics to another level and, despite plenty of tense moments and officiating frustrations, the Bulldogs picked up a victory which could prove to be yet another turning point in the team’s season. Butler is now 4-3 in Big East play and 16-4 overall.

Here’s a look at some of the key storylines, stats, notes and quotes from a much-needed win:

Kamar Baldwin’s performance down the stretch was nothing short of stunning. At halftime, the senior guard had just two points on 1-of-5 shooting from the field. In the second half, Baldwin did what he’s done before, putting the team on his back offensively. But this time it was on another level. Baldwin scored 15 of the team’s 21 points in the final 10 minutes of regulation. And he didn’t stop in overtime, scoring 10 of the team’s 18 points in that five-minute period. In all, Baldwin scored 23 of the Bulldogs’ 33 points in the final 11:23 of this game. He finished with 31 points, tying the season-best mark he scored at Ole Miss.

With Aaron Thompson and Christian David sidelined, Henry Baddley stepped up in a big way. The senior guard/forward, who was averaging just 9.2 minutes and 1.8 points per game this season, was pressed into increased duty following the news that Thompson, the facilitator of the team’s offense and one of the best defensive guards in the country, would be out for the game due to a wrist injury. And with David out for the season due to an ACL tear, the Bulldogs’ depth would be tested. Baddley answered the call, helping to limit the nation’s leading scorer, Markus Howard, to an inefficient 8-of-27 from the floor. Baddley scored a season-high 10 points on 4-of-5 from the field as well.

Marquette head coach Steve Wojciechowski had high praise for the Bulldogs, particularly Baldwin. “They made incredible winning plays,” he said postgame. “They have a really connected group and a great, great player in Kamar Baldwin, who at the end of the game we didn’t have answers for.”

Baddley and Baldwin did a very impressive job of limiting Markus Howard. After scoring 18 points in the first half, the senior scored just eight in the second 20 minutes and didn’t have a single point in overtime. Performing a role that typically would have been designated to Thompson, Baldwin and Baddley keep Howard from getting too many open looks. Howard, who was averaging nearly 32 points per game in Big East play, finished with 26 points, his second-lowest output in eight conference contests.

Butler head coach LaVall Jordan said thought Baldwin’s defensive efforts were particularly crucial. “I thought [Baldwin’s] defense was as big as anything,” he said. “Howard’s got 18 at halftime, and Henry and Kamar shouldered the bulk of the load together, one at a time. … I thought the defensive effort was great.”

Butler’s victory is its sixth in the team’s last eight games against Marquette. The Golden Eagles won both of the matchups between the two teams a season ago, but prior to that the Bulldogs had won five straight in the series. Butler now leads the all-time series 23-19.

The Bulldogs have tied their win total from a season ago. The Bulldogs won 16 of their 33 games last season. They’ve reached the same number of victories in just 20 games this season.

Butler won this game despite giving up a season-worst 16 3-pointers to the Golden Eagles. There were multiple times down the stretch, both in the second half and in overtime, where it looked like the Bulldogs had put the game out of reach and then Marquette knocked down a few triples. The Golden Eagles entered as a top 10 team nationally in 3-point percentage. The Bulldogs entered as a top 20 team nationally in defending the 3-point shot. In the end, Marquette knocked down more threes than the Bulldogs gave up in any game last decade.

There was no substantial update on Aaron Thompson’s status. As mentioned, the junior sustained a left wrist injury at Villanova on Jan. 21, and was ruled out against Marquette because of it. Postgame, Jordan said Thompson remains day-to-day. “We’ll just monitor and evaluate it every day,” he said.

What’s next: After just one game back at home, the Bulldogs will hit the road again, traveling to the nation’s capital to take on Georgetown on Jan. 28. The Hoyas are 12-8 on the season and 2-5 in conference play, near the bottom of the league. Georgetown, 52nd at KenPom and 55th in the NET rankings, has split the season series with Butler each of the last three years, though the Bulldogs have won their last three games on the Hoyas’ home court.