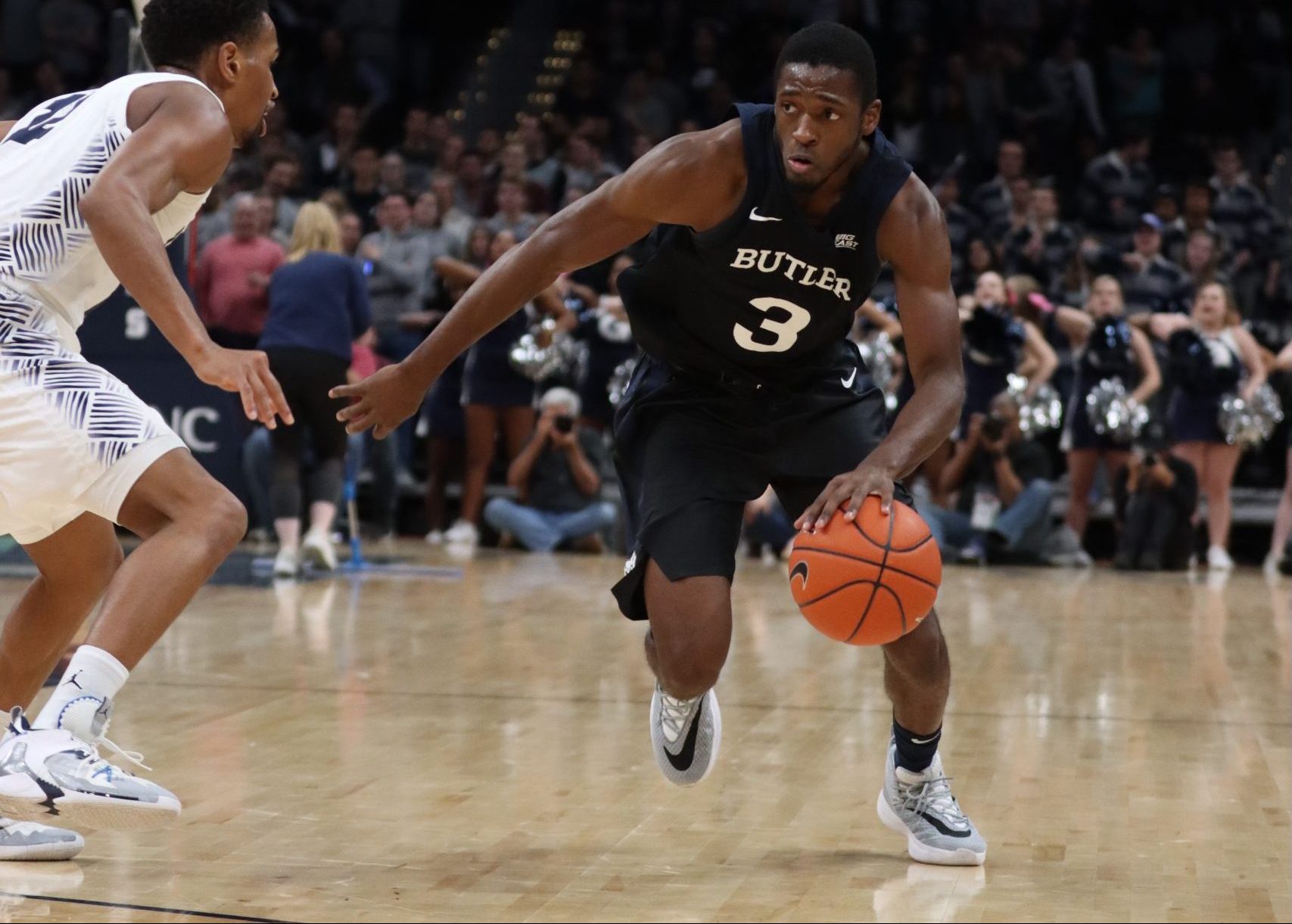 Kamar Baldwin drives toward the basket during Butler’s 69-64 win over Georgetown on Jan. 29. Baldwin scored 13 points in the game. Photo by Xan Korman.

Playing without Aaron Thompson for the second straight game, the Butler men’s basketball team overcame an 11-point halftime deficit to defeat Georgetown 69-64 on Jan. 28. Following three consecutive losses, the Bulldogs have now won back-to-back games and sit at 5-3 in conference play, good for a tie for third in the standings, and 17-4 overall.

Here’s a look at some of the key storylines, stats and notes from the victory:

The Bulldogs’ victory is their fifth straight against the Hoyas in the nation’s capital. Butler has won every road contest against Georgetown since Jan. 2015. The Hoyas, meanwhile, have won three straight at Hinkle Fieldhouse.

This game was truly a tale of two halves. The Hoyas outscored the Bulldogs 43-32 in the first 20 minutes, knocking down just shy of half of their field goal attempts. Butler came out strong at the beginning of the second half, going on an 18-3 run out of the break to take the lead. There were a number of factors in that drastic momentum shift…

After turning the ball over 12 times in the first half, the Bulldogs took much better care of the basketball in the final 20 minutes. Turnovers have been a problem for Butler at different points during conference play, particularly in the team’s three-game skid. In the first half against Georgetown, the Hoyas turned the Bulldogs’ 12 turnovers – most of the live-ball variety – into 17 points. In the second half, Butler cut down on the sloppy mistakes, coughing up the ball just three times.

Butler sent Georgetown to the charity stripe for 14 free throws in the first half, but cut down on the fouls down the stretch. Like turnovers, fouls were a significant problem for the Bulldogs during their recent losing streak. Seton Hall, DePaul and Villanova took 25, 32, and 23 free throws, respectively, during their recent games against the Bulldogs – those are the three highest marks the Bulldogs have given up all year. Against the Hoyas, five Bulldogs had tallied two fouls at halftime, and the team had committed 12 overall. Georgetown took 14 free throws in the first 20 minutes, converting 13 of them. In the second half, Butler committed just six fouls and the Hoyas tallied just four free throws.

Sean McDermott’s shooting slump appears to be over. After shooting nearly 50% from beyond the arc in nonconference play, the redshirt senior struggled some in the Bulldogs’ first handful of conference contests. Prior to Butler’s game against Marquette, McDermott was shooting just 25% from deep in Big East play. Against the Golden Eagles, McDermott scored 16 points on 5-of-8 from the field. Against Georgetown, McDermott single-handedly kept Butler remotely close in the first half, scoring 11 points on 4-of-5 shooting, including 3-of-4 from deep. He tacked on another 14 points in the second half to finish with a game-high 25 points on 9-of-12 from the field. It’s his highest scoring output since 26 points in the Bulldogs’ season opener against IUPUI.

After another rough first half, Kamar Baldwin got things going offensively. After scoring just two points in the first half against Marquette, the senior went off to add 29 in the second half and overtime in a wild victory. While he didn’t flip the switch quite so dramatically against Georgetown, Baldwin did contribute 12 points in the second half after scoring just one – on a free throw – in the first half. Baldwin has now scored in double figures in each of Butler’s eight conference games.

Butler has surpassed its win total from last season in 12 fewer games. The Bulldogs won 16 of their 33 games last season. Their 17th win of this campaign came in their 21st game.

What’s next: The Bulldogs will return to Hinkle Fieldhouse to host the Providence Friars on Saturday, Feb. 1. Butler picked up its first win at the Dunkin’ Donuts Center since March 2015 on Jan. 10 with a 22-point victory over the Friars. Since that game, Providence has gone 1-3, dropping its last three contests. The Friars are now 4-4 in conference action and 11-10 overall.