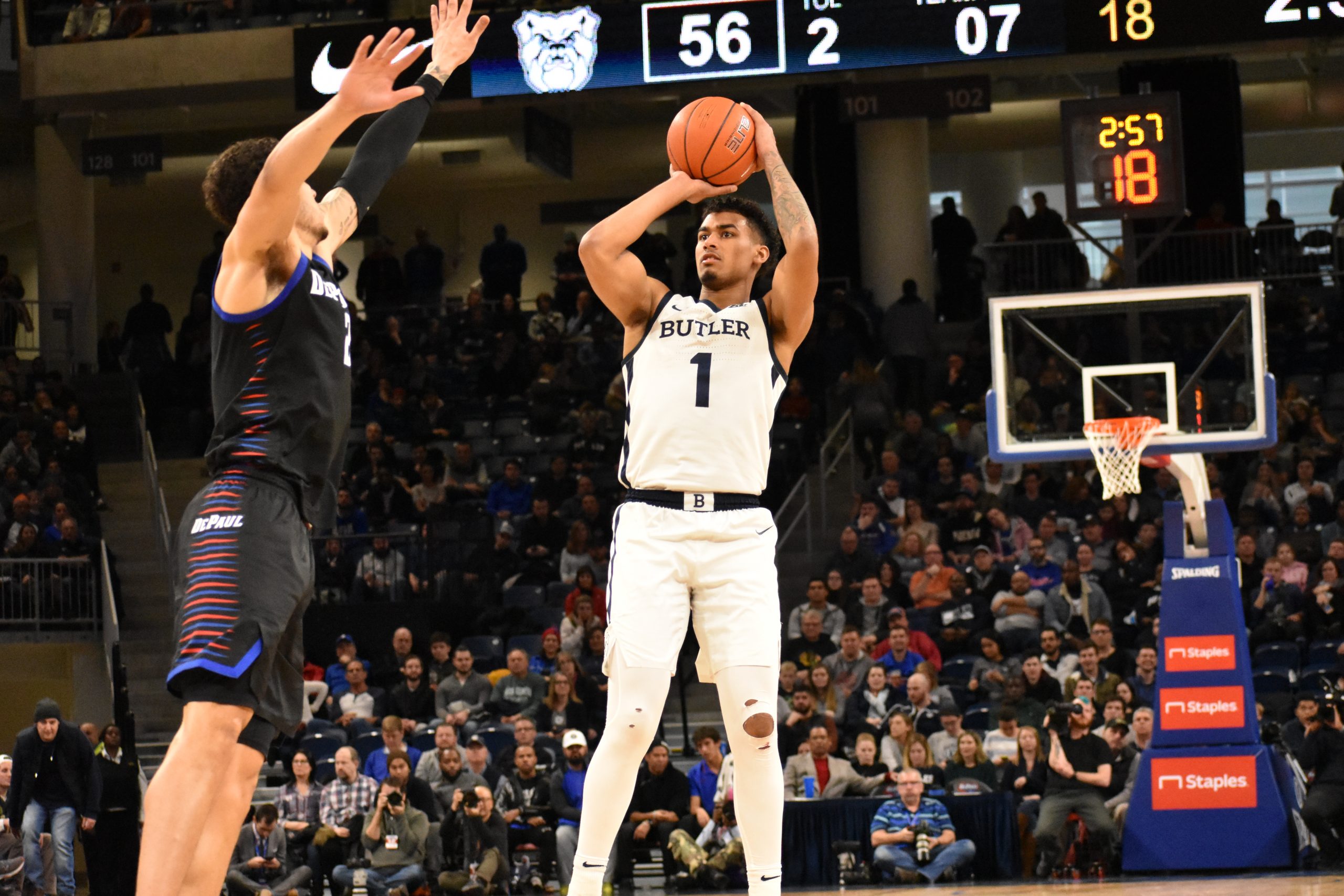 Jordan Tucker takes a shot against DePaul on Jan. 18. Tucker had 13 points on 4-of-9 shooting in the loss. Photo by Donald Crocker.

Coming off a disappointing home loss to Seton Hall for its first Big East loss of the season, the Butler men’s basketball team was looking to get back on track against DePaul, a team winless in conference play. Instead, the Bulldogs were outplayed on both ends of the court, turning the ball over 17 times in a 79-66 road loss to the Blue Demons in their worst performance of the season to date. Butler is now 15-3 on the season and 3-2 in Big East action.

Here’s a look at some of the key storylines, stats, and notes from the Bulldogs’ second-straight loss.

DePaul’s victory snapped Butler’s 11-game winning streak against the Blue Demons. The Bulldogs hadn’t lost to DePaul since Jan. 2014, when the Blue Demons won 99-94 in Indianapolis.

Coming off just their second loss this season, the Bulldogs needed to get off to a strong start. That didn’t happen. Just over eight minutes into the first half, Butler was 2-of-12 from the field and 0-of-6 from beyond the arc and had turned the ball over six times. DePaul was up 22-6 before the midway point of the first half. The Bulldogs quickly dug themselves a hole that they weren’t ever able to climb out. Butler never led at any point in the game.

Turnovers were a major problem, again. Butler turned the ball over seven times in the first 10 minutes against the Blue Demons. At halftime, the Bulldogs had nine turnovers from seven different players. Things didn’t get any better in the second half, as Butler coughed up the ball another eight times. Despite a strong offensive day from the Blue Demons, DePaul did have some slow stretches of scoring in the second half. But the Bulldogs were unable to make up nearly any ground in large part due to turnovers, many of which were simply due to sloppy mistakes. Butler has now turned the ball over 17+ times in three of its five Big East games.

Butler had no answer for DePaul’s Paul Reed. The junior forward, who entered the contest averaging 15.5 points per game and shooting 54% from the field, knocked down each of his first eight field goal attempts. He finished 8-of-9 from the field, 2-of-3 from beyond the arc, and 5-of-5 from the free throw line with nine rebounds. Reed didn’t miss a shot until there was under two minutes left in the game. Butler’s interior defense, a big strength this season, couldn’t slow the 6-foot-9-inch Reed.

Perimeter defense was a major problem. DePaul entered this game shooting just 27% from beyond the arc in conference play, the second-worst mark in the Big East, and 33% on the season. Against Butler, the Blue Demons were 10-of-17 – 59% – on 3-point shots. While some of this was simply shots dropping, Butler also gave DePaul too many open looks from the perimeter, and it cost them. Just under half of the Blue Demons’ shots and nearly 40 percent of their points came from 3-point shots.

And fouls were another key issue. The Bulldogs sent the DePaul to the charity stripe for 32 free throws, of which the Blue Demons knocked down 25. Butler simply committed far too many sloppy fouls, making contact with DePaul players on 3-point shots and sticking an arm or leg in while a player was driving to the basket.

Aaron Thompson had another rough game. The junior guard has had a few subpar games in conference play, turning the ball over too frequently and not generating as many assists as normal. While he tallied six assists against DePaul, he also had four fouls, five turnovers, and was just 2-of-6 from the field.

The Blue Demons 79 points are the most Butler has surrendered in a game this season. At the beginning of the week the Bulldogs were holding opponents to an average of 54.4 points per game and hadn’t given up 70 points in a game. Butler then set season-worst marks in two straight games, surrendering 78 points to Seton Hall at home and then 79 to the Blue Demons on the road.

Up next: The Bulldogs will continue their road trip, traveling to Pennsylvania to take on Villanova at 7 p.m. on Tuesday, Jan. 21. The Wildcats, ranked 14th in the most recent AP poll, are 14-3 on the season including 4-1 in Big East play, good for part of a tie for second in the conference standings. Villanova defeated DePaul in overtime 79-75 on Jan. 14 in its only conference game of the week before defeating UConn 61-55 on Jan. 17. The Wildcats, currently 28th at KenPom and 20th in the NET rankings, have won their last four games against the Bulldogs.