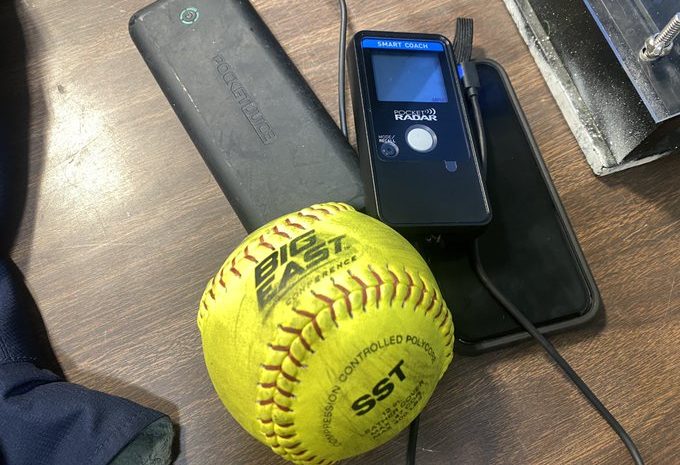 Launch angle, attack angle, spin rate, exit direction, spin direction. They all sound like words you would use in a United States military board room. In reality, these metrics are what the Butler baseball and softball programs hope will translate into future Big East championships.

The two programs have taken a deeper dive into the world of analytics for player development and game analysis over the last few seasons. Butler has made the investment in software that measures statistics like launch angle – the vertical angle at which the ball leaves the bat – or spin rate – the rate at which the ball spins during flight.

This isn’t a new wave. Butler coaches Dave Schrage and Scott Hall are by no means pioneers for analytics in baseball and softball. After all, baseball has always been known as a numbers game. Sabermetrics, which measure in-game activity, can be traced back to the early 70s in MLB.

But the growing trend of analytics in professional baseball and softball has trickled down to college game, and Schrage, who’s entering his fourth season as Butler baseball head coach, couldn’t be happier.

“I love everything that metrics are able to teach us about a pitcher or a hitter,” Schrage said. “I love to see the game evolve in any way that it can, because I think the metrics that we are gathering about our players help us understand our players better.”

Both teams utilize a program called Rapsodo, a triangular shaped pitching monitor, for hitting and pitching development. It helps measure anything from the break of a player’s pitch to the exit velocity of a player’s at-bat.

Another tool the programs use, called Blast, is a small round product that connects to the end of a players bat. It’s hardly noticeable but can compile metrics like bat speed, attack angle and number of swings a player has taken in the batting cage.

The two products connect to mobile apps and allow players to view their own metrics live and assess each swing while at the hitting facility. Players can also see a live view of MLB stadiums like Wrigley Field to assess how far they would have hit the ball.

Butler baseball has used Blast for the last three seasons and Rapsosdo for the last two seasons. Butler softball starting using Blast last February. This will be the softball program’s first season with Rapsodo’s capabilities.

“For us, the biggest thing with this kind of software is accountability, because we can track how many swings a player puts in,” Hall, now in his 10th season leading Butler softball, said. “If they’re really struggling we can look at how much work a player is actually putting in to help change their mechanics.”

The softball program at Butler has continued to make efforts to better understand metrics ever since senior Madi Christiansen stepped foot on campus. She said she has seen a noticeable difference since the program started using the new software.

“At first I didn’t notice a ton of buy in with the programs just because of the timing of when they introduced it, but as we have become more familiar with things like Blast I feel like it changed the perspective on our offseasons a little bit,” Christiansen said. “You can only do so much in the winter, so this adds to what we are capable of.”

With the help of assistant coach Angie Bain, Butler softball is able to use Blast to formulate drills in practice. How big, or small, a certain metric is for a player can help the coaching staff hone in on a player’s needs and maximize time in the limited practice time a team gets each week.

Schrage and Hall both mentioned that these types of software help promote “self-coaching” and make it easier for players when they are putting in time away from the team. They can also help a player like Brody McGrath, senior infielder, see things that the naked eye can’t see.

“Software like Blast and Rapsodo just have so many benefits that I think the natural side of the game doesn’t,” McGrath said. “They can help train us in what the human eye can’t see, and I think that’s a crucial aspect to have.”

But they aren’t just toys. Schrage said they are necessary tools for finding an edge in an ever-competitive collegiate landscape.

Analytics became particularly important for the baseball program last season when MLB scouts were evaluating former Bulldog pitcher Ryan Pepiot, who was both selected by the Los Angeles Dodgers in the 2019 MLB Player Draft. Schrage learned that MLB teams will write off a player if the spin rate of his fastball isn’t at a level that they deem necessary for a major league pitcher.

The baseball program even went as far as hiring two Butler students solely to compile metrics and analytics about the Bulldogs and their opponents.

“We have it because at the end of the day everyone else has it, so if we aren’t trying to evolve ourselves then we’re simply going to be left behind by other programs at our level,” Schrage said. “MLB scouts are coming to us and asking us what a guy’s spin rate is or what his exit velocity is at the plate.”

Though technology and metrics can bring a wealth of benefits for programs, Hall is careful to mention the fine line between technology coaching and players putting in the work.

“At the end of the day we won a Big East championship in 2016 without the help of Blast and Rapsodo,” Hall said. “The player still has to go out and do the work, this just helps us to better understand our players and become better coaches.”