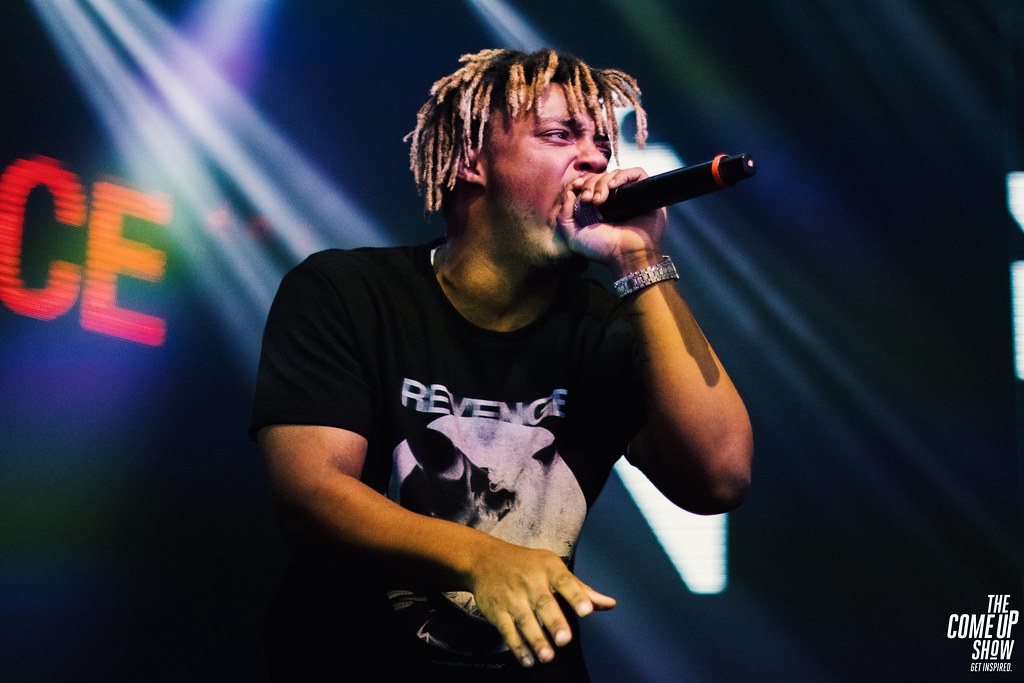 Juice Wrld, or Jarad Anthony Higgins, was a Chicago-based rapper. He went to the same high school as staff reporter Donald Crocker. Photo courtesy of flickr.com.

Jarad Anthony Higgins, better known as Juice Wrld or Juice, took the rap world by storm during his successful and short-lived music career.

His debut album “Goodbye & Good Riddance” went platinum and his second album “Death Race for Love” reached number one on the Billboard 200.

Higgins and I both went to Homewood-Flossmoor High School, and he set an example to people there that if you put in the work, you can make it to the top. Homewood-Flossmoor students watched him grow from some of his early songs like “Moonlight” to collabing with some of the biggest names in music like Ellie Goulding and Travis Scott over the span of a few years.

We were his biggest fans.

The 21-year-old tragically died at a Chicago airport after travelling from Los Angeles via private jet. Higgins reportedly had a seizure and went to a nearby hospital where he was later pronounced dead.

According to a report from the Chicago Tribune, Higgins began convulsing and was administered two doses of Narcan, an emergency treatment when opioid overdose is suspected.

After an autopsy was released, more testing is required to determine the cause of death, including toxicology studies to identify any narcotics in his system.

Regardless of the cause of his death, the glorification of drugs by the hip hop world is once again relevant, especially knowing that Higgins explicitly talked about his drug addiction in many of his songs.

Juice Wrld never glorified drug abuse but rather used his platform to talk about his addiction with the hopes of helping others going through the same thing he was. His openness to address his drug addiction was something positive that is now gone.

His girlfriend, Ally Lotti, had an interaction with Higgins on Twitter, asking him to stop drinking codeine. It ended with him saying that he would give up codeine and that “Addiction kills all.”

Bae I’m sorry I be tweaking, you’ve put up with more than ppl know I know I be scaring you, fuck Codeine I’m done. I love you and im letting it be known publicly that ain’t shit fucking up the real love I found. Learn from this everyone. Addiction kills all but you can overcome https://t.co/VB3qxHXodL

Obviously, his close ones were trying to put him on the right track but something like this should’ve been prevented. Fans, friends and family of rappers need to do more so people like Juice Wrld won’t have to go through drug addiction.

I’m not going to act like I’m a saint and haven’t supported artists who explicitly show their addictions through either their music or social media. But after someone so important to my community died, I can’t sit idly by and not speak up. We shouldn’t wait until another young artist like Juice Wrld dies to have this conversation.

Drug addiction is not something which is easy to overcome. I can’t imagine the mental struggles rappers like Lil Peep and Mac Miller went through before they passed.

Substance abuse has been glorified as long as hip hop has been around. It’s a generational cycle. Kids grow up listening to their favorite artists drinking lean or taking percocets and think it’s OK to do so.

Lil Wayne and Future are some of the biggest influences on this generation of rappers, and both have heavily endorsed the use of lean and pills throughout their careers.

Rapper Joyner Lucas came to Twitter to talk about Juice Wrld and the glorification of drugs in hip hop. Attached to the tweet is an interview Higgins did with No Jumper where he explains that Future made him want to try lean at the young age of 11 or 12.

Lucas blames the older generations of hip hop for heavily influencing rappers like Juice Wrld into continuing the cycle of drug abuse.

At some point, up-and-coming rappers will try the drug out to be just like their favorite rapper. Then they become addicted, and the cycle restarts.

This cycle cannot continue any longer.

I would suggest that people educate themselves. Whether you are the abuser or a close one of an abuser, it’s crucial that you educate yourselves.

Reach out to the professionals and gain information and counseling. Drugs never have been and never will be the answer to depression or anxiety. More times than not they make these issues worse.

If you know somebody who abuses drugs, urge them to seek help instead of standing by and letting them slowly kill themselves. Too many young artists are dying from popping pills or doing any other type of hard drugs.

A practical solution could be for music labels to check on their artists or have in-house mental health specialists to work with them. Since more and more artists have been expressing their mental health issues through their music, I’m surprised labels aren’t doing more to make sure their artists are mentally well.

Another solution could be to pick up Juice Wrld’s torch by talking about the drug addiction that they go through. This is a good way to bring up the conversation and could be a way to solve drug abuse in the hip hop world.

Trippie Redd is one of the many artists of this generation who has made music about pills and lean in the past but recently, he’s been an advocate for rappers to stop abusing hard drugs.

He went to Instagram to speak his mind about drug abuse in rap. He urges rappers to distance themselves from lean and pills, and if they choose to do any drugs, smoke marijuana.

This should be the last straw for everybody. Even Juice’s contemporaries are standing up and saying enough is enough. Juice had so much potential and so much more to offer to the world. I can only imagine all the great music that he would have produced over his music career. Now we will never get to experience it.