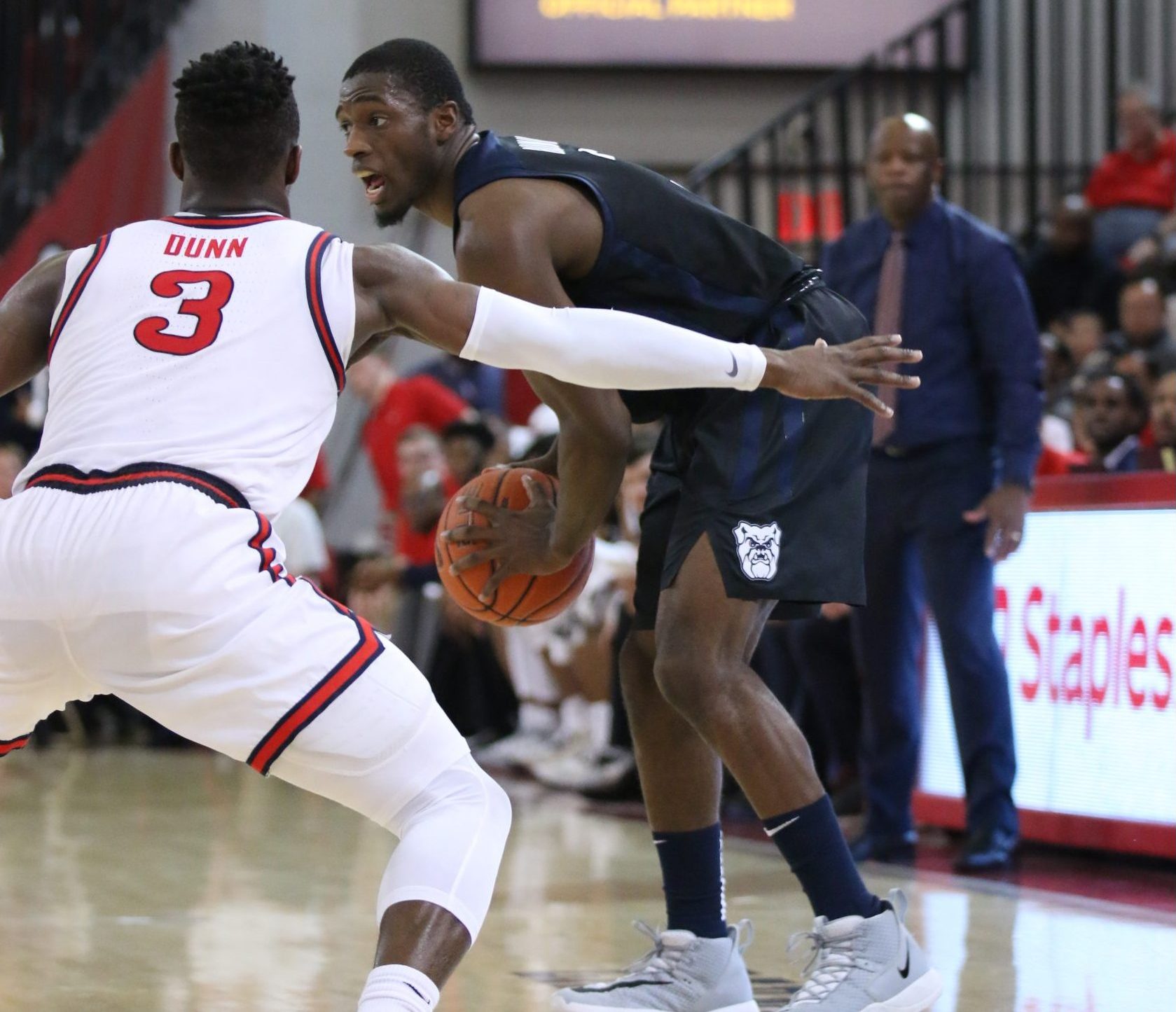 Kamar Baldwin looks for an open move during Butler’s 60-58 win over St. John’s on Dec. 31. Baldwin knocked down a career-high five 3-pointers in the game. Photo by Xan Korman.

The Butler men’s basketball team ended the decade and started Big East play with what was without a doubt the wildest game of its season to date.

After playing to a tie midway through the first half, Butler went on a 23-2 run to end the half, built up as much as a 23-point lead, blew that lead in a matter of minutes, trailed by as many as five points and then went on a 7-0 run – capped off by a Christian David 3-pointer – to walk out of Carnesecca Arena on New Year’s Eve with a 60-58 win over St. John’s.

Here’s a look at some of the key news, stats and notes from the chaotic victory:

Offensively, Butler’s late first-half run was led by Kamar Baldwin and Sean McDermott. After a 14-14 tie just over 12 minutes into the game, McDermott went on a personal 7-0 run to kick start the Bulldogs’ 23-2 run to end the half. McDermott ended the first half with 10 points, while Baldwin knocked down four triples to tally 14.

With Baldwin sidelined for much of the second half, St. John’s turned the tables on the Bulldogs. The Red Storm went on a 37-9 run to begin the second half and take a 48-46 lead with 6:49 remaining. As mentioned, that lead grew to as much as five points with 3:08 left. For much of that run, Baldwin was sidelined with an ankle injury.

Some last-minute heroics from Baldwin and David saved the day for the Bulldogs. After a pair of free throws from Jordan Tucker, Butler trailed 58-55 with 2:36 remaining. Baldwin knocked down a right-handed bank shot to bring Butler within one point, and David hit a deep 3-pointer with 43 seconds remaining to give the Bulldogs the lead and the win.

Baldwin snapped out of his shooting slump, but the extent of his ankle injury wasn’t immediately clear. The senior guard entered Tuesday’s game shooting just 14% –  4-of-28 – from the field over his last three games. Baldwin snapped out of that funk against St. John’s, knocking down four 3-pointers in the first half and a career-high five triples in the game. He led the Bulldogs with 19 points on 7-of-13 shooting despite only playing 27 minutes. After the game, Baldwin was seen wearing a walking boot on his left foot. His injury status was not clear.

A historic number of turnovers plagued the Bulldogs in this game. Butler entered the game averaging just 10.4 turnovers per contest, the fifth-best mark in the nation. The Red Storm, meanwhile, entered forcing an averaging of nearly 18 turnovers per game and with the 18th-fastest tempo in the country according to KenPom. St. John’s disrupted the Bulldogs’ rhythm, forcing 24 Butler turnovers, including 16 in the second half. Those 24 turnovers are the most the Bulldogs have committed in a game this decade.

The Bulldogs did dominate on the glass, out-rebounding St. John’s 46-24. Bryce Nze and Sean McDermott both finished with double digit rebounds with 12 and 10 boards, respectively.

The Bulldogs have won their conference opener for just the second time since joining the Big East. The Bulldogs are now 2-5 in the first conference game of the season during the Big East era. The team lost its first four such games before defeating Georgetown 91-89 on the road in double overtime in 2017. St. John’s, meanwhile, is now 1-7 in its last eight Big East openers, with its only victory during that stretch coming against Butler during the 2016-17 season.

Butler’s victory snapped St. John’s seven-game winning streak. The Red Storm hadn’t lost since Nov. 23 – an 80-67 loss to Arizona State – and were coming off a 70-67 win over then-16th ranked Arizona.

Up next: The Bulldogs will return to Hinkle Fieldhouse to host the Creighton Bluejays at noon on Saturday, January 4 to open up home conference play. Creighton received 10 votes in the most recent AP Top 25 poll and will host Marquette on Jan. 1 before traveling to Indianapolis. The 11-2 Bluejays are in the midst of a seven-game winning streak, with victories over Texas Tech, Oklahoma and Arizona State in that stretch. Their two losses are a road contest against Michigan and a neutral court game against San Diego State.