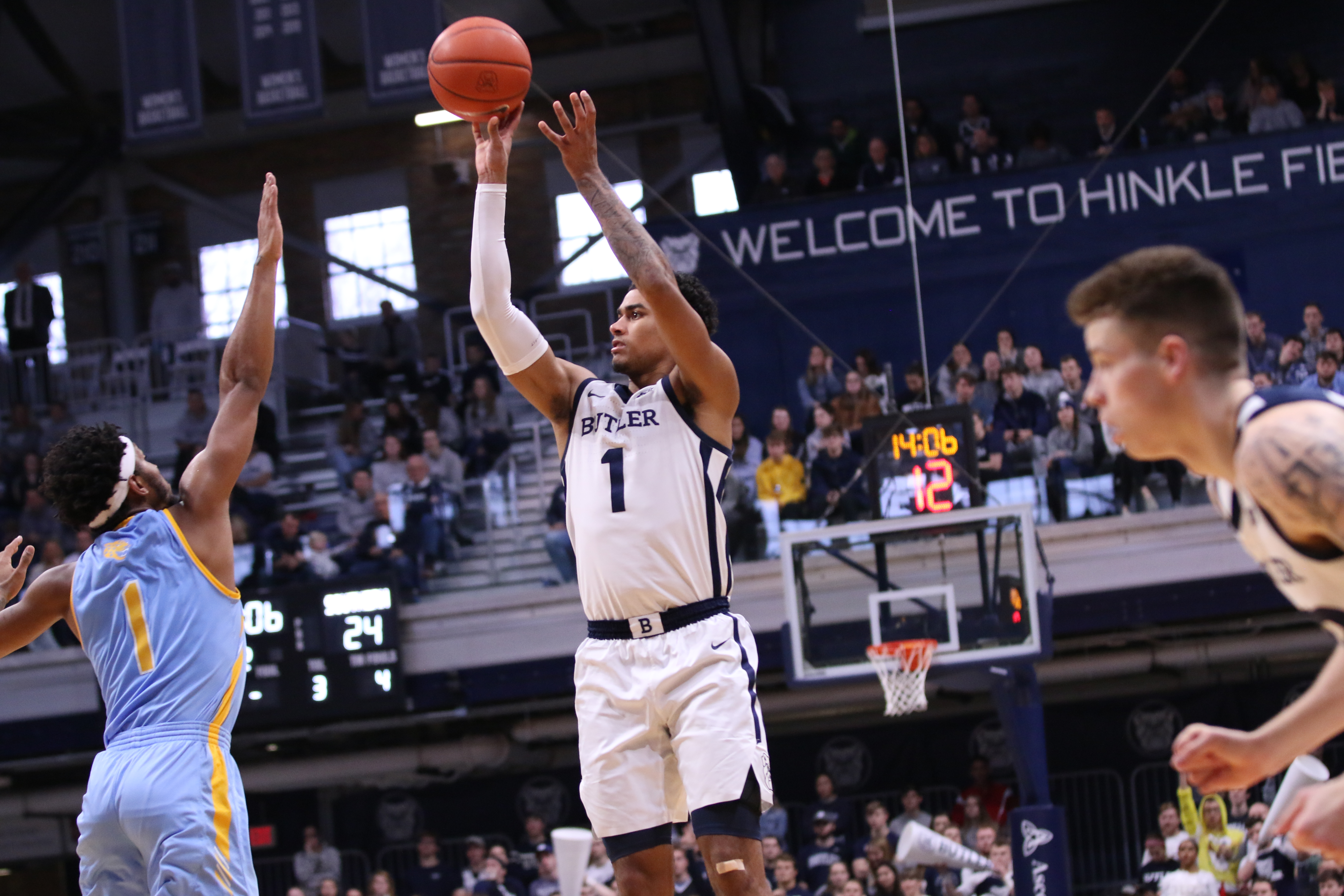 Jordan Tucker takes a 3-pointer during Butler’s 66-41 win over Southern on Dec. 14. Tucker scored eight points on 2-of-5 from the field. Photo by Xan Korman.

The Butler men’s basketball team got back in the win column following its first loss of the season, defeating Southern University 66-41 behind double-digit performances from three players and additional contributions throughout the roster to improve to 10-1. Two Bulldogs also made their season debut. Here’s a look at some of the key news, stats, notes and quotes from the victory:

And nearly everyone got in on the action. 11 players scored for the Bulldogs against Southern, another season high. The previous best was nine players on the scoreboard vs New Orleans and Wofford on Nov. 9 and 16, respectively.

With their victory, the Bulldogs have now won 57 consecutive nonconference home contests. That’s the longest such streak in the country. Butler hasn’t lost a non-league game at Hinkle Fieldhouse since falling to Pittsburgh in the semifinals of the 2012 CBI Tournament.

After a rough start at Baylor in the team’s last game, Butler head coach LaVall Jordan said he was pleased with the tone the Bulldogs set early against Southern. “We talked a lot about setting the tone,” Jordan said. “I thought the way we started the game – held them scoreless for a while – set a pretty good tone. They had quick hands, and we were figuring out how we could make passes and deliver and be able to execute offensively.”

The Bulldogs limited the Jaguars to just 41 points, marking the eighth time in 11 games this season Butler has held an opponent to under 60 points. Butler’s scoring defense was ninth in the country through games on Dec. 12 with just 55.9 points allowed to opponents per game.

Khalif Battle continued to show improvements on both sides of the ball. Battle scored 10 points – the most he’s had since 11 in Butler’s season opener against IUPUI – on 2-of-4 from the field and also had four rebounds. Junior guard Aaron Thompson said Battle has also made tremendous strides defensively. “I think he’s starting to get the hang of [Butler’s defensive scheme],” Thompson said. “He’s a great on-ball defender. He moves really well. Once he learns how to get his hands off and not put his hands in the cookie jar, I think he’ll be really good defensively.”

Southern’s 16 points in the first 20 minutes are the fewest Butler has given up in a half this season. Baylor’s 19 points in the second half on Dec. 10 were the previous best mark for the Bulldogs.

Derrik Smits and Markeese Hastings played for the first time during the regular season. The 7-foot, 1-inch grad transfer from Valparaiso played in Butler’s two exhibition games but hadn’t seen game action since due to knee injuries. Against Southern, Smits looked a bit rusty, but that wasn’t surprising. He scored two points on 1-of-2 from the field and tallied three rebounds in 11 minutes of action.

Butler head coach LaVall Jordan said he was pleased to see Smits and Hastings back out on the court. “I told [Smits] there’s no expectations, just want to get you out there running up and down the court in a game. … I thought he did a great job of executing while he was out there. A lot of the rust will come off as he continues to practice. … Markeese did what Markeese does. Got three rebounds in three minutes. Good to see him after what he’s been through in the last year, year-and-a-half, battling to have that opportunity.”

Southern head coach Sean Woods had high praise for Butler. “They do everything right, they don’t make any mistakes, they stay simple,” Woods said. “They do two things well. One, they defend the three. Two, they keep the ball out of the paint. The Jaguars scored just eight points in the paint compared to Butler’s 22.

Up next: Butler will have finals week off from game action before taking on Purdue in the Crossroads Classic at Bankers Life Fieldhouse on Saturday, Dec. 21. The Boilermakers received votes in the most recent AP Top 25 poll, and are coming off recent wins over No. 5 Virginia and Northwestern. Purdue is 6-3 on the season and will take on Nebraska and Ohio on the road before squaring off against the Bulldogs. The Boilers have won the last two matchups between the two teams.