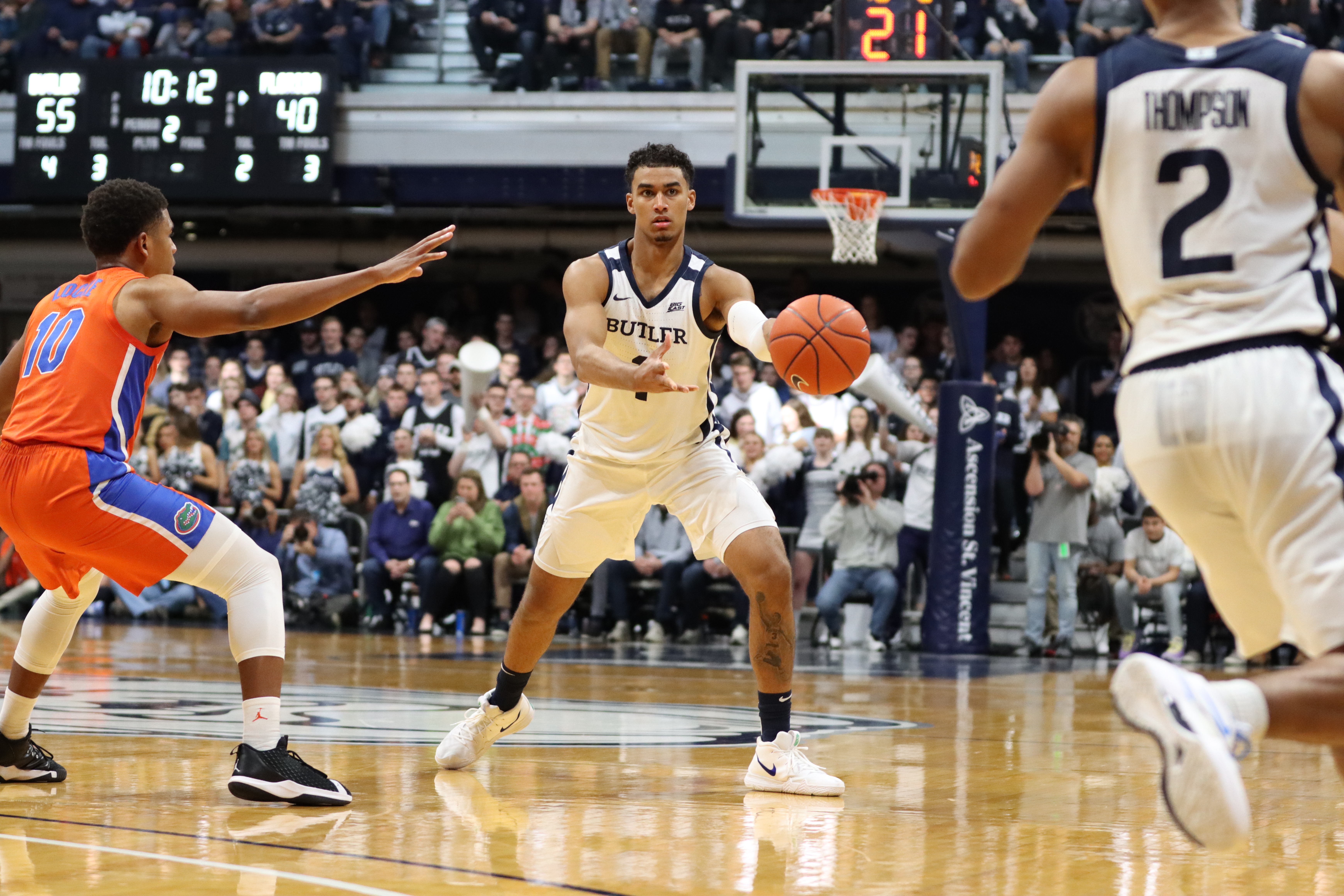 Jordan Tucker passes the ball to a teammate during Butler’s 76-62 win over Florida on Dec. 7. Photo by Chandler Hart.

Sean McDermott and Aaron Thompson scored 16 points each while Kamar Baldwin and Jordan Tucker both finished in double digits as the No. 24 Butler men’s basketball team defeated the University of Florida 76-62 at Hinkle Fieldhouse on Dec. 7. Here’s a look at some of the key news, stats, notes and quotes from the victory:

Butler is off to a 9-0 start for the first time since the beginning of the 2006-07 season and just the third time this century. In 2006, the Bulldogs went 10-0 to start the year under head coach Todd Lickliter before falling to Indiana State. That season Butler advanced to the Sweet 16 of the NCAA Tournament before falling to the eventual national champion, Florida, 65-57.

With their victory, the Bulldogs have now won 56 consecutive nonconference home contests. That’s the longest such streak in the country. Butler hasn’t lost a non-league game at Hinkle Fieldhouse since falling to Pittsburgh in the semifinals of the 2012 CBI Tournament.

Sean McDermott just kept shooting… and it worked. The redshirt senior guard started 0-of-4 from the field, with all shots coming from beyond the arc. “Everybody kept encouraging me to just keep shooting it,” McDermott said after the game. And after that stretch, he finished the game 4-of-5 from the field, tallying 16 points – the most McDermott’s had in a game since the Bulldogs’ season-opener against IUPUI when he scored 26.

Butler defeated the Gators in the first ever game between the two teams at Hinkle Fieldhouse. The first three matchups were in the NCAA Tournament, while the two most recent occurred last season at the Battle 4 Atlantis in the Bahamas and in Gainesville, Florida. The all-time series is now tied at three wins apiece.

Butler head coach LaVall Jordan said the team isn’t focused on winning streaks. “We don’t talk a lot about winning and losing,” Jordan said. “It’s all about the standard that we want to play to … These guys are hungry to be excellent. Excellence isn’t perfection. What your habits are make you excellent … They practice like we’re in last and play with the confidence like we’re up there at the top.”

Butler’s 76 points mark just the first time in nine games this season the Gators have given up more than 67 points. Florida entered the game ranked 27th nationally in KenPom adjusted defensive efficiency.

Aaron Thompson had one of his best games of the season. Thompson’s 16 points tied for the team lead, and are the most points the junior guard has scored in a game this season. Thompson finished just two points of his career high on a nearly perfect 6-of-7 from the field.

With his seven assists, Thompson led Butler in that category for the ninth game in a row to start the season. Thompson’s six assists per game entering Saturday were tied for 23rd in the country through games on Dec. 6. And after turning the ball over six times against Ole Miss, Thompson didn’t turn the ball over once against the Gators.

Jordan Tucker had one of his best performances off the bench this season. With McDermott struggling to score early, Tucker stepped up, knocking down a few crucial threes in the first half. The junior forward finished with 13 points, marking the first time since Nov. 12 he’s scored in double figures.

Florida head coach Mike White was clearly not pleased with his team’s performance. “We’re painfully immature as a team right now,” White said. “And we’ve got to mature. … We’ve got a bunch of guys that have just not experienced success at this level.”

Up next: After just one game back at Hinkle, the Bulldogs will hit the road once again, traveling to Waco, Texas, to take on Baylor as part of the Big East/Big 12 Battle games. The Bears, coached by Butler grad Scott Drew, are ranked 18th in the most recent AP Top 25 poll, and are 7-1 on the season after defeating No. 12 Arizona 63-58 at home on Saturday.