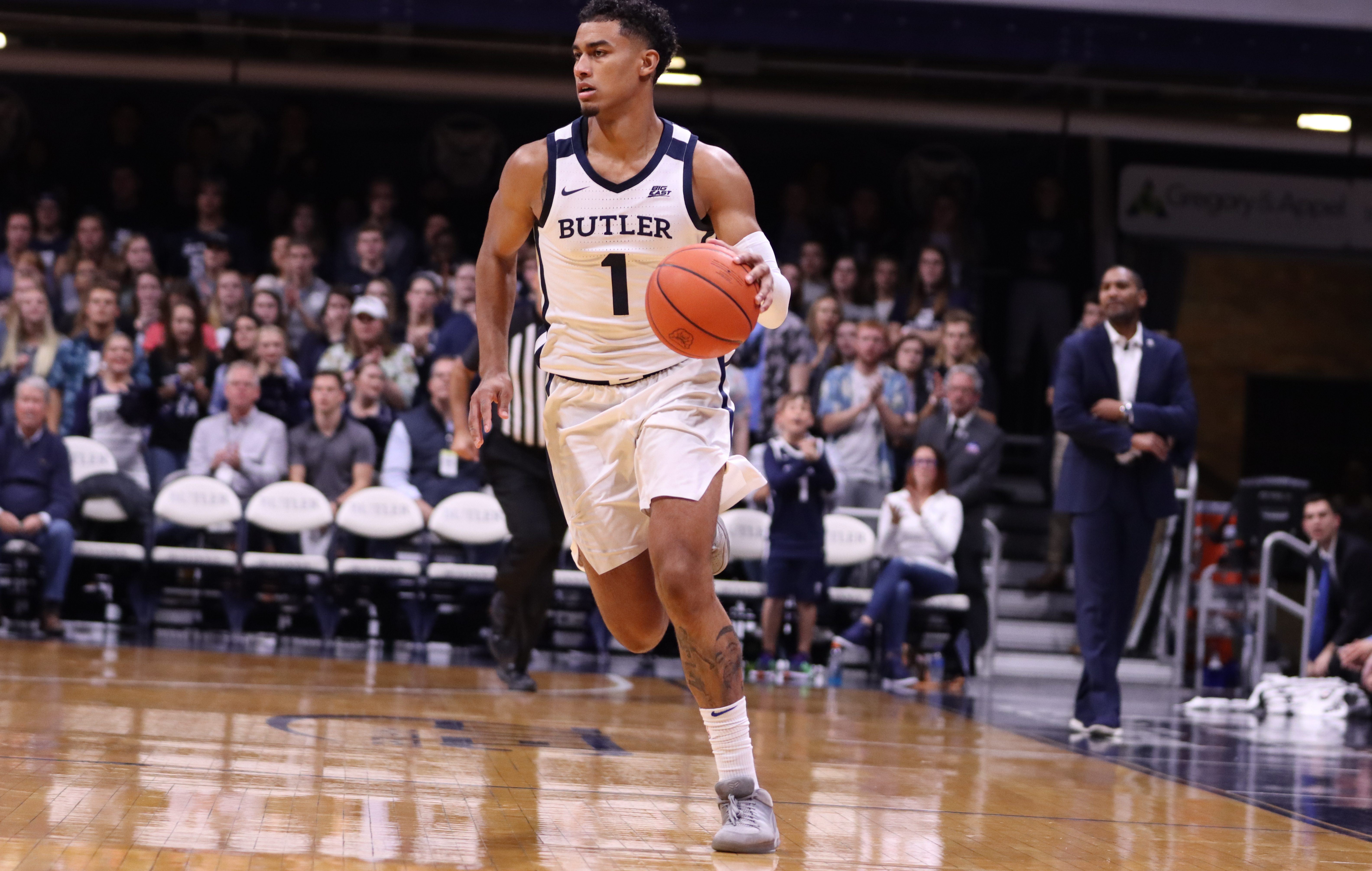 Jordan Tucker dribbles the ball up the court during a game against IU Kokomo. Tucker begins his first full season with the Bulldogs in 2019-20. Photo by Chandler Hart.

The Butler men’s basketball team is locked and loaded to rebound from an NCAA tournament miss last year. With the Bulldogs having a tough schedule this year, here is a synopsis of the opponents for the games that you don’t want to miss.

The Gophers had one of their best seasons in the past decade, as they were able to win 22 games and earn an NCAA tournament bid. However, they have many personal question marks as the team is losing seven total players, including key contributors in Amir Coffey, Dupree McBrayer and Jordan Murphy. The team will look to answer their personnel issue with their recruiting class, which includes three-star recruits Sam Freeman, Bryan Greenlee and Tre Williams, and four-star power forward Isaiah Ihnen, who is a top 100 prospect. This is a tournament qualifying team that will allow the Bulldogs to test themselves against a quality opponent.

The Tigers have put together a talented roster over the offseason and have a lot of hype surrounding them. This team has added several offensive weapons with incoming freshmen trio of forwards Kobe Brown and Trey Jackson and guard Mario McKinney. Both Brown and Jackson are exceptional ball handlers and shooters, and will be a tough matchup for teams. Alongside the new faces is transfer Dru Smith, who head coach Cuonzo Martin calls the team’s “glue guy” that will hold them together. This will be a worthy SEC opponent that will offer the Bulldogs a challenge.

The Rebels shocked everyone last year as first-year head coach Kermitt Davis led Ole Miss to a 20-win season and an NCAA tournament bid. They have retained a large amount of veterans from last season, including team leader Breein Tyree and NBA prospect Devontae Shuler, who bring a nasty 1-2 punch from the backcourt. The Bulldogs were able to take care of the Rebels with ease last year, but Ole Miss improved as the season went on. This game should offer the Bulldogs tournament-like play, and a win will add to their tournament bid consideration.

Jay McCauley, who was Wofford’s associate head the last two seasons, will take over coaching duties for the Terriers as former head coach Mike Young leaves for Virginia Tech. McCauley inherits a team that won 30 games last season and made it to the second round of the NCAA tournament. Guards Nathan Hoover and Storm Murphy return as key players for the Terriers. This matchup will provide Butler with another tournament-level team and a resume builder for a bid if they should win.

The Pirates are also a team that has revved up a lot of preseason hype. The team retains its core group of contributors including AP Preseason All-American Myles Powell. Last year, the Pirates were able to pull off upsets against Big East rivals Xaiver and Villanova in the regular season. These two factors combined lead to the Pirates being ranked at No. 12 in the preseason polls. After falling at Seton Hall last year, the Bulldogs will look to redeem themselves with a road win  against a ranked opponent.

The Bears return a veteran-packed team following a 20-win season and a bid to the tournament. Junior star forward Tristan Clark will look to rebound from a season-ending knee injury the year prior. Key contributors of the Bears include sharpshooting guards Devonte Bandoo, who shot 39.5% from three last season, and Jared Butler. This is another ranked road matchup that will be tough but important for the Bulldogs.

The Bulldogs will look to make a statement against the ranked Boilermakers at the Crossroads Classic at Bankers Life Fieldhouse. This will be the two teams’ first matchup since their clash in the 2018 NCAA tournament. The Boilermakers come off a deep tournament run which led them to the Elite Eight. However, they lost their leaders of that run in Carsen Edwards and Ryan Cline. The Boilermakers do have an abundance of role players on their roster that can provide tough matchups no matter the makeup of your team.

Even though Villanova went on to place first in the Big East and win the NCAA tournament, these Wildcats are very different from the teams that won two championships in three years. They are still redefining themselves as a unit after losing core players Phil Booth and Eric Paschall to graduation. Even with the Wildcats bringing in a big recruiting class, the Bulldogs have an opportunity to take down the lead dog in the conference. This will be an interesting one at Hinkle for sure.

Basketball season doesn’t get any better at Hinkle than when rival Xavier comes to town. The Musketeers had an underwhelming season last year under first-year head coach Travis Steele, as they failed to qualify for the tournament in March. The team maintains their top scorers in forwards Naji Marshall, Tyrique Jones and guard Paul Scruggs. They also bring in two graduate transfers in forward Jason Carter and guard Bryce Moore. While this team may present the Bulldogs with a challenge, there would be nothing sweeter than managing an upset victory against their ranked rival at home.

The Gators showed the Bulldogs what they were worth last year during the teams’ two matchups. The Gators have only improved since then, while bringing in four-star recruit Omar Payne and five-star recruits Tre Mann and Scottie Lewis. They will fit well with returning star Andrew Nembhard. After the Gators dominating in Gainesville, this will be an exciting revenge game for the Bulldogs, as this will be the highest preseason ranked team they will face.