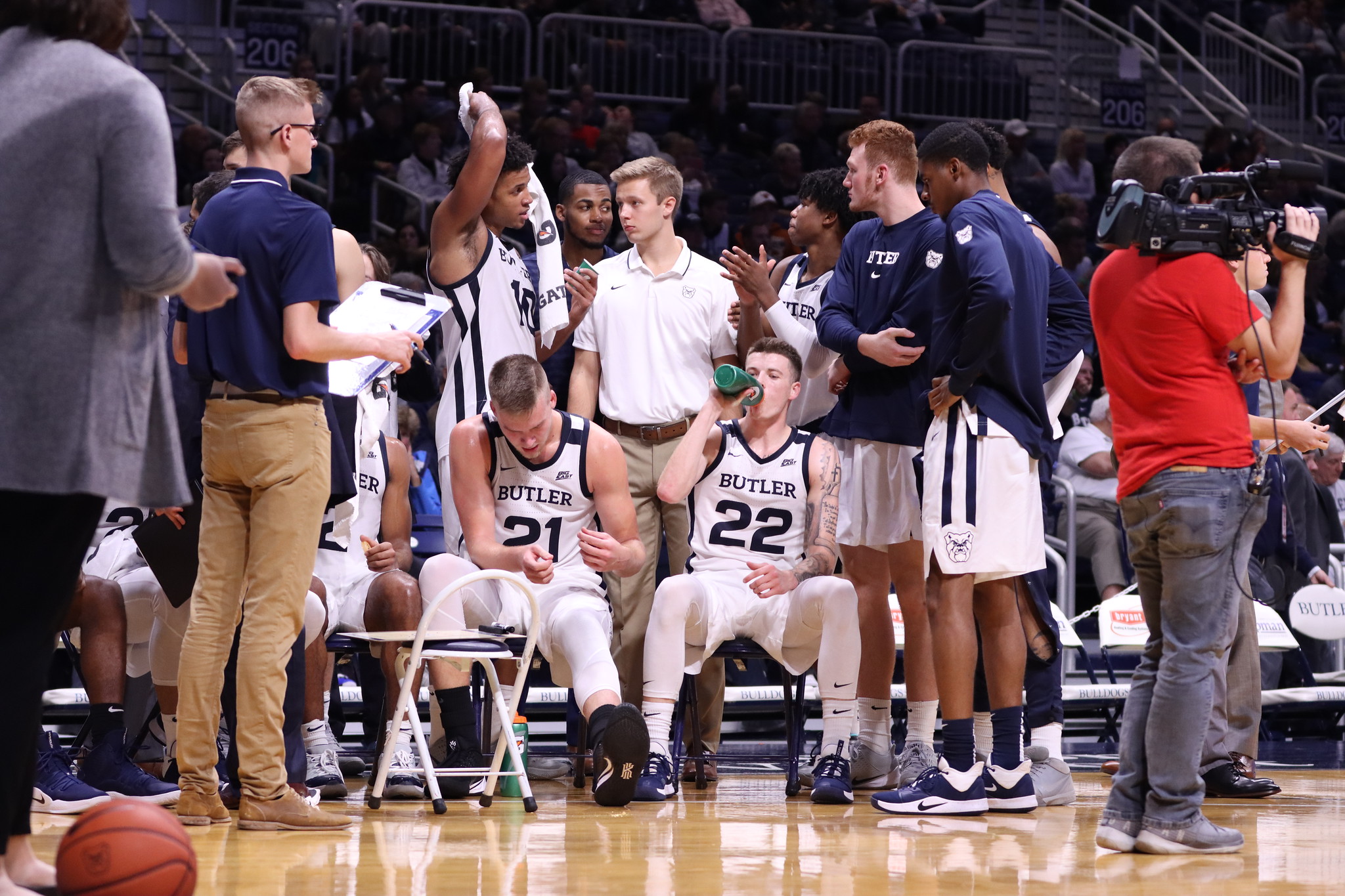 Butler’s men’s basketball team huddles up during the Bulldogs’ exhibition game against the University of Indianapolis on Nov. 1. The Bulldogs went 7-11 in conference play last season. Chandler Hart/Collegian file photo.

College basketball season is finally here. The Big East is once again one of the best conferences in NCAA basketball, if not the best. With powerhouses like Villanova, Seton Hall and Marquette, it will be interesting to watch the Big East this regular season and into March. Here are my predictions for what the Big East rankings will look like at the end of the season.

With so many returning players, including Collin Gillespie, Saddiq Bey and Jermaine Samuels, the Wildcats will continue their dominance of the Big East. Freshman Jeremiah Robinson-Earl is an early favorite for Big East Freshman of the Year. Jay Wright’s No. 10 Wildcats will be a tournament team this year with Final Four potential. A Villanova Big East Conference championship is a likely outcome for the 2019-20 season.

The Pirates are equipped with early player of the year candidate Myles Powell. As an AP Preseason All-American, his ability to score and lead his team will take Seton Hall far this year. Ranked 12th in the nation, Seton Hall will play some tough non conference games this year, including No. 1 Michigan State, No. 15 Oregon, and No. 7 Maryland. This should prepare them plenty for Big East play at the end of the season.

With superstar Markus Howard, Marquette will be a fun team to watch this year. However, with the transfer of Hauser twins, Sam and Joey, the Golden Eagles might struggle against top 25 opponents.

Ranked 19th in the nation, the Musketeers will be hard to beat. With players like grad transfer Jason Carter, Xavier has weapons and should be interesting to watch in 2019-20. However, with the strength of the Big East this year, the Musketeers will struggle in conference play against teams like Villanova and Seton Hall.

With senior talent like point guard Kamar Baldwin and sharpshooting forward Sean McDermott, the Bulldogs are hungry for a tournament run. Duke transfer Jordan Tucker has the potential to be a key player for Butler if he can shoot consistently from the arc and grab big rebounds. Four-star recruit Khalif Battle will be a player to watch in the Big East. Butler has the talent, but putting it all together and minimizing turnovers will define the season for the Bulldogs. The loss of center Joey Brunk means the Bulldogs will rely on newcomers in the post, which will prove to be damaging in Big East play.

After finishing fifth in the Big East last year, the Bluejays are definitely not a team to count out this year. However, Creighton lacks the superstar talent that top Big East teams possess. Creighton hasn’t stuck out as a team to beat since they had 2014 Wooden Award winner Doug McDermott. Creighton allowed around 74 points per game last year and only grabbed 35 rebounds per game in the 2018-19 season. Unless Creighton can grab rebounds and defend, it will struggle against the top Big East teams.

With internet-viral point guard Mac McClung, Georgetown will definitely be an exciting team to watch this season. However, the Hoyas’ lack three-point shooting ability and other talent besides McClung. The Hoyas will also have to defend better this year if they want to compete with the rest of the Big East. After giving up around 78 points per game last year, other players will have to step up on the defensive side besides McClung.

Finishing eighth in the Big East last year, Providence is coming off a disappointing 2018-19 season. The Friars only play one top 25 nonconference game – No. 4 Florida – leading up to Big East play at the end of the season. This will not prepare Providence for teams like Marquette and Butler. The Friars did not pick up any ranked recruits for the 2019-20 season which will force upperclassmen, like guard Alpha Diallo, to step up into big roles they aren’t ready for.

The Blue Demon’s head coach, Dave Leitao, is suspended for the first three games of the season for recruitment violations. It is hard to see DePaul being successful this season. The Blue Demons lack size, defense and shooting ability. It is very improbable that DePaul will be able to compete with top Big East teams.

St. John’s is coming into its first season with new head coach Mike Anderson. Coming off a disappointing 8-10 record in the Big East last year, it is very hard to see the Red Storm improving from that this season. St. John’s lacks size, defensive ability and ball handlers. A tournament run is very unlikely for St. John’s. The Red Storm will not be able to size up with any team in the Big East and will most likely finish last in the conference come March.