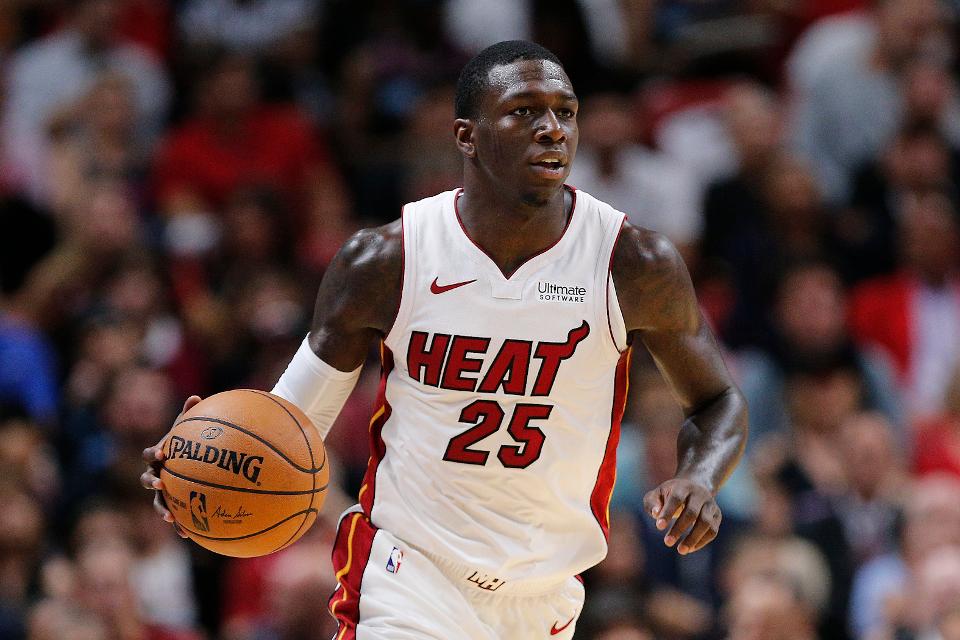 Kendrick Nunn scored 112 points through his first five games, the most ever by an undrafted rookie. Photo by Michael Reaves / Getty Images

Through the first few weeks of the young NBA season, one of the biggest surprise stories of the league lives in Miami. Despite all the offseason hype with the Miami Heat acquiri ng Jimmy Butler and newly drafted rookie Tyler Herro, nobody took a second glance at Miami’s undrafted rookie Kendrick Nunn. Nunn, undrafted out of Oakland University, is averaging 16.6 points and 2.6 assists through the Heat’s first nine games.

After spending most of last season with the Santa Cruz Warriors, the G-League affiliate of the Golden State Warriors, Nunn averaged 21.0 points, 6.3 assists and 5.0 rebounds in the 2019 NBA Summer League with the Heat. He was named to the first team all-NBASL for his performance. Yet still, Nunn received no national attention and hid in the shadow of Herro, who received most of the media coverage.

Following his strong summer in Las Vegas, Nunn was invited to join the Heat’s training camp for an opportunity to fight for a roster spot. Nunn capped off a solid preseason with a 40-point gem against James Harden, Russell Westbrook and the Houston Rockets to earn himself a spot on the Heat’s 15-man roster

Nunn quickly captured the attention of Heat head coach Erik Spoelstra, who rewarded Nunn with his first NBA start on opening night. And on Oct. 23, in just 27 minutes, Nunn posted 24 points, solidifying himself as the Heat’s new starting point guard.

After a 28-point game on national television against the Hawks, Nunn’s scoring total through his first five games added up to 112 points, the most points ever scored by an undrafted rookie in the first five games. And for Nunn, that’s an accomplishment most people never thought he would even be close to reaching after being dismissed from the team at the University of Illinois in 2016.

Following his misdemeanor battery charge, Nunn was dismissed from the Illinois basketball team. Nunn decided to transfer, and Greg Kampe, head coach of Oakland University, was willing to give him a second chance.

Prior to Nunn, Kampe had three players under him reach the NBA level in his 20 seasons as Oakland’s head coach. Khalil Felder, Keith Benson and Rawle Marshall all played in Oakland before stepping onto an NBA court. Kampe knew “there was never a question in [his] mind” that Nunn would compete at the next level as well, and went on to watch his senior average 25.9 points per game in his lone year at Oakland. That average was second in the country only to current Atlanta Hawks star Trae Young, who was then at Oklahoma.

“I was not easy on Kendrick,” Kampe said. “I was hard on Kendrick and he responded great every time I got after him.”

Yet, Nunn could not have reached the level he is currently on if not for the opportunity Kampe gave him at Oakland. Where the domestic violence allegations against Nunn could have derailed his career, Kampe’s decision to take on the Chicago native paid dividends to both sides.

“I’ve given a lot of players second chances over my time,” Kampe said. “What I like to say to people is, ‘alright, let’s take this player and pretend like it’s your child. What are you going to do with that. Are you going to throw him to the side? Or are you going to try and teach?’”

For Kampe, he sees all of his players, past and present, like his kids.

The path for Nunn’s NBA success is clear as day, and the Miami Heat organization has a knack for shaping players like Nunn into stars. TNT analyst Reggie Miller coined Nunn “a diamond in the rough,” and Nunn looks to be the first undrafted rookie ever to win NBA Rookie of the Year, an accomplishment he could not have even dreamed of if not for the opportunity both Greg Kampe and Pat Riley provided him with.