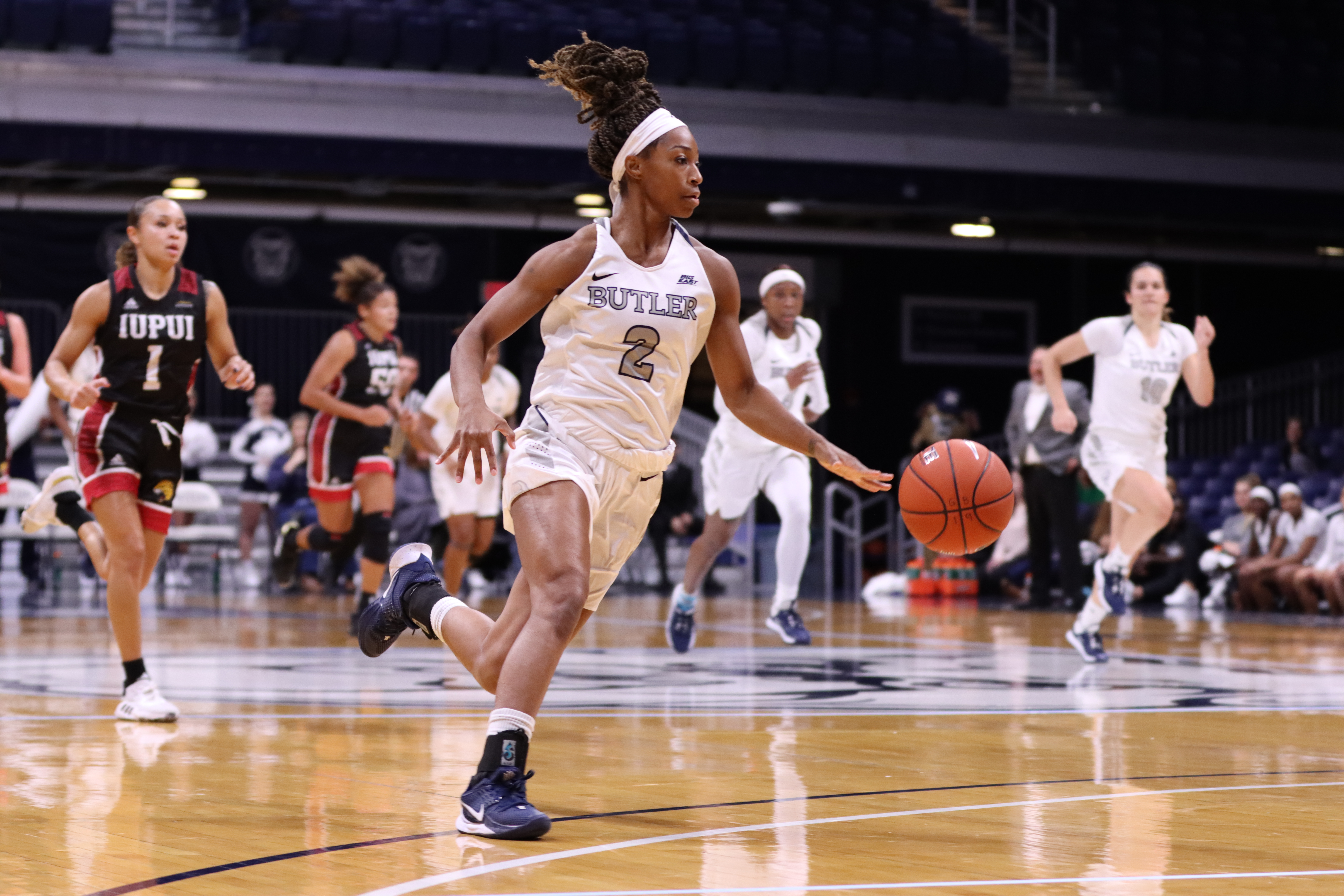 Genesis Parker dribbles the ball down the court against IUPUI. Parker had 23 points and made six 3-pointers. Photo by Chandler Hart / Butler Collegian.

Genesis Parker was unfazed. Each time after she sunk a three, Parker kept her composure, her facial expression stoic except the time when a defender bumped her. She sunk that shot, and though she likely lifted her arms wondering where the foul call was, one could see an outline of the patented Jordan shrug. She made six — out of seven —  3-point shots total, leading Butler with 23 points. Butler defeated IUPUI 64-61 on Nov. 20, improving to 4-0 and dropping IUPUI to 2-2.

The game didn’t get off to a smooth start. With 7:53 to go in the first quarter, Parker was benched. In the prior two plays, Parker had failed to come off a screen and failed to advance the ball quickly. There have been teaching moments like those before — head coach Kurt Godlevske watched film with Parker after the first game in which she struggled with turnovers. So, he has decided to make a positional change.

“When [Godlevske] put me back into the game, he wanted me off the ball,” Parker said. “That’s where he wants me now, going onto the rest of the season. That’s the role I’m gonna take on.”

Now, to start the season, this was supposed to be an expected change. Parker and Godlesvke both said that Parker would eventually be moved to the shooting guard position. But former starting point guard Tenley Dowell has been sidelined with a torn ACL. N’Dea Flye, who replaced Parker early in the first, was suspended for the first three games due to a violation of rules.

To her credit, Flye came in and produced. While the stat-sheet may not indicate as much — 4 points on 1-5 from the field, 2-8 from the free-throw line and 4 assists to 3 turnovers — 30 minutes saw Flye play in-your-face defense with two steals. Butler forced 20 turnovers, with Oumou Toure recording five steals, Kristen Spolyar, two, and three others, one.

A team effort was called for against a team like IUPUI, a team that a week before nearly upset 16th-ranked Miami. Butler hasn’t had a test like this, having won two games by 20 or more points — one by 32, and the other by 16. This game, it was IUPUI seniors forward Natalie Anderson, guard Holly Hoopingarner, and center Macee Williams who combined for 67% of the Jaguars’ scoring. The Bulldogs haven’t seen an inside-outside nightmare like them. In particular, Williams held Shae Brey to 1 point on 0/1 shooting in 30 minutes, while Hoopigarner and Anderson led the team in triples with three. A win against the Jaguars showed the team’s improving cohesiveness.

“We knew they were going to come in pretty good,” Katherine Strong said. “We knew they were a good team. We talked about in the locker room a day before about being a better teammate and together as one and communicating. We haven’t been in a close game at all this year, but it shows how we gotta come together and stay composed.”

After sparking a 19-11 first-quarter lead, the second and third quarter saw the Bulldogs lose by a combined score of 39-28. After IUPUI chugged a 13-3 run, Butler conceded their first lead of the season, down 43-47. At that point, with 3:18 remaining in the third quarter, Godlevske signaled for a timeout.

Butler regained the lead with 6:14 left in the fourth, but less than a minute later IUPUI earned it back, courtesy of a jumper by Rachel Mclimore. Then Genesis Parker hit two more three’s, including the go-ahead bucket. Spolyar and Flye combined for two free throws, and Shae Brey sealed the game with a steal at half-court.

To Parker, there are still improvements to be made.

“We tried to defend, we had to get on their shooters more,” Parker said. “That started to work towards the end, but we have to do that earlier, so it doesn’t come back to bite us.”

In their first road test of the season, Butler’s next game comes at Ball State on Nov. 23 at 1 pm.