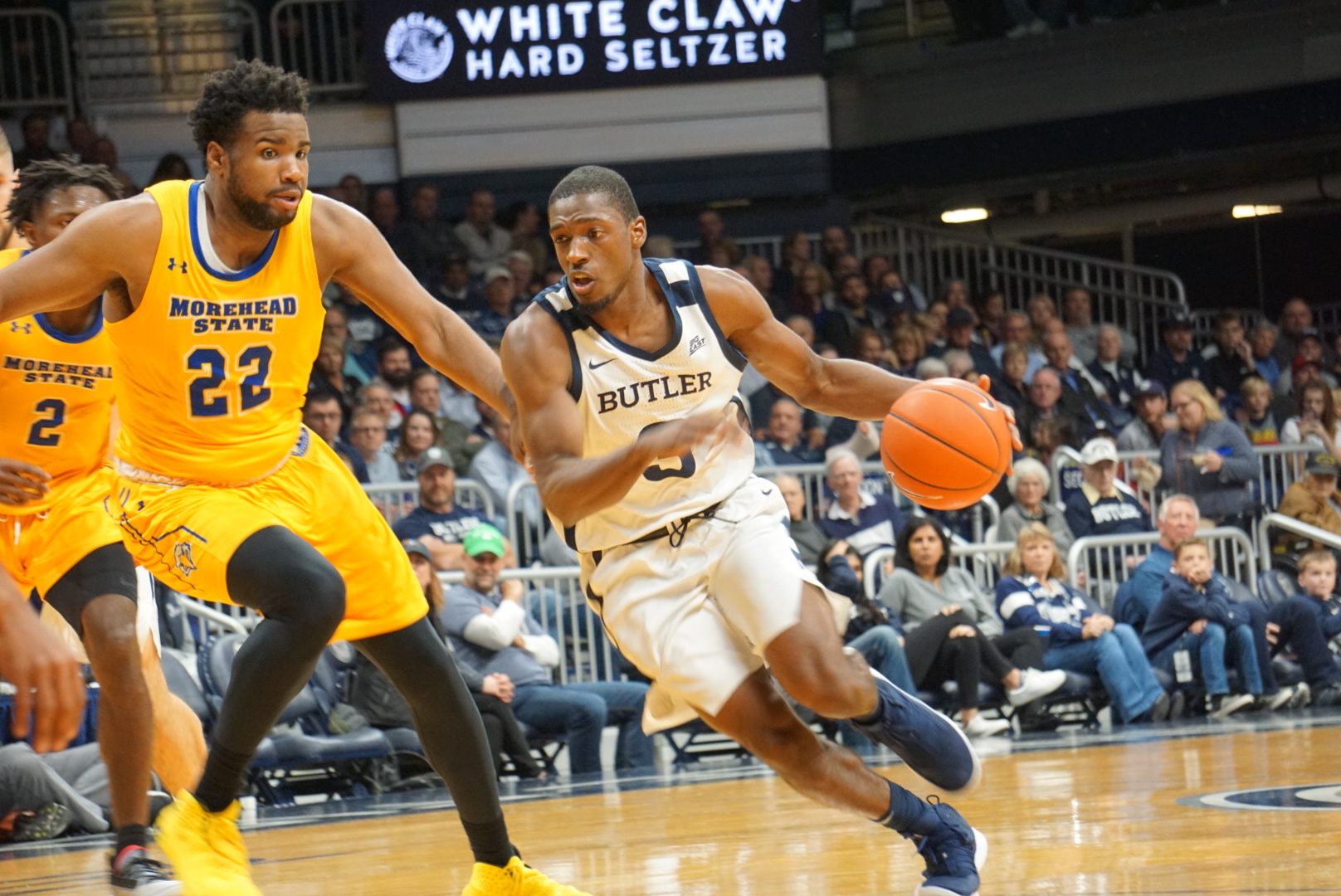 Kamar Baldwin makes a move against Morehead State on Nov. 22. Baldwin led all scorers with 17 points in the Butler win. Photo by Becca Atchley / Butler Collegian

A tale of two halves was the story behind Butler men’s basketball’s 68-50 win over Morehead State. Kamar Baldwin led the Bulldogs in scoring for the third straight night as they move to 5-0 on the season. Let’s go beyond the box score on a night that presented some positives and negatives.

1. Butler came out strong in the second half and didn’t look back.

Quite frankly, Butler looked sluggish early in this game. The effort and intensity weren’t quite there at the tip and it showed throughout the first half. The Bulldogs turned the ball over six times which resulted in nine points for a Morehead State team that thrives off of turning opponents over. After 20 minutes, Butler was just 11-of-29 from the field and 3-of-12 from deep. As a result, the halftime score was 30 to 30.

Butler improved in almost every way possible coming out of the break. The Bulldogs jumped out to a 16-5 run to begin the second half and took that control throughout the rest of the contest. After going 4-of-9 from deep in the first half, the Eagles shot just 9% from beyond the arc in the second half. Morehead State head coach Preston Spradlin and guard Justin Thomas credited Butler’s discipline on the defensive end, specifically in the second half when Butler ramped up its pressure and forced a lot of tough shots for the Eagles. In a perfect world, Butler plays a complete game, but the Bulldogs responded to a shaky first half by outscoring Morehead State 38-20 in the second frame.

2. The Bulldogs ball movement in the second half was much better than the first and it resulted in better offense.

The biggest difference in the second half was ball movement. In the first half, Butler assisted on just four of its 11 made baskets. In the second frame, the Bulldogs made 15 field goals and assisted on 10 of them. The ball movement directly resulted in better opportunities. Butler knocked down six threes in the second half and only turned the ball over three times because the ball was moving quicker and there was less dribbling — Morehead State has quick hands and was disrupting a lot of dribble-drive.

While the offensive did get better in the second half, Butler must do a better job finishing the good chances they get on that end of the floor. Part of Butler’s struggles in the first half were compounded by the fact that they weren’t finishing possessions even when they got good looks. Sean McDermott got three good looks in the first half and only made one. Jordan Tucker forced too many contested jumpers early in the contest. As the schedule gets tougher, Butler’s offense needs to get more consistent.

3. Butler did a solid job not turning the ball over against a team that forces a lot of turnovers.

Morehead State thrives on turning people over. Coming into tonight, the Eagles were forcing 17.4 turnovers per game and were averaging nearly 17 points off of those turnovers. Butler, in the second half, particularly, did a good job taking care of the basketball and not allowing the Eagles to get out and run. Eagles guard Justin Thomas said after the game that they pride themselves on turning the ball over and using that to get easy points in transition. The Bulldogs only turned the ball over three times in the second half which only resulted in two points off turnovers for Morehead State. Butler’s half court defense was elite in the second half and by taking care of the ball they forced the Eagles to operate in the half court. Of course, fewer turnovers resulted in better offense, but it also put Butler’s defense in a better position in the second half.

We are going to find out for real about this Butler basketball team over the next two weeks. From Nov. 25 to Dec. 10, the Bulldogs play five games against five different power five teams including preseason top 25 teams Florida and Baylor. Two of those five games will be played in true road venues and only one will be in the safety of Hinkle Fieldhouse. The next two weeks are big time for Butler.