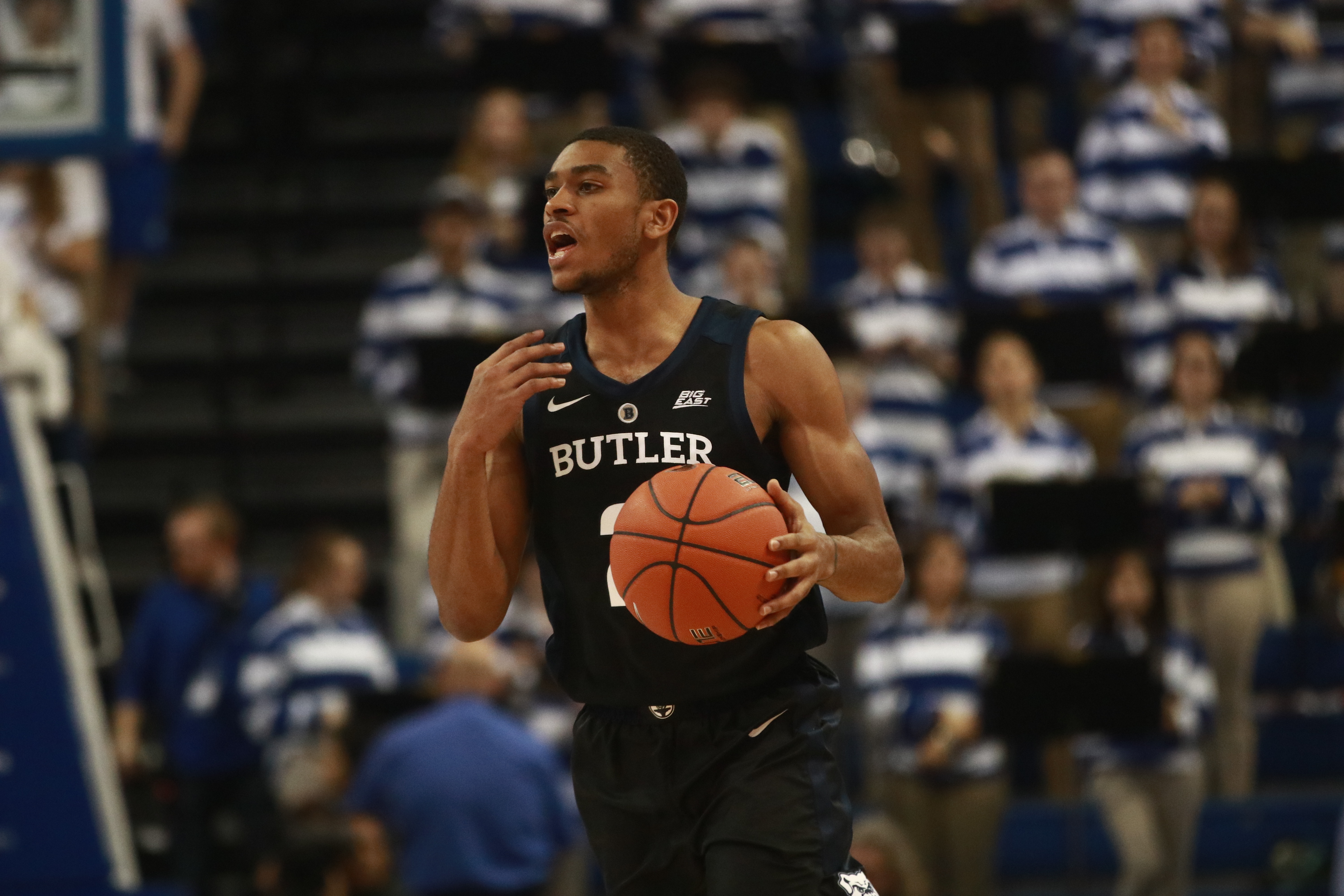 Aaron Thompson calls out a play during a game last season. Thompson led the Bulldogs in assists last season with 142. Collegian file photo.

Last year, the Butler men’s basketball team missed the NCAA Tournament for the first time since 2014. Here are ten important numbers going into the 2019-20 season that could play a factor in whether the Bulldogs miss the tournament for a second straight year.

Senior guard Kamar Baldwin’s ranking in scoring in the Big East last season after scoring 17 points per game for the Bulldogs. After being picked as a member of the 2019-20 Preseason All-Big East First Team, Baldwin is poised to have another great scoring campaign.

Points Duke transfer Jordan Tucker averaged after becoming eligible at the end of the fall semester. Even though Tucker struggled somewhat offensively in the first two exhibitions, shooting 25 percent — 3-of-12 — from the field, he should be able to increase his scoring into double digits during his first full season with Butler.

Number of assists junior guard Aaron Thomspon accumulated to lead the Bulldogs in the statistic last season. Thompson should have another solid campaign in his third year running Butler’s offense. He has led the Bulldogs in assists ever since he took over as the starting point guard as a freshman. Expect to see more of the same this season.

Last year’s 3-point percentage of redshirt senior forward Sean McDermott. In his last year of eligibility, the elite perimeter threat should have another efficient season from beyond the arc. McDermott already showed off his scoring ability by putting up 47 points through the first two exhibitions, on an impressive 10-of-16 from downtown.

Number of rebounds transfer Bryce Nze brought down during his last year with Milwaukee. After losing two key big men in Joey Brunk and Nate Fowler, there was a gap that needed to be filled in the frontcourt. Along with his 1.5 blocks per game, Nze’s physicality will be a huge addition, whether he comes off the bench or starts for the Bulldogs.

Field goal percentage of 7-foot, 1-inch transfer Derrik Smits during his last year with Valparaiso. Smits’ ability to finish in the post will be huge for the Bulldogs’ offense. There’s no question his height will be able to help replace Fowler and Brunk on both the offensive and defensive end of the floor. Don’t be surprised to see Smits make a significant impact on the interior offensively as well as alter shots on the opposite side of the court.

Number of stars freshman Khalif Battle had a as a recruit leaving high school. Battle is one of the biggest recruits the program has had in a while and this makes his expectations even higher. The 6-foot, 5-inch combo guard has a nice shooting stroke and some nice bounce. Battle is a huge addition to the depth of the backcourt and he demonstrated his motor while training during the summer.

Happy Bulldog Birthday to one of the new guys. Going to be a fun year with @khalifbattle24 in a Butler uniform. #ButlerWay pic.twitter.com/WaZ5NOpBRD

Baldwin averaged 5.3 points more per game than any other Bulldog on the roster last season. With Paul Jorgensen graduating, the Bulldogs lose their second leading scorer. While Baldwin is an amazing scorer, he simply can’t do it by himself. It’ll be crucial for another Bulldog to help him on offense so he’s not carrying the full load.

Butler’s road record last season. This obviously played a huge factor as to why they missed the NCAA Tournament. If the Bulldogs hope to make another run at the championship, they have to figure out how to win when they aren’t playing at the beloved Hinkle Fieldhouse.

Average number of assists the Bulldogs had last year, which landed them last in the Big East. As a team, being able to move the ball and create offensive opportunities for your teammates is crucial. Through both exhibition games, the Bulldogs registered 37 assists. This shows improvement, but Butler needs to carry this throughout the rest of the season.