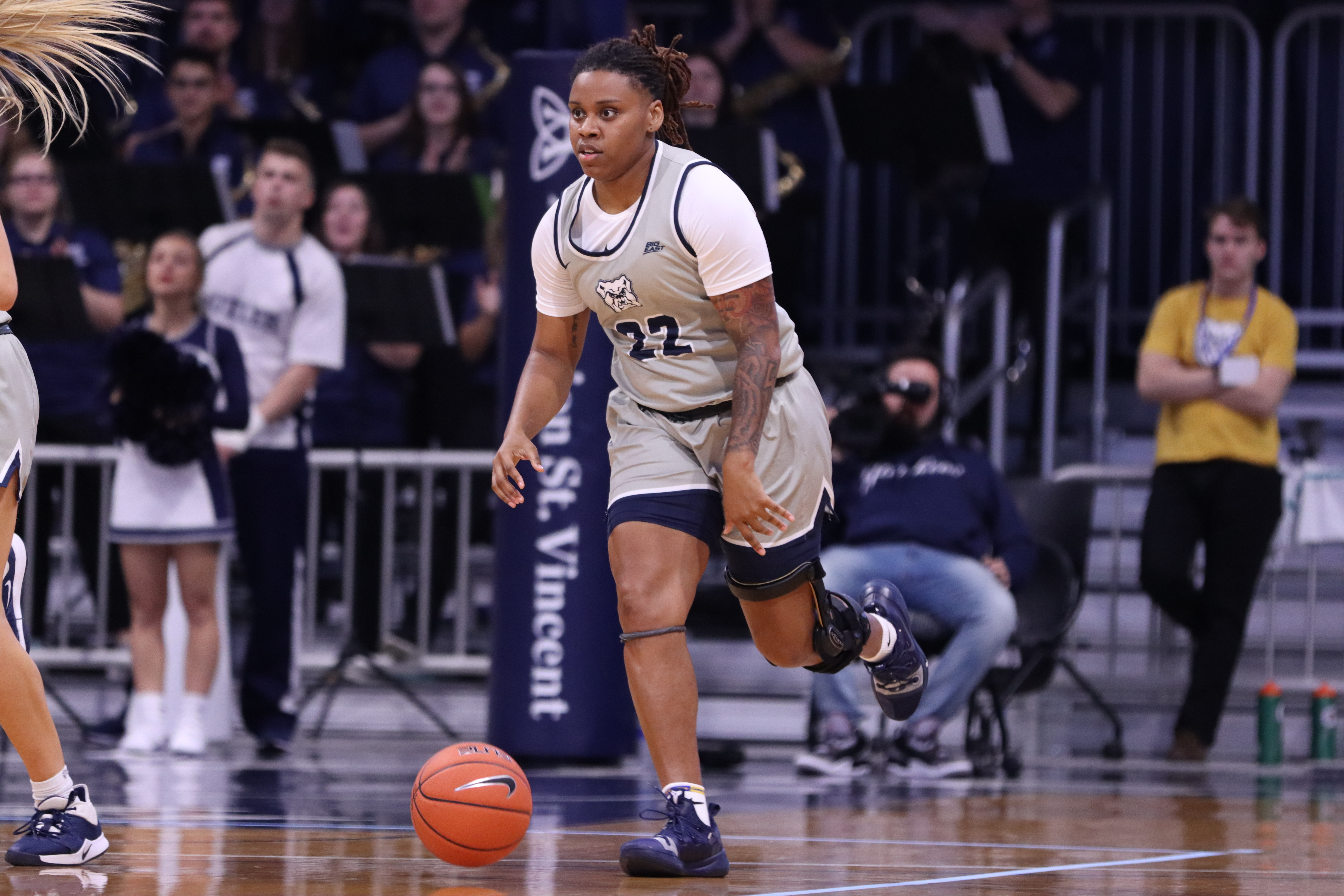 Katherine Strong dribbles the ball up the court against UIndy. Strong returns from an ACL tear that ended her 2018-19 season. Photo by Chandler Hart.

The Butler women’s basketball team will open their season with a home contest against Wagner on Nov. 9. After one of their most successful seasons since the turn of the century, the Bulldogs have a number of storylines heading into the 2019-20 campaign.

1. Will the Bulldogs string together successive winning seasons?

Butler had one of its best seasons since the 1980s last year, as the Bulldogs went 23-10 and earned just their fifth postseason bid since 2000. It was a banner year for a program that had yet to post a winning season under head coach Kurt Godlevske prior to the campaign.

Godlevske won the Big East conference Coach of the Year for his efforts last year in leading the Bulldogs to the Women’s National Invitation Tournament.

But the Bulldogs will have an uphill battle against recent history if they want to carry that momentum into this year. Butler’s last string of winning seasons came when it posted six straight years above .500 from 2005-11.

Aside from that stretch, Butler hasn’t had back-to-back winning seasons since the ‘90s.

2. Can the Bulldogs survive the losses of Schickel, Jennings and Weaver

Butler’s success last season came in large part due to a trio of seniors. Tori Schickel, Whitney Jennings and Michelle Weaver led the way for Butler in 2018-19.

Schickel led Butler in rebounding, Jennings led Butler’s bulk shooters in 3-point percentage and Weaver was Butler’s best defender and had the most steals of any player on the team.

If Butler wants to have a successful season, it has big shoes to fill.

3. Can the Bulldogs topple DePaul from the top of the Big East?

With perennial national powerhouse Connecticut set to rejoin the Big East next season, it’s the last year for a while that a team like Butler can realistically take a swing at a Big East title. But they’ll have to beat a team that has dominated the conference over the last five years.

4. How will the Bulldogs’ new pieces gel?

Amid the graduation of a strong senior class, Butler brings six new faces into the upcoming season. That group includes four transfers who are eligible to play this season.

Parker and Alexander have been with the program since last season but were forced to sit out due to NCAA transfer rules.

For what it’s worth, Dowell and Parker were both featured in the starting lineup of Butler’s 70-46 exhibition win over the University of Indianapolis last week. The rest of the newcomers played various minutes off the bench in the Bulldogs win over the Greyhounds.

5. Can Butler maintain its defensive stronghold?

A key cog in the Bulldogs’ turnaround last season was a heightened emphasis on defense. Godlevske changed the team’s mentality in the offseason prior and the Bulldogs quickly became one of the better defending teams in the Big East.

Butler ranked 41st in the country in opponents’ points per game holding them to 58.5. They held an opponent to under 65 points in 22 games last year.

As stated, the Bulldogs’ best defender from a year ago, Michelle Weaver, is no longer on the roster after averaging 3.24 steals per game. Who steps up to lead their defense remains to be seen.