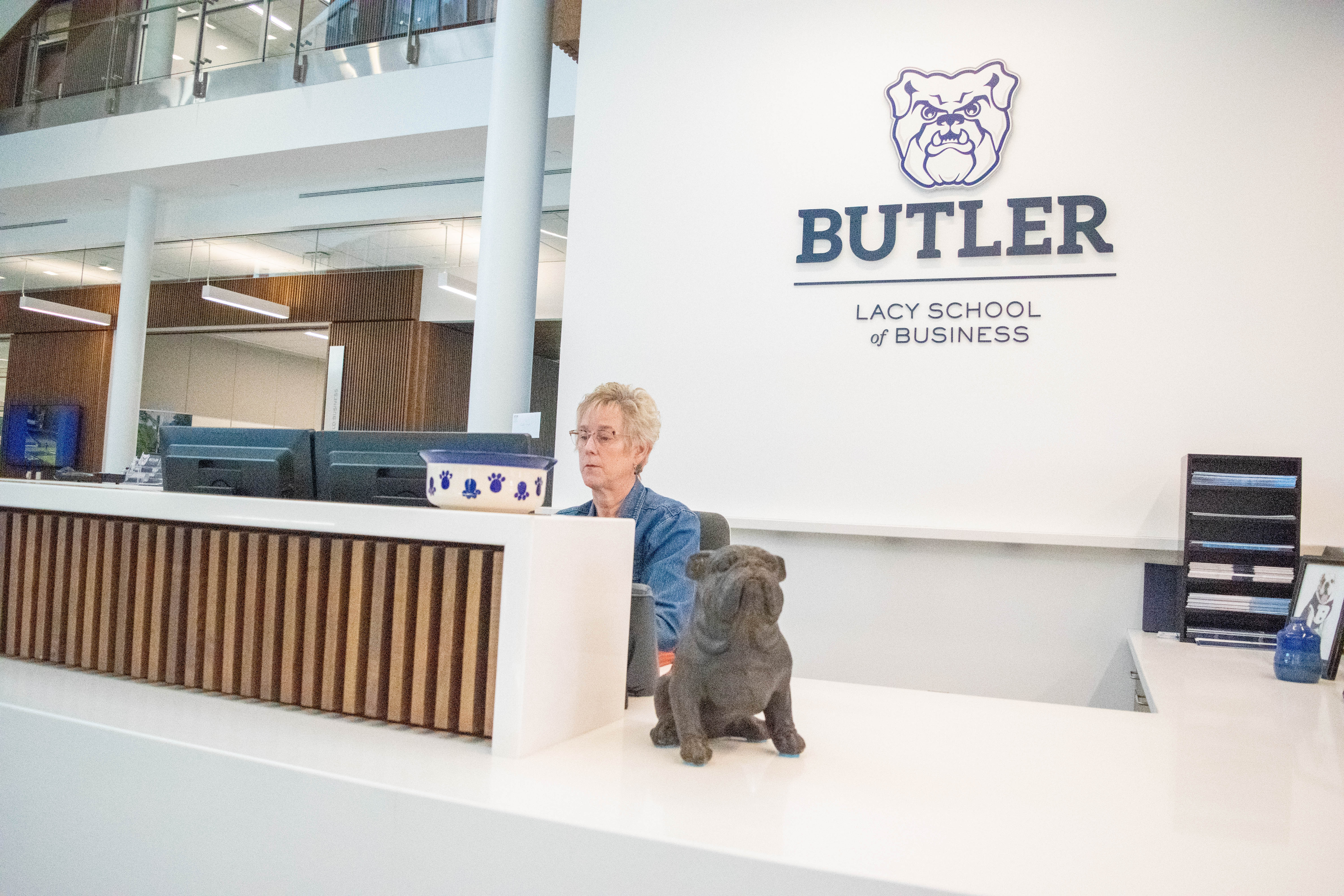 As the Director of First Impressions, Beth Falkenbach is a familiar face to Butler business students and faculty. Photo by Mason Lovett.

Many students and faculty at Butler University are familiar with Beth Falkenbach’s friendly face as one of the first things they see when they enter the new building for the Lacy School of Business. Falkenbach is the administrative specialist for the business school, but many students have given her the title of director of first impressions.

“I think a lot about what [students title me as] when I’m doing my job,” Falkenbach said. “I hold myself accountable for representing the students here and I always want people to think highly of Butler.”

Falkenbach attended Indiana University in Bloomington, with a degree in health physical education and recreation, although Butler was still a prominent place in her adolescent years.

“I grew up in Indianapolis and one of my aunts taught here at Butler, so we would hang out here at the university a lot,” Falkenbach said.

Falkenbach decided she wanted to work at a university as her daughters went off to attend Belmont and Lindenwood University. She thought it would be beneficial if she could get tuition or remission towards her daughters’ schooling. At first, when Falkenbach interviewed at Butler, she was denied multiple times, but then in 2014, the former associate dean of the business school offered her a position.

A big reason why Falkenbach wanted to work at a university was that she considers herself an outgoing person and loves to talk to people. She previously worked at Angie’s List but felt miserable because she found herself isolated behind a computer desk.

“I ultimately wanted to be in a college setting because I thought it would be a good role for me,” Falkenbach said. “I love being around the students and being in an upbeat atmosphere, and even though it’s the same place every day, I’m not always doing the same thing every day.”

Many students enjoy seeing Falkenbach on a daily basis and talking to her in the business building. Jeremy Hernandez, first-year marketing and risk management major, said Falkenback is very friendly and easy to talk to.

“She is a nice lady with a smile always on her face,” Hernandez said. “[Falkenbach] is always energetic and willing to talk to or help anyone.”

Working in a college setting also means that Falkenbach can keep up with her love for college sports. She played basketball in high school and a little bit in college, so college basketball is her absolute favorite thing — but she still follows all the other Butler sports teams.

“I try to attend all the games and it’s fun because you know the kids that you’re cheering for, and that’s what I love the most,” Falkenbach said. “My kids tease me because whenever Indiana University plays Butler, of course, I cheer for Butler because Butler is my family.”

Overall, Falkenbach loves working at Butler and being able to interact heavily with students. She said the new business building positively contributes to that because of how welcoming and open it is to everyone on campus.

“I just want to make a difference in people’s lives,” Falkenbach said. “It’s really fun to be here with students, sometimes acting as a sergeant mom to them or helping them out.”