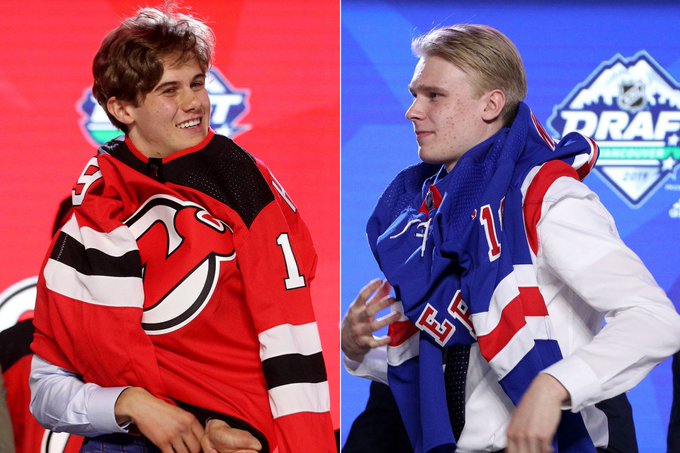 Oct. 2 might be what some call the official start of winter — or it at least points us in that direction. If you finally thought hearing “Gloria” was over, think again. The reigning Stanley Cup winners, the St. Louis Blues, open up the NHL season against the 2018 cup champions, the Washington Capitals. This offseason has been anything but quiet, with new rivalries and high value trades. With the start of the season, here are the top five storylines to look forward to.

The 2019 draft on June 21 had many people questioning if an American could go number one again. The two Americans to be drafted first overall were who other but Chicago Blackhawks star Patrick Kane in 2007, and more recently Auston Mathews of the Toronto Maple Leafs — spelled correctly — in 2016.

This year it came down to American forward Jack Hughes and Finnish forward Kaapo Kakko — who arguably has the best name in the NHL. With the number one pick, the New Jersey Devils chose Hughes, creating a rivalry across the Hudson River with Kakko, who was drafted to the New York Rangers.

While names like Zdeno Chára have set the bar high for taller players, as he is 6 foot 9 inches, there is a plethora of short players, like Boston Bruins’ Brad Marchand, who are just as good. The NHL has a bad habit of limiting players by height.

Be on the lookout for some of your favorite players in different jerseys this year. If you’re a Columbus Blue Jackets fan, then good luck to you because your top three players will not be returning. Now if you were a free agent, is Columbus really the city that makes you say, “Wow, I want to live there”?

Matt Duchene found himself in Nashville, while Artemi Panarin is looking to live it large in the city that never sleeps, alongside Kaapo Kakko. Sergie Bobrasky can finally see the sun again in the warm state of Florida with the Panthers.

P.K. Subban probably had the best summer of his life, finding himself a new fiancé in superstar skier Lindsey Vonn, being showered by gifts like a robe in his new arena in Newark and taking in every aspect of New York. That’s right. Subban is joining first round draft pick Hughes at the Devils alongside veteran Wayne Simmonds and 2018 MVP Taylor Hall. While the Devils might not win the Stanley Cup, New Jersey can finally be competitive again and might surprise some.

What comes as no surprise is the lack of talent up in Canada, except for Toronto, which we all know is really a part of the United States. Winnipeg, who made a decent run in the playoffs, will most likely fall to the bottom of the pack. They have yet to sign their top two players Patrik Laine and Kyle Connor and lost five players due to trades or retirement.

Sure, Edmonton might have arguably the best forward, Connor McDavid, but they lack just about everything else. As for Calgary and Montreal, they both have the potential to make the playoffs at best or sit lower-middle of the pack at worst — with no in between. Oh, and Montreal blew the potential huge signing of Sebastian Aho by letting the public see the terms of his possible contract. The Canes signed him to the same conditions. Whoops.

Poor Ottawa. Everyone and their mother has them sitting last in the NHL and it is hard to debate otherwise. After signing away Erik Karlsonn last year to the Sharks, the Senators have looked like a bad high school team.

The Senators are such a joke in the NHL that even the Simpsons took a shot at them in one of their episodes, saying how no one wants to get traded there. Last season, Ottawa finished dead last with a record of 29-47-6 — and this year shouldn’t be much better.

Crystal ball: predictions for the season

The Arizona Coyotes is a team to look out for, as they were able to sign the Penguins’ big man Phil Kessel. Last year, they were riddled with injuries and some bad luck, but this year they might be able to get over that playoff hump. Another team that is right on that playoff bubble is the Philadelphia Flyers. They finally found success by signing goaltender Carter Hart and veteran center Kevin Hayes.

The last team on that playoff bubble is the Panthers, who are looking to go back to some more old school hockey by signing grinders like Brett Connolly, Noel Acciari and Anton Stralman.

The biggest question of this year is whether or not the Tampa Bay Lighting can get things done. Last year, they were the outright favorite early in the season, and ended up winning the Presidents’ Trophy for the best overall record. They clinched a playoff berth months before anyone else, and practically could have lifted the Cup at the Christmas break. However, they tanked in the postseason. The fact that a young Blue Jackets team swept them in some runaway games is embarrassing. Hopefully, they can get their tail out from under their legs — but I don’t see much coming from them this season.