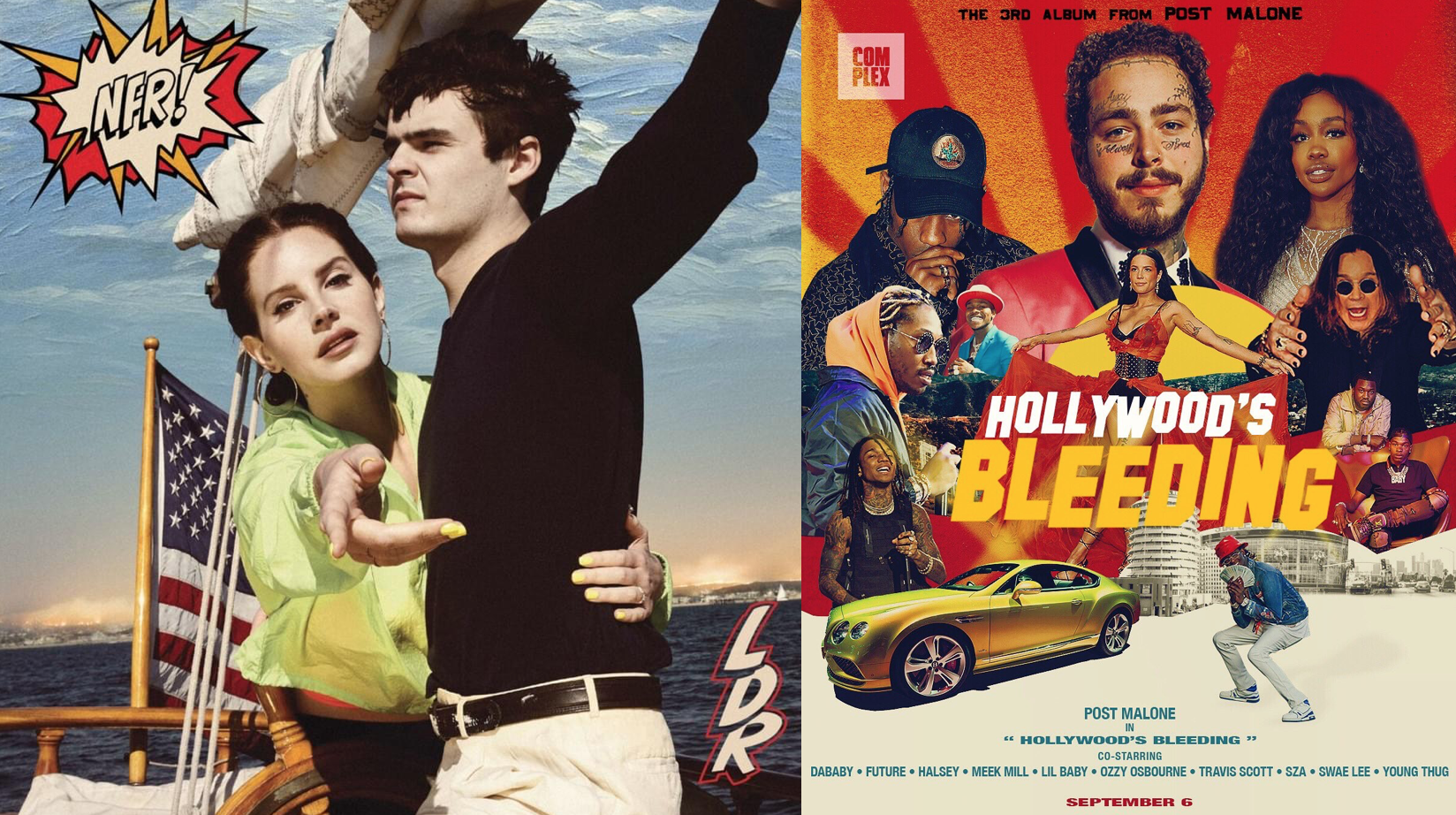 Several long-awaited albums were released in August. Photo courtesy of Genius and Complex.

September has brought many new albums and singles into the circulation of music listened to by Butler students. Specifically, Lana Del Ray’s “Norman F**king Rockwell!” and Post Malone’s “Hollywood’s Bleeding” has answered Butler students’ prayers for new music, satisfying everyone from frat boys to “sad bois.”

“Goddamn, man child…You’re fun and you’re wild, but you don’t know the half of the sh*t that you put me through. Your poetry’s bad and you blame the news. But I can’t change that, and I can’t change your mood.”

The opening lines of Lana Del Ray’s “Norman F**king Rockwell!” do a fantastic job of proclaiming the inherent awfulness that both America and reality can have a tendency to possess. From unattainable goals of excessive wealth to giddy debutante fever dreams of perfection, “NFR” denounces the inauthenticity of American society. Del Ray’s album contains 14 tracks that encompass everything from the denial of the American Dream to the embracing of vulnerability and hope.

This album was released just on time, paralleling the inevitable end of summer and the start of self-reflecting and wallowing autumn. From the nostalgic piano introduction of “Norman F**king Rockwell” to the lyric “fresh out of f**ks forever,” the album is a commanding work that both condemns and sentimentalizes the American Dream. Del Ray’s dreamy and raw vocals are accompanied by archetypal American pop piano melodies that can be best described as something that I’ve heard before.

“NFR” isn’t just an album, it’s a methodical work that’s making a statement. The album’s range of emotions include deluging numbness, reckless infatuation and deadpanning hopelessness. Do these things contradict themselves? Yes. However, the contradictions work. “NFR” is a work of art — the satirical musical accompaniment to a quintessential Norman Rockwell painting to be exact — that encourages its listeners to feel and embrace the pain of life that they are bound to experience.

“This album is more laid back [than] her other albums…Out of all the albums that she’s released, it’s in my top three. It feels more California-esque.” – Matthew Hu, a senior environmental studies major: 8.3 / 10

“The lyrics in this album are a lot more real than lyrics by her that I’ve heard in the past, [which were] really tied to that west-coast cool aesthetic that she had maintained for a while…I like it better than her other albums…I haven’t heard pop music that was this real — ever.” – Annie Brown, a junior jazz studies major: 15 / 10

“I think that this has been her most cohesive piece of work yet and I enjoy the rawness of the production of the album… ‘NFR’ shows Lana critically evaluating herself growing.” – Dave Thompson, a junior business marketing and strategic communications double major: 11 / 10

“Hollywood’s bleeding but we call it home.”

Post Malone’s long awaited album “Hollywood’s Bleeding” promises his sad-but-too-drunk-to-care aesthetic and introduces new nuances to his respected style in the hip-hop field. Acknowledging his demons, Malone shows through his album that he undoubtedly has layers. From his nonchalant and lighthearted demeanor to the occasional heartbroken vulnerability, “Hollywood Bleeding” gives Posty complexity. “Hollywood’s Bleeding” is deeper than his past works and shows not only his maturity as an artist, but his ability to mix genres, generations, and to be frank, vibes.

Malone’s latest album juxtaposes profound lyrics with undeniably clean beats. With lyrics like “it seems like dying young is an honor,” Malone elucidates on the toxicity of Hollywood and the expectations that accompany fame. However, Malone’s ever-present beats that underlie “Hollywood Bleeding” are conflicting to me. While the beats seem to determine bangers from songs and paint a picture of “everything’s okay,” the lyrics say anything but. Perhaps this was intentional, paralleling Hollywood’s tendency to overlook mental illness and addiction and expect only the best from its artists, or maybe this is just Malone’s trademark. Or maybe it’s just what sells. Either way, when you find yourself at a basement in some dude’s senior house or in the car on the way to Olive Garden with your friends, listen for Malone’s “Hollywood’s Burning” and all of the songs, collaborations and issues the work confronts.

“There aren’t as many bangers on this album…it seems like Post Malone has gone into a more mature artist direction.” – Conner Maloney, a sophomore political science and psychology double major: 7.5 / 10

“I really like Post Malone’s earlier works because I think they were more authentic. Now they have more of a pop slash hip-hop feel which is fine, I just don’t vibe with it as much.” – Briana Sanchez, a junior marketing and economics double major: 6 / 10

“I think it’s a little slow, in comparison to his other albums. It’s not my favorite. I think a lot of the tracks sound similar to each other, [but] they’re still good.” – Keith Money, a sophomore exploratory business major: 7 / 10