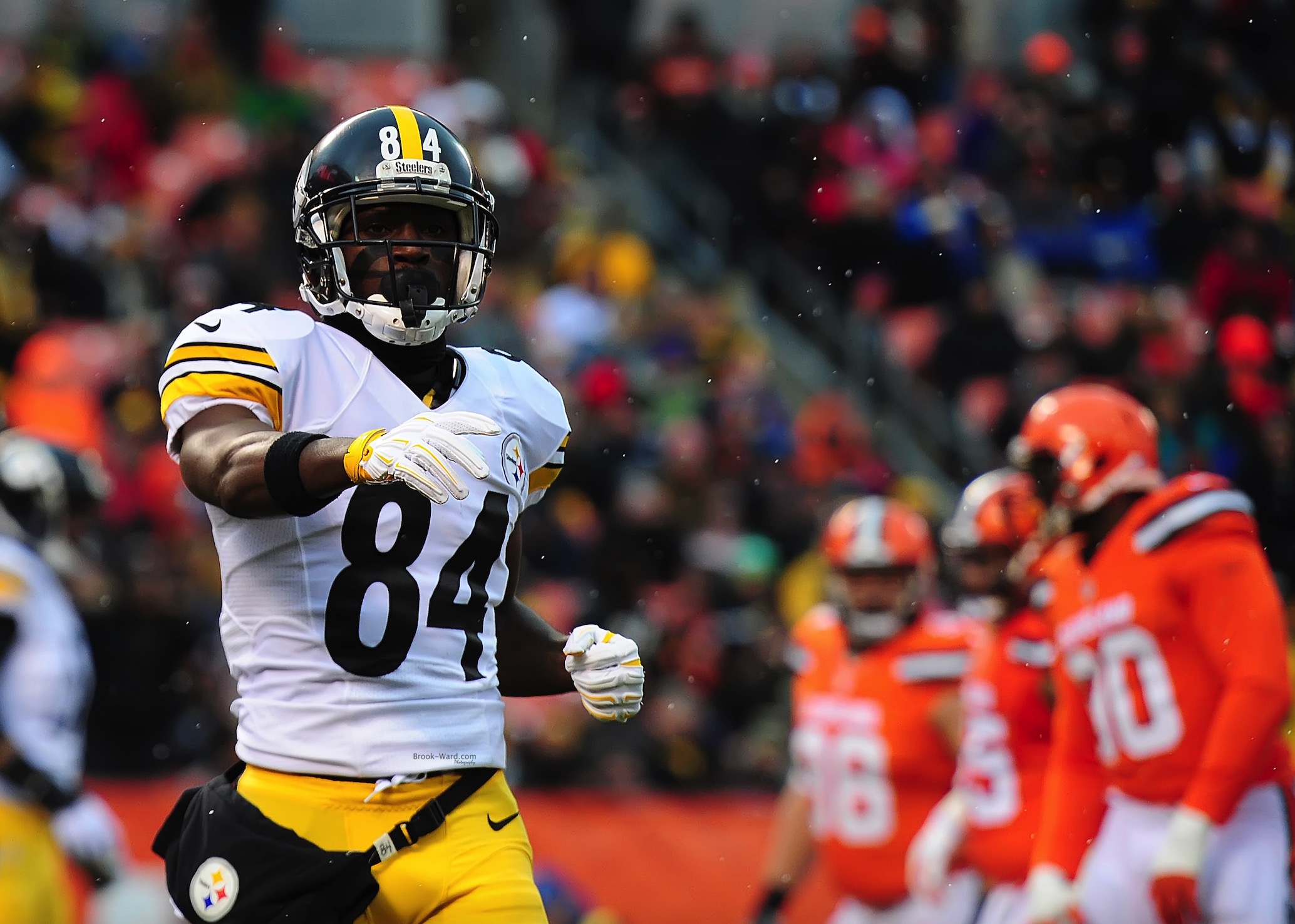 Antonio Brown joined the New England Patriots after being released by the Oakland Raiders following several incidents during the offseason. Photo courtesy of Brook Ward/Creative Commons.

Antonio Brown’s situation is very peculiar to say the least.

It was obvious that he had some issues after the disaster during his last couple years in Pittsburgh. We all know he’s one of the best wide receivers, if not the best, of the last decade. A seven time pro-bowler, Brown has seven seasons with over 1,000 yards receiving and is a four-time first team All-Pro.

I could list his accolades all day long. Brown had the chance to start over after ending the toxic relationship with Big Ben and the Steelers.

“I’m here to elevate everything around me,” Brown said in his introductory Raiders press conference. “I’m here to just be a surge of energy, of positivity and good force. A great teammate and to bring out the best of everyone around me cause we all know it’s not just about me.”

Man, did that age well.

During his extremely brief time in Oakland, Brown somehow managed to do the exact opposite of everything he said in that quote. It all started with the little tantrum over his beloved helmet. He wanted to wear the helmet he wore his whole career, which I completely understand, but the rules are the rules. If you are required to wear a specific helmet, just wear it.

Instead of just complying, Brown threatened to retire if he was not allowed to wear the helmet he wanted. He applied for a grievance to get his helmet, and lost, of course. He would eventually agree to wear an NFL approved helmet on Sept. 4.

All of this was because of a piece of equipment. Instead of putting his attention towards his craft and practicing, he was worried about his helmet.

Brown is more than a football player, but he needs to learn to pick his battles. Obviously, this is one where he didn’t even have a chance. You simply can’t throw a tantrum as a 31-year-old man every time you don’t get your way.

Next was the frostbite on his feet due to not wearing the proper footwear during cryotherapy. He posted a picture on his Instagram story of him smiling, showing the not-so-pleasant injury to his feet.

There’s no way that he was able to go to cryotherapy without knowing how to properly do it. And if he didn’t, you’re telling me none of his trainers or the cryotherapy specialists that were working there didn’t know the right protocol? That’s really hard for me to believe.

At this point, I began to question whether he wanted to be on the Raiders. Brown received a letter from Raiders general manager Mike Mayock that he would be fined for missing a practice and a walkthrough. The fines totaled over $50,000. Brown took his frustrations and discontent to Instagram.

Antonio Brown posts his displeasure with fines from #Raiders pic.twitter.com/0OMhdwFu7K

Brown met with Mayock the next day and got into a heated argument. That led to Brown allegedly calling Mayock a “cracker” and threatening to punch him. He made an emotional apology, and it seemed as though all things were forgiven. Raiders head coach Jon Gruden even said that Brown was expected to start in their first game against the Broncos.

This is just a disgrace. Brown seriously resulted to using a derogatory slur and threatening the general manager of his team because of what he decided to do. A responsible person takes accountability for his actions.

But because of Gruden’s eagerness to win, he believed Brown’s little act. A part of me still had hope for Brown, but the other part of me knew his time with the Raiders was coming to a close sooner rather than later.

On Sept. 6, Brown released a video of a conversation between himself and Gruden. The video expresses that Brown is misunderstood and that Gruden wants him to “just play football.” Gruden brushed off the video by later saying that he thought it was “awesome.”

Finally, the Raiders fined Brown $219,000 for his confrontation with Mayock and subsequently voided the $29 million that was guaranteed based on his contract. Brown then asked for a release and the Raiders granted his request not long after.

The New England Patriots signed him just hours after being released from Oakland. Brown finished his first game with the Patriots on Sept. 15 with 56 yards and a touchdown.

This whole situation has been the epitome of what it means to be selfish and immature. It was confusing and ultimately frustrating as a fan to see what Brown put the Raiders through over the short six months that he was part of the organization.

Instead of complaining about everything and having such a selfish outlook on things, Brown should have the mindset of doing things for the team and the organization.

There will always be times where you need to put yourself before others. But football is a team sport. You simply can’t be selfish when it comes to being on a football team.

In addition to his football related issues, Brown was accused last week by his former trainer, Britney Taylor, of rape on three separate occasions.

On Monday, another woman came forward stating that Brown committed sexual misconduct while she was painting a portrait of him in 2017, according to a Sports Illustrated exclusive.

Brown denies involvement in both accusations. Regardless of whether these accusations are false or not, I hope the truth will surface.

His future in New England is dependent on whether he is charged of these allegations, and if he is, I’d be surprised if he ever played on an NFL field again.