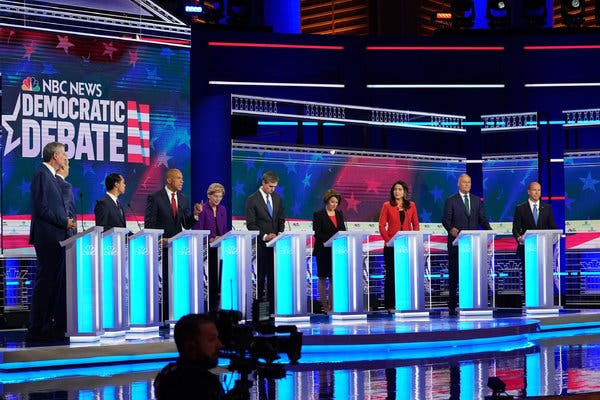 The third Democractic presidential primary debate will be held at Texas Southern University in Houston on Sept. 12. The event will be aired from 8 to 11 p.m. on ABC.

The Butler chapter of College Democrats will be hosting a watch party for students to attend in Jordan Hall 141 at 7:45 p.m. Lydia Ochs, a senior political science major and the organization’s president, is excited about the inclusivity of this year’s candidate pool.

“This is the most diverse field of candidates coming from all backgrounds,” Ochs said. “It’s definitely overwhelming, but I’m happy to watch so many different perspectives. It definitely makes it a lot more interesting.”

Vox reported the second debate contained some surprises while also maintaining expectations. On the whole, reporter Matthew Yglesias said Booker had the strongest night, performing better than expected, while Biden continued to stick to his centrist talking points.

Ochs believes that by having more primary candidates, students and voters will be more prepared when it is time to vote.

“Young people’s issues are at the forefront of a lot of these candidates’ platforms,” Ochs said. “We have an opportunity to make an informed decision because we have so many options.”

There will also be events in Broad Ripple for students who wish to get involved off-campus. The Marion County Democratic Party will be hosting a public watch party at Moe and Johnny’s.

Cheryl Laux is the senior advisor to chairwoman Kate Sweeney-Bell of the MCDP. Laux believes that people tuning into the debate — that America as a whole —  is “anxious and ready for change.”

“I think [the desire for change] has so much to do with the frustration of what’s happening in Washington,” Laux said.

She encourages those who may not be registered to vote or overwhelmed by election season to remain positive and hopeful.

“I love President Barack Obama, and he always has a message of hope regardless of what is happening whenever he speaks,” Laux said. “Your vote can be the difference in your county, district, or anywhere. So we can’t give up.”

The Democratic debate will be live on ABC News. For those without access to Cable T.V., the debate will be available on Hulu Live, the Roku Channel, Facebook, Twitter, Apple T.V., Amazon Fire T.V., YouTube and Apple News.