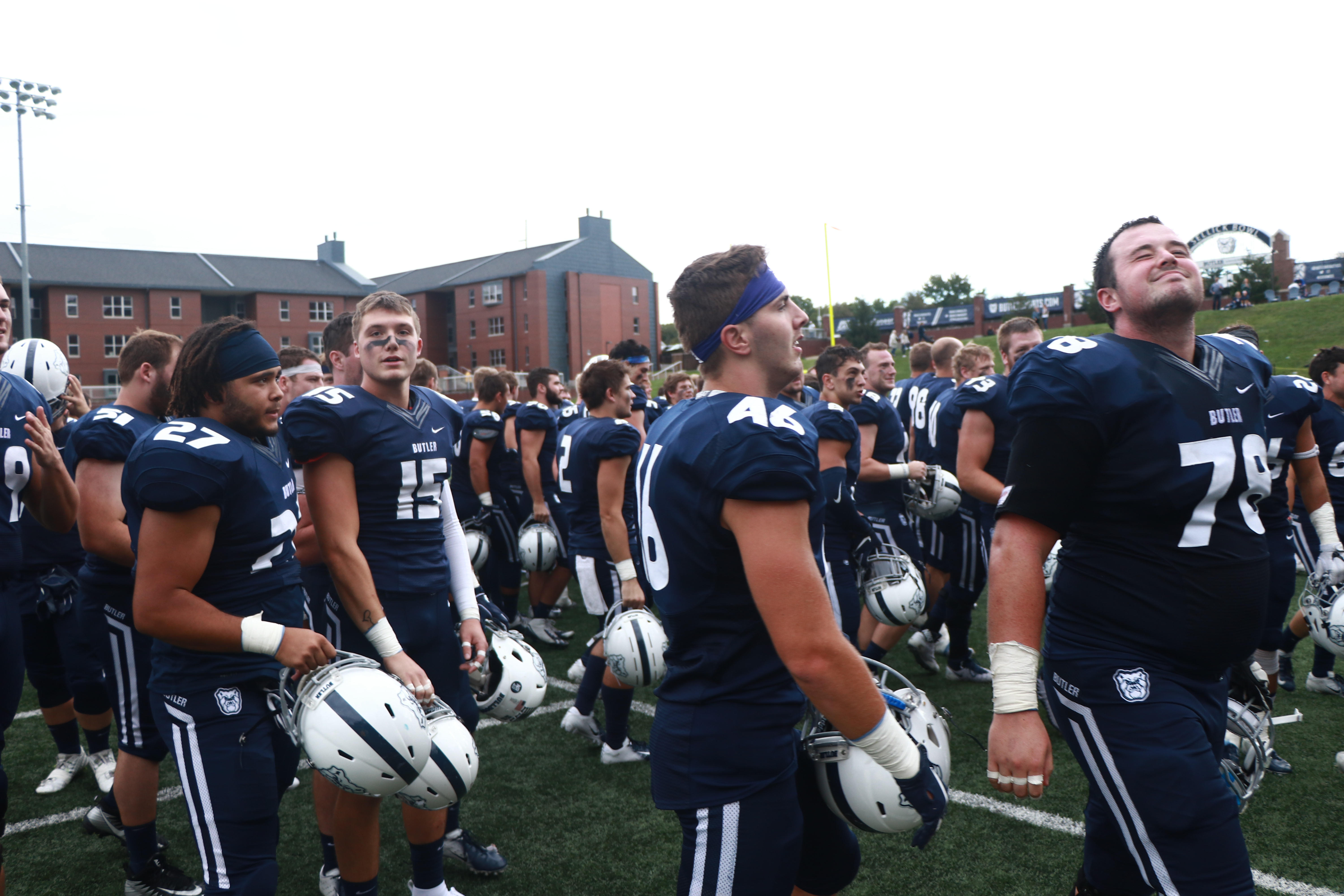 Butler football after a game at the Sellick Bowl. The Bulldogs knocked off No. 24 Youngstown State in their season opener. Jimmy Lafakis/Collegian file photo.

The 2018-19 Butler athletics season featured everything from incredible upsets and historic victories to record-setting performances. The Butler Collegian sports section voted on our top 10 sports moments from this school year.

The football team pulled off one of the biggest upsets in college football history, knocking off nationally-ranked Youngstown State, 23-21, on Sept. 1. Youngstown State held a 63-0 edge in scholarships. With 10 seconds remaining in the third quarter, the Penguins led 21-7. Two touchdown passes by quarterback Will Marty brought the Bulldogs within a point with 1:20 to go. Wide receiver Pace Temple recovered Drew Bevelhimer’s onside kick after the second touchdown, giving Butler another possession. The Bulldogs drove 26 yards in six plays to set up Bevelhimer’s 44-yard field goal with four seconds left. Marty finished with 253 passing yards, 167 of which went to Temple. Sports Illustrated even wrote a story chronicling the upset.

When the scoreboard reads 00:00… pic.twitter.com/DfTJqTPmSH

Always sounds a little better on the road… pic.twitter.com/ufQiKt2RfN

2. Women’s basketball takes down No. 11 Marquette on the road

After falling to the Golden Eagles 87-58 at Hinkle Fieldhouse in the team’s first meeting of the season, the women’s basketball team picked up a program-defining 61-57 win when the teams met in Milwaukee on Feb. 22. The Bulldogs outscored Marquette 18-8 in the fourth quarter, overturning a six-point deficit. Butler scored the final four points of the game on a Tori Schickel jumper and two free throws from Whitney Jennings. Schickel and Jennings were two of four Bulldogs with at least 10 points in the game.

In a Feb. 3 loss at Seton Hall, women’s basketball’s Tori Schickel grabbed 10 rebounds, becoming the program’s all-time leading rebounder in the process. She ended the game with 1,052 career rebounds, passing Elza Purvlicis for the most in the history of Butler basketball, men’s or women’s. Schickel averaged nine rebounds per game as a senior and finished her career with 1,154 rebounds. At the team’s next home game against Xavier on Feb. 8, Schickel was recognized in a pregame ceremony.

With seven regular season games remaining, @Tori_Schickel has moved into the top spot on the career rebounding list. #ToriTracker pic.twitter.com/lXJDUvUZRp

In its third game of the season, the women’s soccer team posted a convincing 4-1 win at the Sellick Bowl over No. 20 Notre Dame on Aug. 26. Paige Monaghan gave the Bulldogs a 1-0 lead only 93 seconds into the contest. Goals by Morgan Kloosterman and Katie Soderstrom in the 58th and 62nd minutes, respectively, put Butler up 3-0. After Olivia Wingate got the Fighting Irish on the board, Monaghan secured the win with a second goal in the 89th minute. Following the victory, the Bulldogs jumped into the United Soccer Coaches Poll for the first time this season.

Bulldogs with a huge victory today over #20 Notre Dame. Here are the highlights. pic.twitter.com/oFHPQZwsCh

Following a four-year Butler career that included two All-Big East First Team selections, a Big East Offensive Player of the Year award, 22 goals and 18 assists, former women’s soccer standout Paige Monaghan entered the 2019 NWSL Draft. She was selected by Sky Blue FC, located in her home state of New Jersey, with the first pick in the second round. Monaghan became the first player in program history drafted in the NWSL Draft.

In its third season as a Division I program, the women’s lacrosse team recorded its first victory at home, a 13-10 win over Kent State on Feb. 22. Trailing 9-8 early in the second half, the Bulldogs scored five of the final six goals. Sydney Pattison, Haley Hallenbeck and Ashley Guerra all recorded hat tricks in the win. A week later, Butler picked up another home win, this one against St. Bonaventure. The Bulldogs opened up an 8-3 lead and held on for a 10-8 victory behind four goals from Karina Latsko.

First win of the season for Butler is a 13-10 victory over Kent State!! #GoDawgs pic.twitter.com/GBUdMtAdKT

The women’s basketball team sent its four seniors — Tori Schickel, Whitney Jennings, Michelle Weaver and Taylor Buford — out in style with a 62-60 overtime win at home against Villanova in its regular season finale on March 3. Butler held a three-point advantage with 1:28 left but allowed the Wildcats to level the score when Kelly Jekot split a pair of free throws with 14 seconds remaining. In overtime, Weaver’s bucket at the 2:20 mark was the difference as neither team scored the rest of the way. Kristen Spolyar posted a game-high 22 points for the Bulldogs. The victory gave Butler 11 Big East wins, the most since moving to the conference prior to the 2013-14 season.

It took five extra minutes, but the Bulldogs earned a key victory over Villanova on senior day.

The win helped the Dawgs clinch the third overall seed in the BIG EAST tournament next week.

Plays of the game ⬇⬇ pic.twitter.com/LGdWbY1eG8

The softball team recorded 15 hits in its 6-5 extra-inning win over La Salle on March 17. Freshman Lauren Fey accounted for five of those 15 hits. The performance tied the program record for hits in a single game. Fey was a perfect 5-for-5, including a two-run triple to give the Bulldogs a 3-2 lead in the second inning. She also reached home plate twice herself. Prior to Fey, Jenny Jacobs was the only other player to collect five hits in a game, back on Feb. 29, 2008.

Congrats to our @lofey3 for tying the school record for hits in a game with 5! @BIGEAST @BigEastSftball

Over a three-game stretch from April 6 to April 12, baseball’s Harrison Freed hit four home runs and collected 16 RBI. Freed homered twice in Butler’s 11-7 win over St. John’s on the 6th, a grand slam in the second inning and a three-run shot in the sixth. In the team’s next game — a loss at Ball State — he hit another grand slam, this time in the seventh inning. The tear concluded with the fourth home run in the series opener against Creighton, a two-run shot that tied the game in the bottom of the ninth.

Wide receiver Pace Temple caught 85 passes for 1,097 yards as a senior, breaking the Butler career and single-season receiving yards records, as well as setting a new mark for receptions in a season. Temple is the only wideout in Butler history to record back-to-back 1,000-yard seasons and was a two-time All-Pioneer League First Team member. He is also one of seven Pioneer League receivers to reach 3,000 receiving yards. In the 48-44 loss at Jacksonville on Nov. 3, Temple broke the career receiving yards record with a 12-catch, 196-yard performance.

With 98 yards in the first quarter today, Pace Temple takes over as the all-time leader in career receiving yards at Butler. He's at 3,025 yards (and counting) pic.twitter.com/NGgOrtlD1R