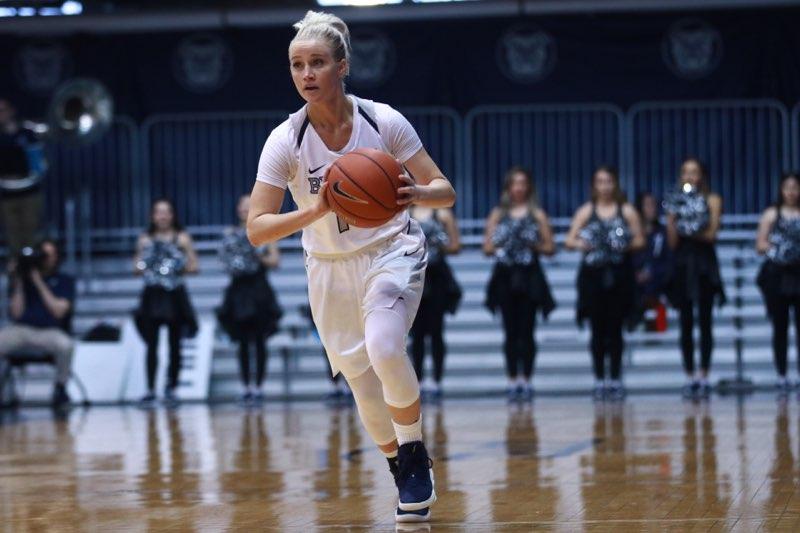 Whitney Jennings looks to make a pass against Villanova. Jennings scored 17 points in her final game at Hinkle Fieldhouse. Photo by Jimmy Lafakis.

The Butler women’s basketball team increased its NCAA Tournament chances with a 62-60 overtime win against Villanova on March 3. After two games where they lost by 14 and 30 to DePaul and Georgetown, respectively, the Bulldogs pulled this one out. Butler is officially locked in as the No. 3 in the Big East Tournament starting next week at Wintrust Arena.

The Wildcats started off hot, leading the first quarter 14-8 with a little less than two minutes remaining. Tori Schickel scored a layup, followed by a 3-pointer by Whitney Jennings, to close the deficit to 14-13 by the end of the first quarter.

The second quarter started off with three consecutive lead changes and it was all knotted up at 19 midway through the quarter. Spolyar knocked in a three, answered by a Jannah Tucker trey on the very next possession. Villanova knocked in two straight triples followed by a Naira Caceres layup on the other end to close the half. Butler would go into halftime down 28-24.

On the first possession of the second half, Kelly Jekot, who recorded five threes, hit one from deep. Jennings would tie the game with a jumper and a three before DePaul went on a 7-0 run.  Spolyar would answer with her an 8-0 run of her own.

The fourth quarter saw five lead changes before the game was tied up at 58 apiece headed into overtime. Michelle Weaver ultimately hit the game-sealing bucket with 2:20 to go, with DePaul going 0-3 on three-point attempts in overtime.

Butler ends the regular season 21-8 overall — the program’s most regular season wins since the 2009-10 season  — and 11-7 in Big East play, third in the conference standings. The Bulldogs will face Creighton in the quarterfinals of the Big East Tournament on March 10.