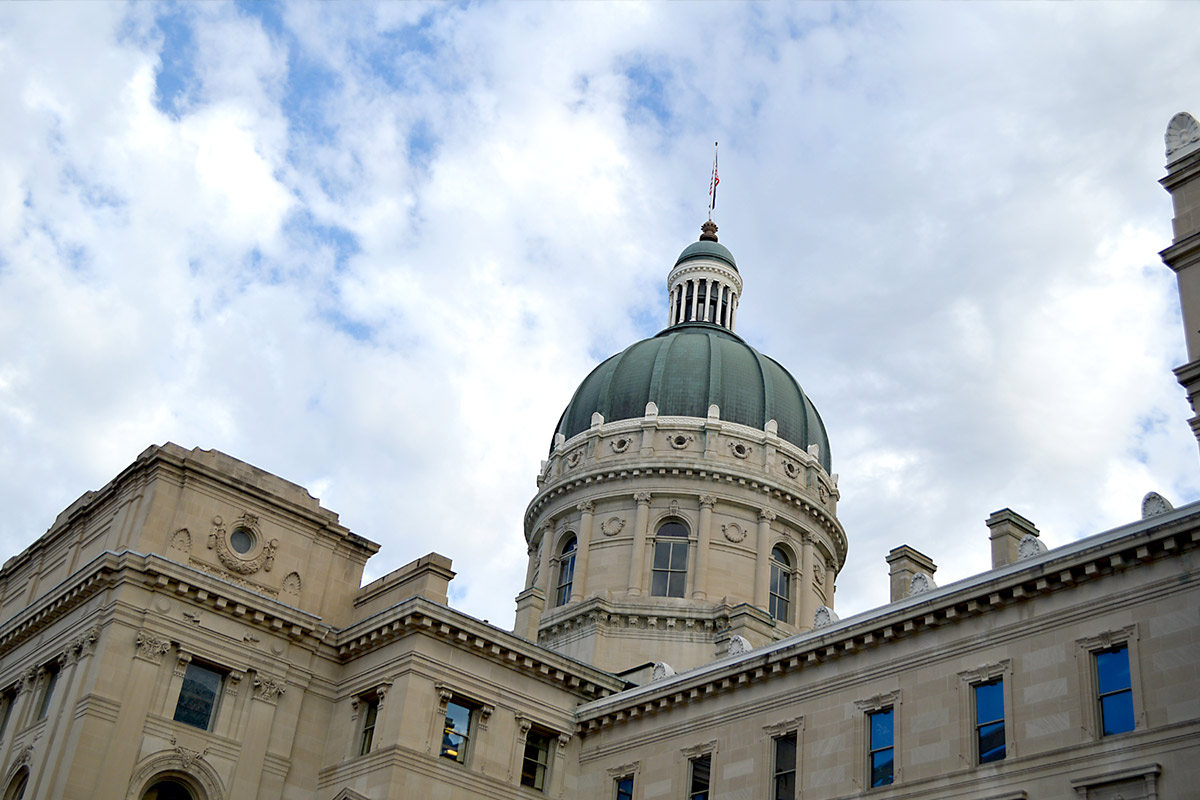 Sharley Bell, a resident of the Butler-Tarkington neighborhood, had no idea what could possibly be on her garage.

That’s what her neighbor said when Bell answered the door. Has she seen what’s on her garage?

“I was thinking it was a bird or something,” Bell said, recalling the moment.

She did not expect to see the n-word spray-painted in blue on her garage.

“I guess people are people, but to do something so senseless?” Bell said. “It hurt a lot of people. Not just only me, my mama, but people in the neighborhood as a whole.”

The house on West 44th Street is Bell’s childhood home — her family has lived in the same house for over 50 years. This is the first time something like this has happened.

The Butler University Police Department classified the incident as criminal mischief, vandalism and a hate crime in their crime log.

A hate crime, or bias crime as stated in current Indiana legislation, is defined in IC 10-13-3-1 as an offense in which the individual commits it “knowingly or intentionally… because of the color, creed, disability, national origin, race, religion or sexual orientation” of the victim.

On April 3, Gov. Eric Holcomb signed Senate Bill 198, which has an amendment that allows a court to consider enhancing the consequences if the person committed the offense with “bias due to the victim’s or the group’s real or perceived characteristic, trait, belief, practice, association or other attribute the court chooses to consider, including but not limited to an attribute described in IC 10-13-3-1.”

It will take effect July 1.

Julia Bartusek, a senior peace and conflict studies major, has followed the movement to pass a hate crime law due to her legislative internship at a public affairs firm and interest in policy.

Bartusek was taking notes on the session when Rep. Greg Steuerwald, R-Avon, proposed the amendment to Senate Bill 198, attaching the hate crime language. The bill was originally about sentencing and had garnered little attention before the attached amendment.

Bartusek said it was so random because the amendment had nothing to do with the bill.

Three days after Steuerwald’s amendment, Rep. Carey Hamilton, D-Indianapolis, attempted to add an amendment to Senate Bill 373 with similar hate crime language. Except instead of considering bias toward characteristic, trait, belief, practice, association or other attribute, she added bias toward age, ancestry, gender identity and sex.

Currently, there is no Indiana law that specifically lists age, ancestry, gender identity and sex in hate crime provisions.

The amendment was dropped, as it was ruled to be irrelevant to the bill which was about academic credits for religious institutions.

Holcomb said the language in Senate Bill 198 is broad enough to offer protection to all groups.

“I think it’s interesting because it’s such a game,” Bartusek said. “Republicans have supermajority… anything that a Democrat proposes is super hard to get through. Period.”

Bartusek said she “believes in pretty progressive things” like having a full comprehensive list to make a hate crime law, but if it has to take a couple of steps to get there, that’s what happens.

“I love politics, and I always have, and I think that this really opened up my eyes to how much strategic planning it takes,” Bartusek said. “It was just so frustrating because I just wanted to know why they wouldn’t do it, but no one’s ever gonna say like, ‘I hate gay people’ or something like that. It’s very weird — people like to disguise their biases.”

Bartusek is from Minnesota, a state that has hate crime legislation, but she said she still cares about what laws Indiana passes or doesn’t. Hate crimes happen in Indiana, she said. It happens on campus.

In the first week of March, the words “white power” were written on a whiteboard in the Atherton Union student lounge near the Efroymson Diversity Center.

On March 20, a homophobic slur was spray painted on the sidewalk in front of Delta Tau Delta, a fraternity house on Hampton Drive.

Whether those two incidents could be considered hate crimes under current Indiana law, though, depends on several factors. The incident in front of Delta Tau Delta is in BUPD crime log as criminal mischief and vandalism. The incident in Atherton is not in the crime log.

Diane Sweeney, BUPD assistant chief of administration, said in an email to The Collegian that the “white power” incident was not classified as a hate crime because there was no crime to go with the words under federal guidelines dealing with hate crimes. It was documented, though, in case a similar event occurs or the person who wrote the words is identified.

“One of the things with that particular incident, is when you have a vandalism, you need to have damage, defacing… in order for it to be a crime,” Sweeney said. “There’s some mixed opinions as to if you write something on a whiteboard, and you can erase it, is that in fact vandalism? We’ll take it seriously. Even even if people say no.”

As a university, Butler must follow the Clery Act, a federal “law that aims to provide transparency around campus crime policy and statistics.”

Sweeney often talks with Marion County prosecutors to determine how to identify an incident and if there is case law to support it. There was a case at a different university in which a prosecutor said writing something hateful in chalk is a hate crime because it would cost the university money to clean off the chalk.

“Even though Indiana has been slow to respond to [hate crimes], universities are always looking at evaluating things because of the Clery Act,” Sweeney said in an email.

In regards to the homophobic slur spray painted, Sweeney said it is hard to identify it as a hate crime without knowing who did it and their frame of mind, which is why they encourage people to come forward with any information.

Depending upon who did it can change the whole picture, Sweeney said, because they could then update the crime log.

Bartusek said hate crimes often targets those who identify as LGBTQ+, and it is the LGBTQ+ community that has been “sidelined” in Indiana law.

“I see policy as the skeleton that holds up society and without a bone for reference, or without something to defend a decision, it’s pretty loose,” Bartusek said. “And I think that those people deserve to be protected under their laws.”

After Bell’s garage was vandalized, the Butler-Tarkington Neighborhood Association passed a resolution on April 3 denouncing the racist vandalism, having zero tolerance for such acts of racism and calling for the Indiana General Assembly to pass the strongest possible version of Senate Bill 198.

“I knew that as a neighborhood association, we needed to make sure that our neighbor felt safe and felt welcome in the community,” Clark Kirkman, president of the Butler-Tarkington Neighborhood Association said. “That’s why we decided to reach out as soon as we can.”

The association was founded in the 1950s with civil rights in mind, which is why, Kirkman said, it was appropriate to take a stance on hate crime law.

Even if a stronger version of the bill wasn’t passed, Kirkman said the fight is not over.

“For a local community, all you can do is decide to redouble your efforts,” Kirkman said. “And that’s what we intend to do. We’re by no means stopping with the passage of this resolution.”

Bell said she wanted people to know what happened to her home so they are aware.

“You don’t know until it happens to you, how you feel,” Bell said. “If it doesn’t happen to you, you don’t know. It needs to be addressed that people hate people. A senseless heart to do a senseless crime.”