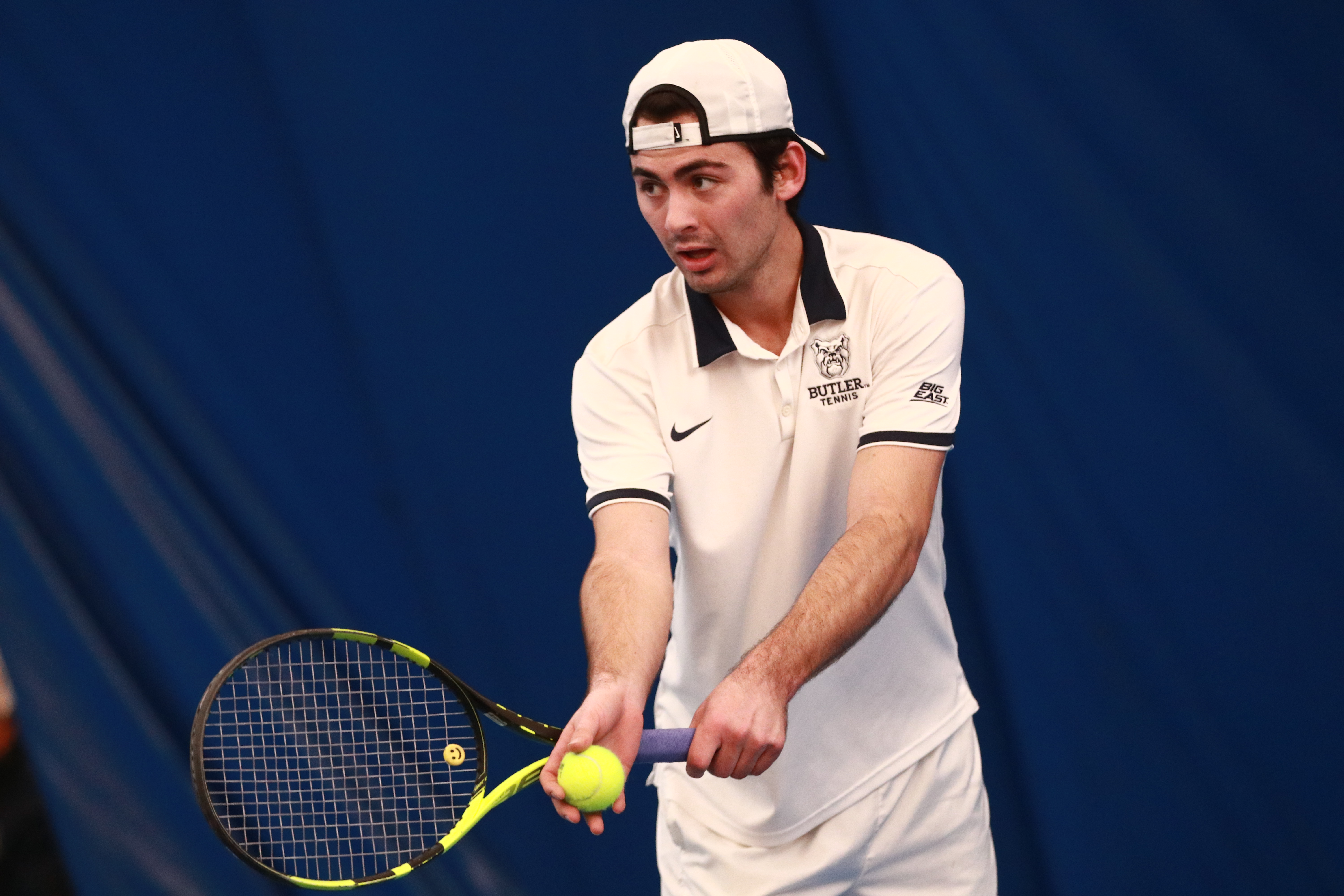 Mason Dragos gets ready to serve. Dragos and the men’s team fell to Marquette in the semifinals of the Big East Tournament. Jimmy Lafakis/Collegian file photo.

The Butler men’s and women’s tennis teams took the trip to Cayce, South Carolina, April 18-21 to take part in the Big East Tournament. However, neither team would make it to the championship round, ending their seasons.

The men went into the tournament as the No. 2 seed, beginning the tournament with a quarterfinal matchup against No. 7 seed Villanova. The Bulldogs claimed the doubles point, which they hadn’t done in the regular season matchup with the Wildcats. Adrian Mag and Michael Dickson won on the second court, 6-3, followed by a win by Spencer Lang and Thomas Brennan on court three, 7-5.

The Bulldogs would take on No. 3 seeded Marquette in the semifinals, after the Golden Eagles defeated Georgetown 5-1 in the opening round. The match was expected to be close, as the meeting between the two teams just over a week ago finished in a 4-3 Bulldogs victory.

Butler grabbed the doubles point before rain entered the area, suspending play until the match could be resumed April 21. The 1-0 lead was quickly lost as the Golden Eagles grabbed straight-set victories in singles play on courts three and six, making it 2-1.

With the match knotted at 3, the final battle came down to Brennan in the No. 2 spot. He won the first set 6-4, but would lose the second 1-6. In the final set, he battled with Luke Smrek for the final point, but came up short 5-7, and the Golden Eagles moved on to the Big East championship with a 4-3 win.

The Bulldogs finish the season with a 21-7 record in head coach Daniel Pollock’s first season at Butler, a program record. The graduating senior class leaves as one of the most decorated in Butler’s tennis history, having won the 2017 Big East Tournament title.

For the women, their rematch with No. 8 Georgetown from last year’s opening round had the same result, as the No. 9 seeded Bulldogs were eliminated. They finish the season with a 11-14 overall record. The match did not fare well for Butler as the Bulldogs were shut out 4-0. The closest matchup of the day was between Caroline McAuley and Anna Short. McAuley won the first set 6-4, but lost the second 3-6. The third set was not completed.