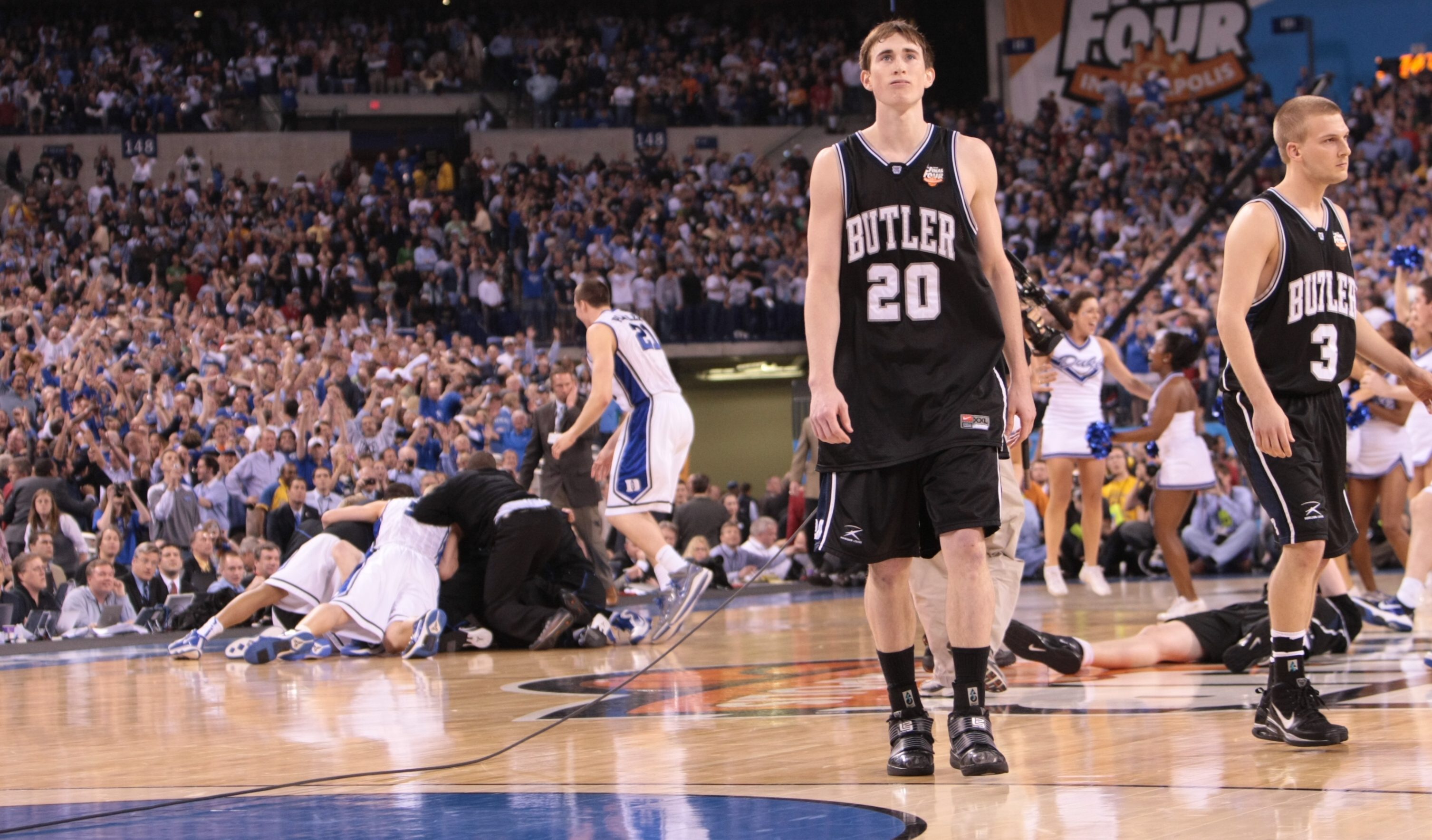 Every March, there’s a new team that catches the eyes and hearts of all college basketball fans, just as Virginia did this season. In 2010, that team was Butler, who made its national statement just 10 miles from its campus, reaching the championship game. Nine years later, people who were at those games and on those teams tell the story from their perspectives.

With its win over Wright State in the Horizon League Championship, Butler entered the NCAA Tournament having won a nation-leading 20 games in a row. The fifth-seeded Bulldogs defeated No. 12 University of Texas-El Paso, No. 13 Murray State, No. 1 Syracuse and No. 2 Kansas State to reach the Final Four for the first time in program history under coach Brad Stevens.

Larry Harrison, assistant coach for West Virginia, who also made the Final Four: “[Butler has] always been a good school academically and athletically. Their run in 2010 was a surprise to many including myself. However that is what happens in March, and Butler proved themselves.”

John Antonik, West Virginia historian: “Obviously Syracuse was in the Big East when we were there, so that was a game that got people’s attention, and I think Syracuse might have been in the top-10 or the top-five at the time. I think that was a big win for them, probably got them some confidence as they got deeper into the tournament.”

Will Veasley, member of Butler’s 2009-10 team: “We wanted to shock everyone and win the whole thing. We started off our team meeting the next year with coach Stevens telling us no one outside of this locker room and our program probably thinks we can do it and that was motivation enough for us. It was a goal and no one wanted it to end and we just kept fighting and clawing for one another.”

Joel Bussell, Butler student at the time: “No true fan wants to admit that, but it’s true — no one expected that except the team — they believed in themselves. Butler… against one seeds and two seeds? With names like Syracuse, Kansas St, Michigan State, and finally Duke? We truly felt like the underdawgs.

Emerson Kampen, member of Butler’s 2009-10 team: “Once you get into the season and start playing in conference play, you get a win, you celebrate, and move onto to the next one. Then, the next thing you know, you’re in the Final Four.”

After withstanding a second half run from Kansas State, Butler defeated No. 2 seed Wildcats, 63-56 in the Elite Eight to advance to the Final Four. The Bulldogs would return to Indianapolis, and at their open practice, thousands of Butler fans turned out to show their support.

Kampen: “We pull up on the bus and see Butler shirts, jackets, sweatshirts. We didn’t realize how many people were supporting until open practice. A lot of guys on our team are from Indiana and had a lot of family and friends coming too.”

Campbell Donovan, current Butler player who grew up watching Butler and attended the 2010 Final Four: “I was very shocked because Butler has never been on that stage before. It was a fun, new experience being a young fan.”

Bussell: “This will be hard to believe because Butler is such an orderly and high-achieving school, but the campus became like a circus. News reporters, famous sports announcers and free Nike swag vans swarmed the campus. The weather was great, so the mall was packed and the campus just was enjoying the ride.”

Butler became the smallest school to make the Final Four since 1979, when tournament seeding began. They may have been an all-time underdog, but the Bulldogs had one major advantage: they were playing in their own backyard, at Lucas Oil Stadium.

Kampen: “During the run, you kinda get lost in the moment. Every game you go into, you expect to win. We definitely believed that we could do it. We didn’t talk about it every day, but we knew we could do it especially with the Final Four in Indy.”

Antonik: “Having that tournament in their home state, there’s no question that sure played a role in them probably winning the Michigan State game and playing as well as they did against Duke. You have all those people behind you.”

Veasley: “It was unbelievable, the most fun I had playing basketball in my entire life. Everyone dreams of those moments and getting to that point, but for it to actually come true and being on the floor was unbelievable. It didn’t really hit me until the jump ball and we are out there waiting and you look around and see all the fans and “The Road Ends Here”  banners and you actually understand that Butler University is playing in the Final Four.”

Donovan: “It was only right that Butler’s first Final Four was in its own city. It was special for me because if it wasn’t so close to home I may have never got the opportunity to watch the semifinal game.”

Bussell: “We were the state’s sweetheart — a team that truly embodied Indiana basketball. And we had a chance to play for the big game in its hometown. Bobby Plump bounced a basketball from Hinkle to Lucas Oil.  [Butler president] Bobby Fong hosted a rally on Monument Circle where the whole city cheered. And Lucas Oil Stadium on the night of the championship game was a much larger extension of Hinkle Fieldhouse.”

Despite shooting roughly 30 percent in the game and playing large portions of the second half without Matt Howard and Shelvin Mack, Butler defeated Michigan State 52-50 in the national semifinal game. The Bulldogs became the first team since the shot clock was adopted in 1985 to hold five straight NCAA Tournament opponents to under 60 points in a game.

Veasley: “We celebrated and were excited, but after a short celebration it was time to move on to Duke. You’ve got two of arguably the most well known college basketball programs and we get to compete against them. As a competitor your eyes just light up at a chance to play against those two programs. We knew we could play with anyone and on the biggest stage we proved that to a lot of people who didn’t believe we could make it and didn’t think we should necessarily be there.”

Antonik: “That, there, kind of caught people’s attention. They were going to play their style, so yeah it probably did catch me by surprise, but from that point on, they were a hot team. You look today, in today’s tournament, particularly in today’s game, these teams that have chemistry, and have experienced players, and have guys that play together in systems that they’re recruited specifically for the way [Butler coach Brad Stevens] recruited for that system there, they got a chance for success.”

With their win over Michigan State, the Bulldogs advanced to the national championship, where they were set to face one of the biggest powerhouses in college basketball: the Duke Blue Devils, who were seeking their fourth national championship. While there were plenty of reasons for anxiety leading up to the big game, Butler worked to keep their preparations as normal as for any other game.

Bussell: “At that point, we had proved to be something other than a Cinderella… we deserved to be in that game. Our defense could stop anyone and we had found our confidence.”

Duke jumped out to an early lead in the game, but Butler battled back, showing it was not overwhelmed by the moment. After a back-and-forth first 20 minutes, the Blue Devils lead by one at halftime, 33-32.

Harrison: “Having the game in Indianapolis helped them, but also their team chemistry was unmatched. Butler as well as Brad Stevens were recognized on a national level as one of the best “new” programs.”

Kampen: “We had to wait all day, some of us went to class that day, it was a long day from the moment you wake up — when all you can think about is the game.”

Bussell: “What was surprising was how unprepared Duke felt. Coach K is known for his meticulous preparation, but he met his match in Brad Stevens. They seemed stunned by our ability to challenge them. Little did we know that this game would be the launching pad for Steven’s comparison to Coach K and other great coaches before him.”

Following an extremely tight second half, the Bulldogs found themselves down by one point with 13 seconds remaining. Coming out of a Butler timeout, Gordon Hayward missed a short fade-away jumper with five seconds on the clock. A Duke rebound forced a Shelvin Mack foul, and after making his first free throw, Brian Zoubek intentionally missed his second. With time expiring, Hayward threw up a half court shot, which bounced off both the backboard and rim, giving Duke its fourth national title.

Kampen: “I did think it was going in.”

Donovan: “Obviously everyone would have loved for [Hayward’s] shot to fall, yet that team regardless of the outcome of the game put Butler on the map and has helped this program grow immensely ever since. I am so proud to call myself a Butler basketball player.”

Veasley: “I never had a doubt that shot was going in. I’ve seen his high school shot [to win the state championship] and he had made huge shots for us all year so I just knew where the ball was going and that we had the ball in the hands of who we wanted to be taking the last shot.”

Bussell: “If the shot had gone in…man. Even to this day, the scene plays in my wife’s and my minds (both class of 2012). We are still very close with friends from Butler and every now and then someone inevitably brings it up and we all crumble into a heap of emotions. We all can still feel the ache of the moment. It was supposed to go in.”

Butler fell just short of its Hollywood ending. America’s favorite underdog couldn’t go all the way. But the impact of the Bulldogs’ run was still immense.

Antonik: “[Butler] winning that game, would it have changed things, probably not, but what it did for Butler, not just athletically, but also raised the profile of the school. I’m sure they probably had increased enrollment from students because people knew that name, saw them on TV, watched them and followed them throughout the tournament, I’m sure that probably had an impact, but as far as changing the course or the trajectory of the school or of the sport, I’m not sure that would of happened had they won.”

Bussell: “Maybe [Stevens] would have left that year for another job that would have been irresistible. Or maybe we get more recruiting power and we ascended even higher. But what I do know that had we won, it would have gone down as the greatest game ever in the history of basketball, maybe any sport. The storyline was so gripping that everyone except Duke thought we had to win.”

Veasley: “Butler is already a lot different from when I was there, the shot going in and I think yes it helps, but the back-to-back runs themselves I think did a lot for Butler and built it up to the program that deserves respect and has become a household name.”

This story was updated on April 9 to add additional sources.