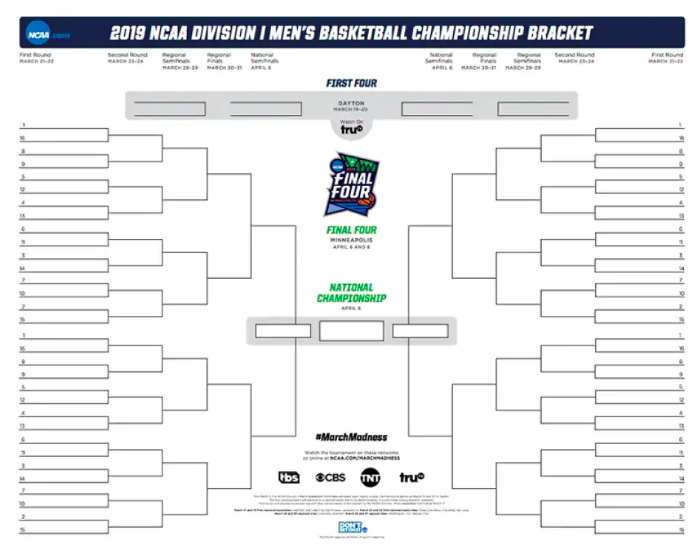 March is here and that means two things — the arrival of spring and March Madness. From hardcore college basketball fans to those who did not catch a game all season, Americans everywhere will be filling out brackets to compete with their friends and family.

While there will be millions of brackets filled out, there will inevitably be a few repeat archetypes you will see in your bracket pools. Let’s dive in and take a look at them.

We all know that one fan. Every single year, the first thing these fans do when they get a hold of their bracket is send Duke all the way to finals to become the winners of the tournament. No matter who is on their team, regular season record or who they may face in the tournament — these guys always have the Blue Devils taking it all. They couldn’t care less about the rest of their bracket.

Although Duke has struggled in tournament play since winning the championship in 2015, with this year’s team comprised of projected NBA first overall pick Zion Williamson and RJ Barrett, it seems they have a decent shot to take back the crown.

So carry on, Duke bandwagoner. This year looks to be as good as any year that your persistence pays off.

This guy is by FAR the most annoying in your bracket pool. He has spent all season watching and “studying” every single team, and claims to know how the whole bracket is going to go.

This guy claims that, based on all his hours of studying, he knows every team’s weaknesses and strengths and which teams are going to pull off the unanticipated upsets — as if he is not just regurgitating what he has heard from the commentators and real analysts of the sport.

Ironically, but predictably, this guy finishes no better than anyone else in the pool and proceeds to claim in frustration that the tournament is “rigged for entertainment value.”

It is always a great sight to watch the overconfident friend being put in their place by the start of the Round of 32.

These dreamers look forward to choosing the unpredictable. They LOVE to choose all those “Round of 64” upsets and take an undeserved amount of pride in sending long shots to the Sweet 16 or Elite Eight, or for the true madmen, to the Final Four.

Some may scoff at their delirious pickings; as noble as their beloved Cinderellian dreams may be, they are so far-fetched that it is almost certain that they will not happen. The bracketeer, however, does not care for their haters, as they believe that their bracket will ultimately end up on top and prove their intellectual superiority over their peers.

Do not count these guys out, though. Every so often, their wildest dreams really do come true. Just last year in the tournament, the first ever upset of a No. 16 seed over a No. 1 seed occurred when UMBC took down the top seed of Virginia in the first round. To go along with that, No. 11 Loyola-Chicago tied being the lowest seed to make the Final Four in the tournament.

So dream on, you radical chance-takers, as your wishes may come to fruition.

This person is just here to be a part of the group. You either invited them into the pool to fill extra space or felt guilty for leaving them out. They couldn’t care less whether their bracket is the best or worst.

With that being the case, they just auto-pick the best seeds winning each matchup until the best seed is the last seed standing. You cannot really go wrong by picking the better seeds to always win, right?

That’s this person’s thinking, and hey, it is the oldest strategy in the book. If it ain’t broke, then don’t fix it. All this person is hoping for is to somehow end up on top and win the prize money for the pool.

Ah, the homer, a staple in sports since the beginning of time. They ride or die by their team, no matter what. Whether their team is No. 1 seed or a No. 16 seed, they have them taking the chip in the end.

Although their loyalty is admirable, this usually costs them in the end when their team falls out after the Round of 32, resulting in them finishing in the lower end of the pool.

Unfortunately for us Bulldogs fans, it looks like we might not be able to watch our beloved team compete in this year’s tournament.

With that being the case, see if your dad will let you hop on his alma mater hype train for the tournament. I am sure your pop would love nothing more than to see you cheer alongside him with blind loyalty for his No. 11 seed team on the bubble.

We have all been here. Your friend’s girlfriend has been pestering him about becoming “one of the guys” and wants to be integrated into your friend group. In what seems to be the universal way of inaugurating her into the group, you invite her to join your bracket pool.

You and your friends do not know how much she knows about college basketball but, fueled with toxic masculinity, think that there is no way she will win the pool.

Come April, however, she makes a fool of you and your assumptions as she sits atop the bracket pool in all her glory. She laughs because on top of stealing time away from the boys, she also makes like a bandit with all the prize money from the pool.