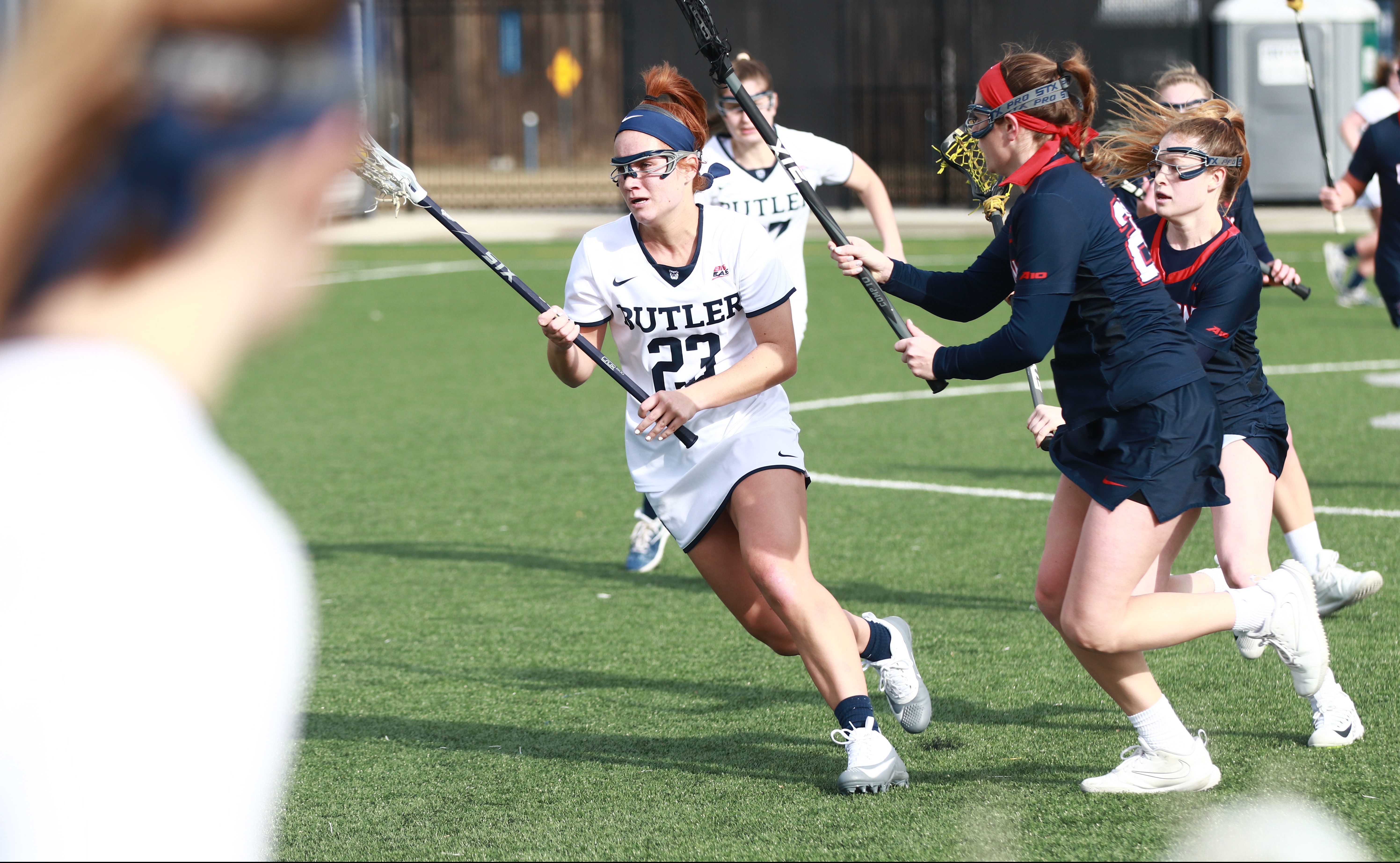 Holly Hall in action during a game this season. Hall and the Butler lacrosse team play Louisville and Gardner-Webb this week. Jimmy Lafakis/Collegian file photo.

After losing four of their last five games and likely dashing any chances of a fifth straight NCAA Tournament appearance, the Butler men’s basketball team returns to Hinkle Fieldhouse for its final home game of the regular season. The Bulldogs will honor the careers of Paul Jorgensen and Nate Fowler during a senior night contest against the rival Xavier Musketeers, who enter the game with five consecutive victories. Xavier overcame a 10-point deficit over the final four minutes to defeat the Bulldogs 70-69 in Cincinnati on Jan. 13. It’s an early 6 p.m. tip for this one, with the game airing on FS1.

Coming off their second win this season, a 10-8 victory over St. Bonaventure on March 1, the Butler lacrosse team will host Louisville on March 6. The Cardinals are coming off a 16-4 loss to No. 19 Notre Dame on March 2, and are 1-5 to begin the season. Last season, Louisville defeated Butler 20-4 at Varsity Field in the Bulldogs’ second game of the season. This game will get underway at Varsity Field at 1 p.m. and stream on the Butler Athletics Facebook page.

The Butler men’s and women’s track teams will wrap up their indoor schedule when they travel to Birmingham, Alabama, for the NCAA Championships. Both teams are coming off of competition in the Big East Indoor Championships, where the men finished fourth out of seven teams and the women finished fifth out of eight teams. The two teams will be aiming to improve upon their fifth and seventh place finishes last year for the men and women, respectively. Competition will get underway on Friday and last through Saturday, after which the teams will begin outdoor action at the Stan Lyons Invitational here in Indianapolis on March 16.

The Butler baseball play will begin their home schedule this season with a three-game weekend series against Purdue Fort Wayne starting Friday afternoon. The Bulldogs are coming off a 3-4 performance at the Russmatt Central Florida Invitational over the weekend, with wins over Saint Peter’s, Central Michigan, and Hofstra. Now at 5-5 on the season, Butler will face off against a Mastodons team that enters the week with a 4-6 mark and plays at Dayton on Tuesday. First pitch from Bulldog Park is scheduled for 3 p.m. and the game will air on the Butler Athletics Facebook page.

Softball vs. UIC and Green Bay

After almost two weeks off, the Butler softball team the softball team will travel to Carbondale, Illinois, to participate in the Saluki Invitational, hosted by Southern Illinois. Butler is coming off a 2-2 weekend in the Hilltopper Classic on Feb. 24 and 25 with wins over Indiana State and Cleveland State. The Bulldogs will play five games over the weekend, starting with contests against UIC and Green Bay on Friday. UIC is coming off a 2-2 showing over this past weekend and is 4-10 on the season. The Bulldogs defeated the Flames 7-3 in Chicago last season. Green Bay, meanwhile, didn’t play at the Cougar Classic in Edwardsville, Illinois, over the weekend due to weather. The Phoenix are 2-3 to start the year. The UIC game is slated for 3:30 p.m., while the Green Bay game is scheduled for 8 p.m.

The Butler men’s and women’s track teams will wrap up competition at the NCAA Indoor Championships on Saturday.

After a rough loss at Hinkle Fieldhouse to the Friars just last week, the men’s basketball team will wrap up the regular season with a road game at Providence on Saturday. On Feb. 26, the Bulldogs shot 28 percent from the field in the first half before climbing back into the game and eventually losing 73-67 in one of their worst losses of the year. While its NCAA Tournament prospects may be bleak, Butler isn’t even guaranteed an NIT bid at this point, as it needs at least one win in their final two regular season games to be over .500 for the season. If the Bulldogs drop their game against Xavier on Tuesday, they’ll likely need a win against Providence to give themselves a chance of playing past the Big East Tournament. Tipoff from the Dunkin’ Donuts Center is slated for noon, and the game will air on Fox Sports Networks.

The Butler baseball team will continue its three-game series against Purdue Fort Wayne on Saturday with a 2 p.m. contest airing on the Butler Athletics Facebook page.

Softball vs. Miami (Ohio) and Iowa

The softball team will continue its five-game weekend with contests against Miami (Ohio) and Iowa on Saturday. The RedHawks enter the invitational with an 8-6 overall mark following a 2-2 weekend at the Lipscomb Tournament in Nashville, Tennessee, over the weekend. The Hawkeyes are coming off a 10-3 win over Ball State on Sunday in Clearwater, Florida, and enter the week with a 11-8. Butler and Iowa split two games against each other in College Station, Texas, last season. First pitch for the Miami game is slated for 5:45 p.m., and the Iowa game is set for 8 p.m.

Following four straight home games, the lacrosse team will travel to Boiling Springs, North Carolina, for a Sunday matchup with Gardner-Webb. The Runnin’ Bulldogs enter the week with a 1-2 record, with their sole win thus far coming against Wofford. These two teams last played each other during Butler’s inaugural season in 2017, with the Bulldogs winning 16-13 for their sole win of the year. Play will get underway at noon for this game as Butler looks for another win against the Runnin’ Bulldogs.

The Butler baseball team will wrap up its three-game series against Purdue Fort Wayne with a 1 p.m. series finale streaming on the Butler Athletics Facebook page.

Following a 62-60 overtime win against Villanova to end the regular season, the Butler women’s basketball team will travel to Chicago for the Big East Tournament. With an 11-7 conference record, the Bulldogs will be the third seed in the tournament, and face sixth-seeded Creighton. Butler swept the regular season series against the Bluejays by a combined score of 141-89 and will look for a third victory over Creighton this year and a fourth straight year with a win in the Big East Tournament. Tipoff at Wintrust Arena is set for 9:30 p.m. and the game will be broadcast on FS2.

The softball team will wrap up play at the Saluki Invitational with a game against the host, Southern Illinois. The Salukis enter the week with an impressive 11-5 record to start the season. The Bulldogs last played Southern Illinois in 2016, dropping two of three games. First pitch is slated for 5:45 p.m for this year’s contest.