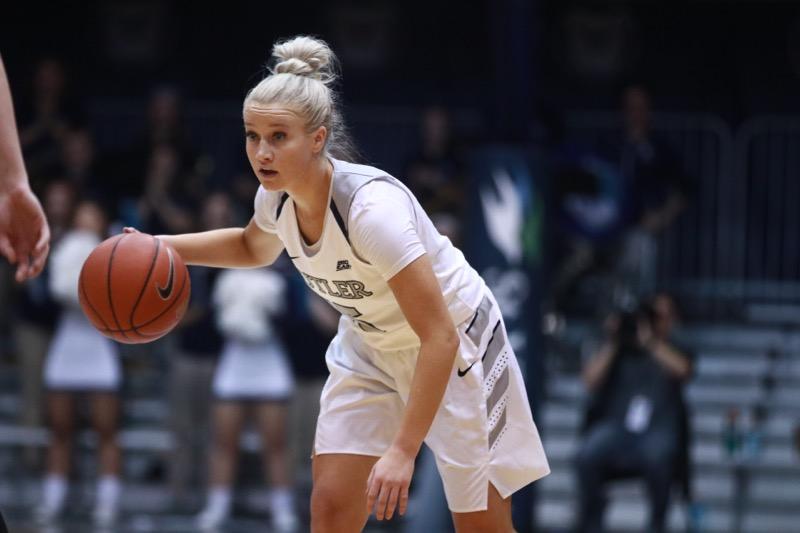 Whitney Jennings during the Northeastern game. Jennings scored her 1,000th career point in the win. Photo by Jimmy Lafakis.

Though the Butler women’s basketball team didn’t lead the game until the 8:19 mark in the second quarter, the Bulldogs defeated Northeastern in the first round of the WNIT, 89-72.

Recording her 1,000th career point, Whitney Jennings had a game-high 29 points, including seven 3-pointers. Her 1,000th point came with 5:51 to go in the game, capping off two quarters of domination by the Bulldogs.

“I’m just so happy for [Jennings],” teammate Tori Schickel said. “She deserves it all. For her to get that in a home game at the NIT, that’s very cool.”

Things started off shaky for Butler. The Bulldogs lost the first quarter 23-17, a product of forcing things offensively and mental lapses on the defensive end. On both sides, Northeastern hurried their pace by double-teaming the post and pick-and-roll. And after the first quarter, Butler had six turnovers.

“We weren’t getting in gaps,” Schickel said. “We were a little slow on our feet in the first. Once we got into a rhythm offensively, we settled down a little bit.”

In the second quarter, Butler flipped the script, forcing eight turnovers. And they turned those turnovers into buckets by running in transition, rattling off four consecutive fastbreak layups or foul attempts that pushed the lead to 52-36 at the end of the first half. In the half-court offense, Schickel started taking her time, dishing out nine assists by the final buzzer.

By the end of the third quarter, the score was 76-44. Though Northeastern won the final quarter, 28-13, it was too little too late.

Kristen Spolyar added 21 points, Schickel had 12, and Shae Brey chipped in with 10 points. Defensively, Spolyar had three steals while Michelle Weaver, Naira Caceres, and Shickel each had two.

Butler advances to the second round of the WNIT, where they’ll play Kent State, who are 20-12 overall and were 11-7 in the MAC conference. The game will be at Hinkle Fieldhouse on March 23 at 7 p.m.