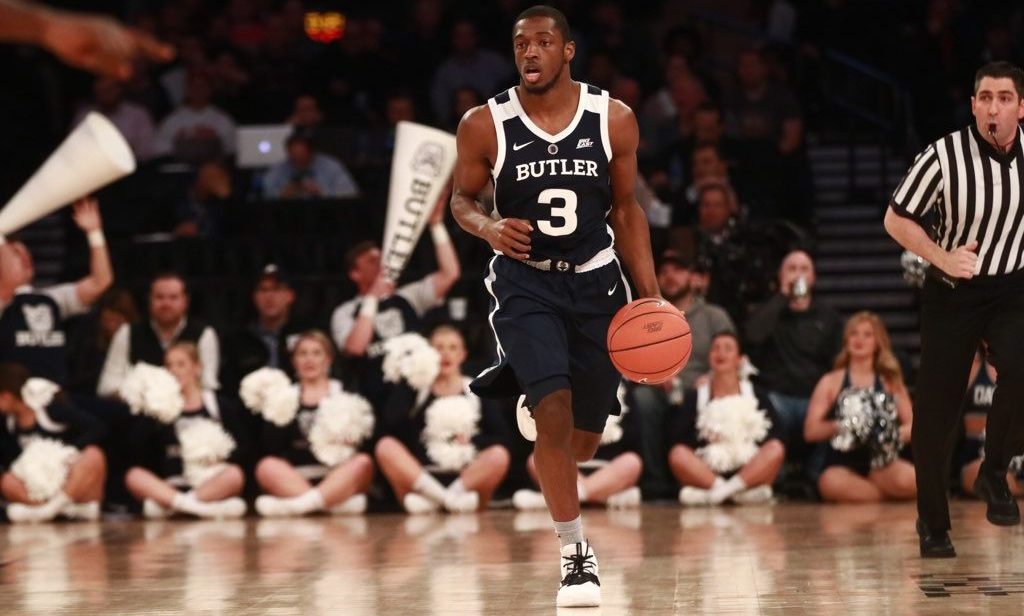 Kamar Baldwin brings the ball down the floor during Butler’s game against Providence in the first round of the Big East Tournament on March 13. Baldwin scored eight points in the 80-57 loss. Photo by Jimmy Lafakis.

The Butler men’s basketball team fell to Providence for the third time in 16 days on March 13, this time in the first round of the Big East Tournament. Here’s a look at nine key quotes from after the game.

On the game: “It was fun. It was fun. Any time you have an opportunity to win in this building and play in this tournament is something special about it, and couldn’t be more happy for our young men.”

On Butler’s lead early in the first half: “I just thought we were a little nervous, a little tight, a little antsy. This is our third time playing these guys in the last 16, 17, 18 days, so we were very familiar with one another what we were all trying to do.”

On Maliek White’s performance: “Maliek looked like Superman out there today. I was really happy for Maliek. It’s been a — honestly, I’m really, really proud of Maliek and playing with that level of energy and enthusiasm, making shots, leading the team. That was pretty fun to watch on this stage. We’re going to need him to do that again in about 15 hours.”

“It was fun” Ed Cooley said on the Big East Tournament win against Butler. pic.twitter.com/JEL4e5Cq2f

On Kamar Baldwin: “He was hurting us early, but he got in foul trouble. He was trying to balance how to guard. I thought our staff did a really good job trying to run isos in particular when Alpha was on him, when Isaiah was on him, to try to get him around the basket a little bit. But he’s one of the best players in our league, and he’s going to be — we’re going to have to deal with him another year.”

On Villanova tomorrow: “We’re going to play excited. We are happy to advanced. These tournaments, it’s about advancing and moving on. … Villanova is a very tough out. We’ve played them a ton. We know exactly what they are. They know exactly who we are. We’re making some perimeter shots and not giving up threes, will give ourselves an opportunity.”

On the loss: “I thought our guys had a good fight. I thought the start went well, and they came out and adjusted about halfway through the first half and made it more of a smash-mouth game to get themselves back in it, and then give Maliek White credit. He hit a couple of big threes to get the momentum on their side heading into the half, and I thought that was a game changer, and we were trying to recover from that.”

On adjusting play against Providence for a third time in 16 days: “I thought the adjustment we made led to early success at the start of the game. We did a good job pressuring them. We switched a couple matchups, and they were on their heels to start, turned it over a few times, or they did not get into what they like to get into. Then we mixed up some defenses. … If they’re making threes, they’re a different team to guard.”

Lavall Jordan on the loss. pic.twitter.com/cdd3nfzIXU

On Butler’s one win in Big East Tournament history: “I know you come and put your best foot forward and fight the best you can. You try to adjust and coach the best you can and see where the chips fall, but I don’t know if there’s anything to it other than every year’s different, every team’s different, and you go out there and do what you know and do what’s given you success in that season with that group.”

On a potential postseason tournament: “We’ll see what happens. I’d love to have this group be able to fight together again.”