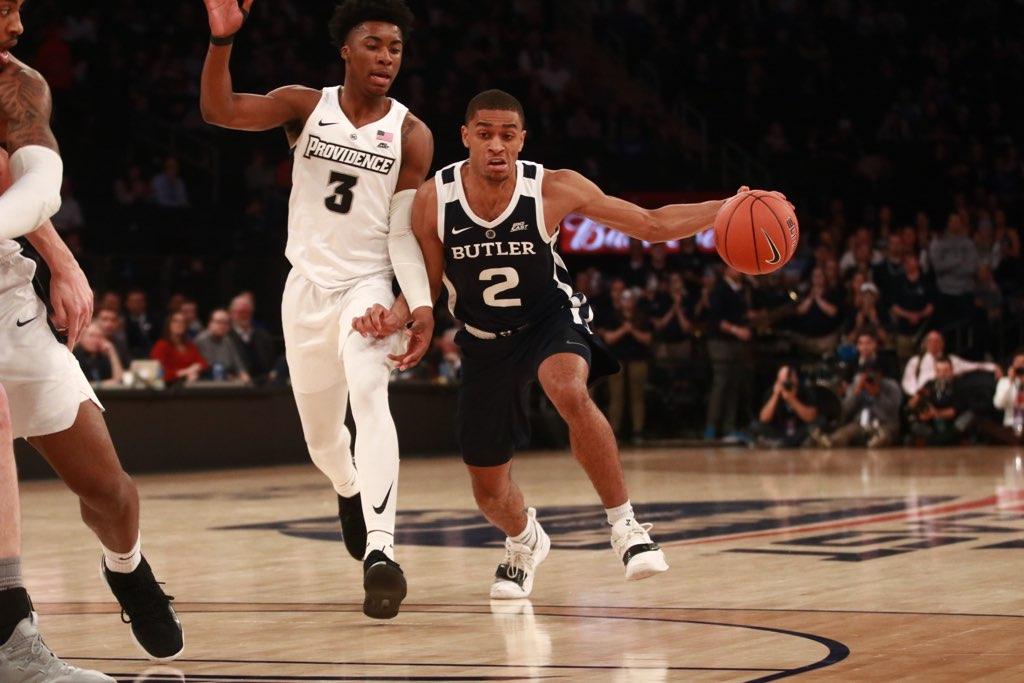 The Butler men’s basketball team bowed out in the first round of the Big East Tournament with a 80-57 loss to Providence. Butler held an early 17-7 lead but was outscored by 33 the rest of the way. Here are three takeaways from the Bulldogs’ third loss to the Friars in 16 days.

Things could not have started much better for the Bulldogs. Butler made eight of its first 16 shots while Providence started 2-of-12 from the field. The Bulldogs went over eight minutes without committing a foul or turnover. During that time, the Friars scored five points. Then it all went downhill. At halftime, the Bulldogs had seven turnovers and seven fouls. Providence closed the half on an extended 31-10 run and made its last eight field goals before the break. What appeared to be an incredibly promising beginning turned into a replica of the regular season finale in 10 minutes.

There was always going to be a Friars run the Bulldogs would have to fend off if they wanted to stay alive. The drastic turn this game took was largely because of the way Butler played right into Providence’s hands during the comeback. Butler’s early dominance in the paint turned into an advantage for the Friars and the turnovers started piling up. The Bulldogs began making fundamental mistakes on defense and stopped attacking the basket. When the collapse started, Butler wasn’t able to muster any kind of response.

2. The Bulldogs need more from their starting five.

Maliek White and Alpha Diallo outscored Butler’s starters by themselves. The duo combined for 37 points on 15-of-24 shooting. No Butler player scored more than 14. Paul Jorgensen and Sean McDermott missed their first 10 shots and contributed a total of seven points while going 1-of-6 from three. The Bulldogs held a 24-20 advantage in bench points but it doesn’t matter when the starters are outscored by 27.

Aaron Thompson and Nate Fowler were the only Butler starters to score above their season average. They are also the team’s sixth and seventh leading scorers. The Bulldogs’ top three scorers — Kamar Baldwin, Jorgensen and McDermott — average 39 points a game among them. They scored 15. Butler needed its best players to carry the load if the Bulldogs had any hope of winning this game. Even a mediocre performance from the main offensive weapons could have made things interesting. Instead, they were nowhere to be found.

Thompson scored eight of Butler’s first 10 points, highlighted by his 10th 3-pointer of the season. He finished with 12 points — his highest total since Jan. 22 — and made all five of his field goal attempts. Thompson also dished out six assists and grabbed four rebounds while only turning the ball over twice. For the 10 minutes when Butler was in control, it was because Thompson was attacking the basket and heavily involved in the offense.

The one positive takeaway from this game was Thompson’s ability to make an impact on the offensive end of the floor. For Butler to score more often and more consistently next season, he has to continue developing his jump shot. Thompson took a significant step forward as a sophomore, so it’s realistic to expect a similar jump in his junior year. All he needs to do is get to the point where opponents can’t sag off of him. If that happens, the Bulldogs will be a completely different — and much more dangerous — team on offense.