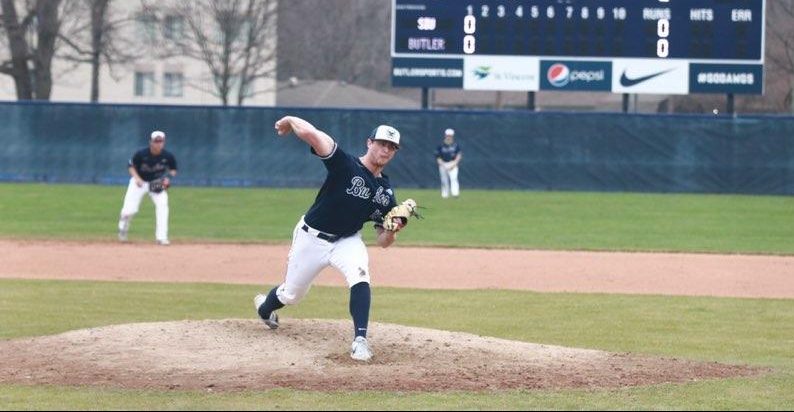 Ryan Pepiot on the mound for Butler. Pepiot picked up the win in the Bulldogs’ victory over Southern Illinois on March 29. Photo by Jimmy Lafakis.

The weekend series between Butler and Southern Illinois University’s baseball teams was cut short due to the weather.

On March 29, it was Ryan Pepiot who was the star of the show for Butler, tossing 6.2 innings, giving up only two earned runs while striking out a season-high 12 batters in a 5-4 win.

Butler would give him early run support with a Nathan Dill RBI double in the second inning. Zach Jarosz would single to score Dill later in the inning.

A Dill fielder’s choice would score Robbie McCargar and the Bulldogs extended their lead to 5-1.

After a three-run inning from the Salukis in the seventh, it became just a   game.

Hanging on until the ninth, Butler called on closer Jack Pilcher to shut the door. He did, and Butler improved to 16-9 on the year.

The Bulldogs will next take on Dayton on the road on April 2, which will be their final tuneup before they begin Big East Play against St. John’s starting the 5th.