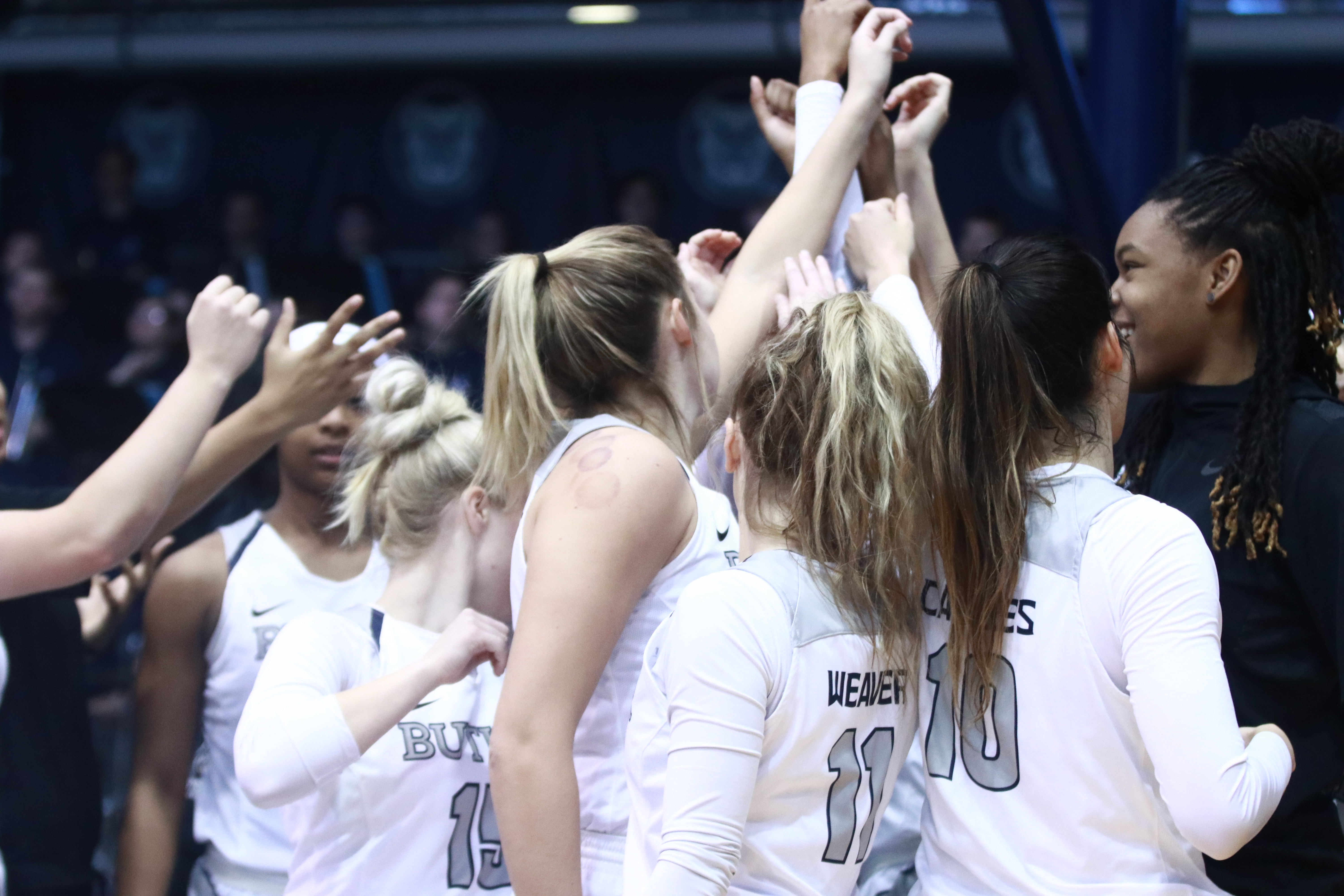 Butler’s women’s basketball team huddles up before a game. The Bulldogs will be the No. 3 seed in the Big East Tournament.

The Butler women’s basketball team is making history, and the students are ready to be a part of it.

It has been a historical season for the team — the best start in Butler women’s basketball history, beating No. 11 Marquette on the road and Tori Schickel breaking the school record in rebounds.

Because of the success this Butler team has had, Butler athletics decided to host a trip to the Big East Tournament in Chicago. In the past, Butler has only held trips for the men’s team, including a bus trip to New York City where students stay in a hotel near Madison Square Garden. This is the first time that Butler has given students the opportunity to support the women’s team on the road at the conference tournament.

“The women’s team is a little underrated and they are such a great group of talented girls that remind me why I used to play the game,” freshman Fiona Spuria said. “My friends and I are considering going. The games would be so hype and I’m sure the girls team would love a huge student section.”

This year, the Big East started an initiative to drive attendance to the tournament by encouraging schools to host trips for the students. The Butler athletics marketing team decided this would be a perfect year for the trip because of the tournament’s location.

“With the Big East Tournament being in Chicago, we wanted to get some fans up there to support the Dawgs,” Macy Yount, external operations assistant for Butler athletics, said. “We thought an up and back trip would be more appealing to our fans.”

Senior women’s basketball player Tori Schickel is excited for the team to have a fan section on the road at the Big East Tournament.

“I think it is awesome that they are having an option for students to bus for our tournament,” Schickel said. “Hopefully this will draw students to Chicago to support us.  We have received so much support this year it has been great to see. It truly does help us. It brings us momentum knowing that we have people there to cheer us on.”

Women’s basketball manager Daniel Daily is excited for the recognition that the team is getting after such a successful season.

“This is the best Butler basketball you can see all year, and most students are from the Chicago area, so this is perfect for Butler fans,” Daily said.

Butler athletics emailed out a flyer to Dawg Pound members on Feb. 13 with information regarding the Big East Women’s Basketball Tournament. They explained they are offering the round-trip bus to Wintrust Arena on Sunday, March 10 for the quarterfinals.

While the email did not state a registration deadline, students interested should claim their spot soon by emailing athleticsintern@butler.edu. Any student, Dawg Pound member or not, interested in attending the game is welcome to ride on the fan bus.

The cost is $8 per person plus any Ticketmaster fees. Game times are to be determined depending on the conference standings. Butler has clinched the No. 3 seed in the tournament and will play at 8:30 p.m. CT.