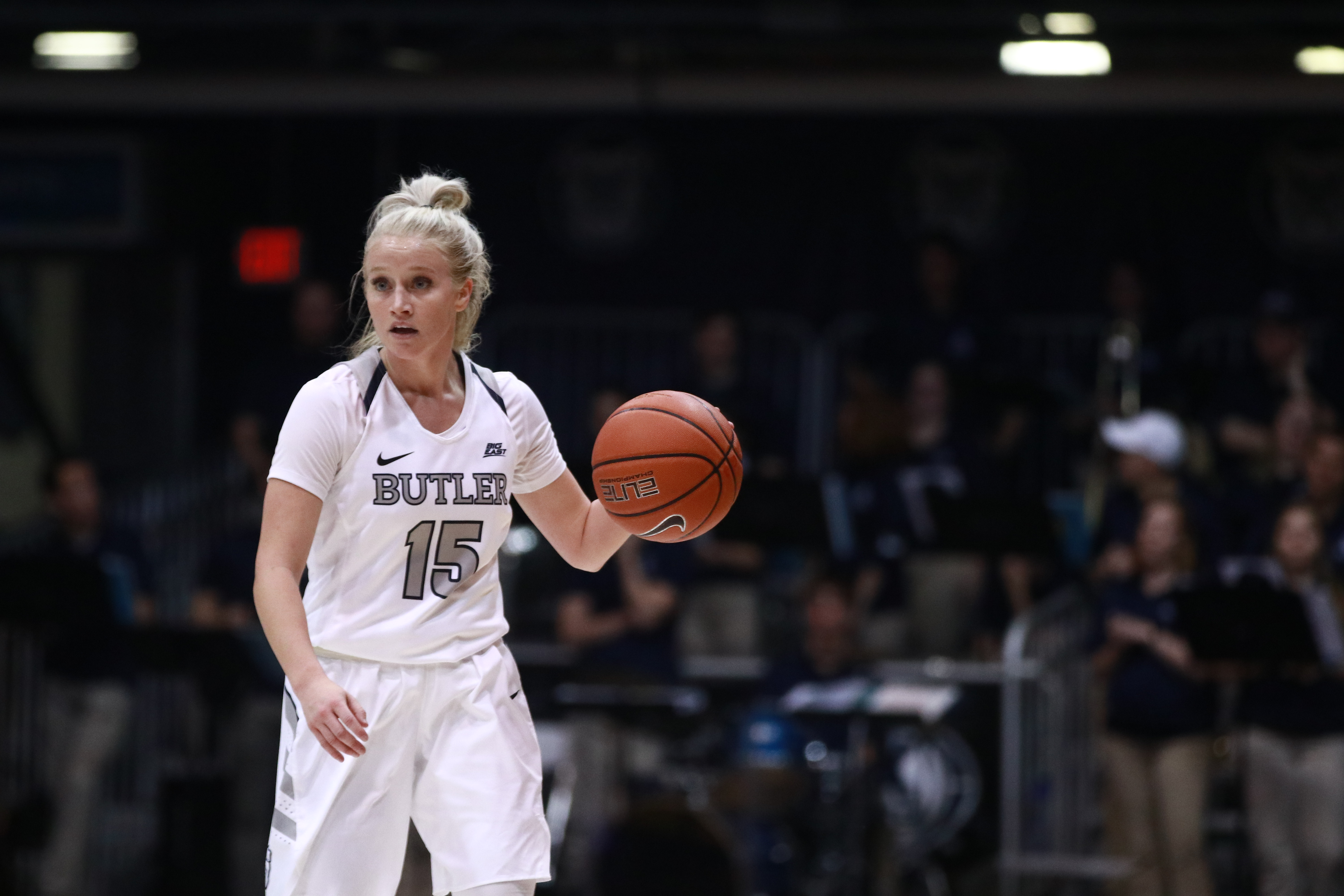 Whitney Jennings looks for a move during a game this season. Jennings and the Butler women’s basketball take on Marquette and DePaul on the road this week. Jimmy Lafakis/Collegian file photo.

After an 16-8 home loss to Duquesne to open the season, the Butler lacrosse team travels north to take on Detroit Mercy on Tuesday. In their game against Duquesne on Feb. 14, the Bulldogs trailed by just two goals heading into halftime but lost the second half 10-4. Detroit Mercy, meanwhile, is coming off a 19-5 loss at Ohio State on Feb. 10. The Bulldogs fell to the Titans 16-6 at Varsity Field last year. Butler will look to turn the tables on Detroit Mercy this time around, with play getting underway at Ultimate Soccer Arenas at 1 p.m.

The Butler women’s swimming team will travel to Long Island, New York, to compete in the Big East Championships from Feb. 20 to Feb. 23. The team’s last competition was on Jan. 27, when the Bulldogs finished seventh out of 10 teams at the Annual Butler Invitational. The best performance in that competition came from Emma Spotts, who placed second in the 100-yard breaststroke. At the conference championships a year ago, Butler finished fifth out of six teams, with Olivia Allen setting a new school record in the 1,650-yard freestyle.

Following its 91-78 win over DePaul on Feb. 16, the Butler men’s basketball team will travel to Milwaukee, Wisconsin, to take on the Marquette Golden Eagles. Marquette sits at second in the Big East with a 10-2 conference record, while the Bulldogs stand alone in fifth place with a 6-7 conference mark. When these two teams met at Hinkle back on Jan. 30, Markus Howard went off for 32 points for the Golden Eagles and shot 8-of-16 from beyond the arc, as Marquette defeated Butler 76-58. The Bulldogs shot just 33 percent from the field in the game, with Kamar Baldwin’s 16 points leading the team. Tipoff at Fiserv Forum is set for 9 p.m. and the game will be broadcast on CBS Sports Network.

The women’s swimming team will continue competition in the Big East Championships on Thursday.

The women’s swimming team will continue competition in the Big East Championships on Friday.

The Butler men’s and women’s track teams will travel to Geneva, Ohio, to compete in the Big East Indoor Championship from Feb. 22-23. At last year’s event, the men finished fifth out of seven teams while the women finished seventh out of eight teams. Sophomore Barry Keane finished third in the 5,000-meters and second in the 3,000-meters last year, while junior Josephine Thestrup finished fourth in the mile and fifth in the 3,000-meters. It’s both teams’ final competition before the NCAA Championships in mid-March.

Softball at the Hilltopper Classic vs. Indiana State and Western Kentucky

Following a 2-3 showing at the Madeira Beach Invitational which moved them to 4-6 overall, the Butler softball team will look to jump start their season with a trip to Bowling Green, Kentucky, for the five-game Hilltopper Classic. The Bulldogs will begin the weekend with contests against Indiana State and Western Kentucky on Friday. The Bulldogs defeated the Sycamores 2-1 last season behind seven innings of one-run ball from pitcher Alyssa Graves. Indiana State is 5-1 to start their season. Meanwhile, this is Butler’s first meeting with Western Kentucky since 2016. The Hilltoppers are 6-2 this season following a 2-1 series win over Western Illinois. The Indiana State game will get underway at 11 a.m. while the Western Kentucky contest is slated to begin at 4 p.m.

Coming off a 2-1 series win against Rider to begin the season, the Butler baseball team will travel to New Orleans, Louisiana, to face three different opponents over the weekend. The Bulldogs will start the weekend with a game against the Rutgers Scarlet Knights. Rutgers was not among the top six teams in the Big Ten preseason coaches poll. The Scarlet Knights were swept by Miami (FL) to begin the season, and will enter the game with an 0-3 record. First pitch for this one is slated for 12:30 p.m.

Following its match at Detroit Mercy, the lacrosse team will return home to face Kent State on Friday. This is the inaugural season for Golden Flashes in lacrosse. Kent State lost its first game of the season on Feb. 10, falling 19-8 to Cincinnati, before falling to Robert Morris 11-6 on Feb. 16. The game will get underway at Varsity Field at 3 p.m and stream on the Butler Athletics Facebook page.

After a disappointing overtime loss to Providence on Feb. 17 which moved them to 9-5 in conference play, the Butler women’s basketball team will travel to Milwaukee, Wisconsin, to take on Marquette on Feb. 22. The Golden Eagles used a 30-13 third quarter to beat the Bulldogs at home back on Jan. 27, and the team currently sits at the top of the Big East with a 13-1 conference record. Tipoff at the Al McGuire Center is scheduled for 8 p.m., and the game will be streamed on the Big East Digital Network.

The women’s swimming team will wrap up competition in the Big East Championships on Saturday.

The men’s and women’s track teams will continue competition at the Big East Indoor Championships on Saturday.

Following their early-week match against UIndy, the men’s tennis team will travel to DeKalb, Illinois, to compete against Northern Illinois and Green Bay. The Huskies are 7-4 and coming off shutout wins against Eastern Illinois, Wright State, and St. Francis on Feb. 9 and 10. Green Bay, meanwhile, is 1-5 this year. The Bulldogs defeated the Phoenix 4-2 in West Lafayette, Indiana, last year. The Northern Illinois match begins at 11 a.m. while the Green Bay match will start at 4 p.m.

Softball at the Hilltopper Classic vs. Cleveland State and TBD

The softball team will continue their weekend at the Hilltopper Classic with two games on Saturday. The Bulldogs will take on Cleveland State at 11 a.m. and another team yet to be determined. The Vikings are 1-3 overall to start the year, with their only win coming in extra innings against Wagner.

The baseball team will continue play over the weekend with a game against Chicago State. Butler last played the Cougars in 2017, winning 6-2 in Chicago behind seven zero earned-run innings from Ryan Pepiot. First pitch is slated for 6 p.m. for this evening contest.

In their first action since October, the Butler women’s golf team will travel to Kiawah Island, South Carolina, to compete in the Edwin Watts Kiawah Island Classic from Feb. 24 to 26. The team played in four competitions during the fall season, winning the Butler Fall Invitational in their best performance of the season. In their most recent competition, senior Lauren Tibbets finished fifth as the Bulldogs placed seventh out of 13 teams in the Charles Braun Jr. Intercollegiate in Evansville, Indiana.

Softball at the Hilltopper Classic vs. TBD

The softball team will wrap up play at the Hilltopper Classic on Sunday with a final game against a team yet to be determined.

Following its games against Detroit Mercy and Kent State, the lacrosse team will return to Varsity Field to take on Central Michigan in the final game of a three-game week. The Bulldogs have played the Chippewas in each of the last two seasons, losing both contests by a combined score of 33-18. Central Michigan was picked by coaches to finish third out of six teams in the Southern Conference, and is coming off a 20-4 loss to Michigan to begin the regular season. Play gets underway at Varsity Field at 12 p.m. and the game will be streamed on the Butler Athletics Facebook page.

The baseball team will wrap up its three-game weekend with a Sunday game against host New Orleans. The Privateers enter the week with a 2-1 record following a series win against Michigan State to begin the season. New Orleans was picked by coaches to finish seventh of of 13 teams in the Southland Conference this season. First pitch for this game is slated for 1 p.m.

The women’s basketball team will wrap up its conference road slate on Sunday when the Bulldogs travel to Chicago to take on DePaul. The Blue Demons enter the week with a 10-4 conference record, good for second in the Big East. In their matchup at Hinkle Fieldhouse on Jan. 25, Butler led DePaul 67-56 at the end of the third quarter before a 30-11 Blue Demons run over the final ten minutes gave the Bulldogs their second conference loss. Tipoff at Wintrust Arena is set for 3 p.m., and the game will be broadcast on the Big East Digital Network.