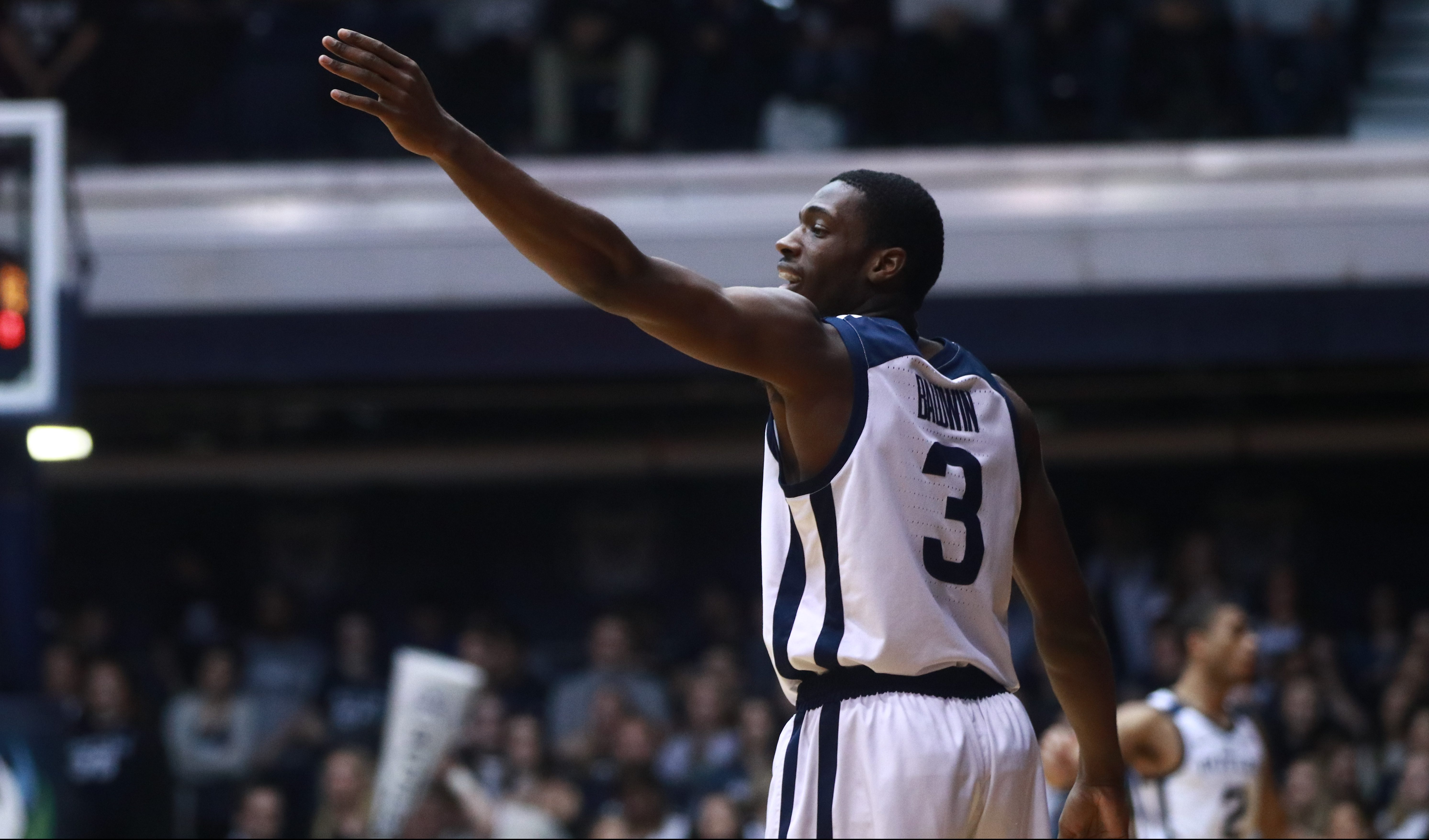 Kamar Baldwin and the Butler men’s basketball team will face St. John’s and DePaul during the week of Feb. 11. Baldwin scored a season-high 30 points during the team’s previous matchup against the Red Storm. Jimmy Lafakis/Collegian file photo.

Coming off of a crucial win against Georgetown on Feb. 9, the Butler men’s basketball team will travel to Queens, New York, for a Tuesday night matchup against St. John’s. The two teams will enter the game with identical 5-6 conference records, part of a six-way tie for third place in the Big East. Back on Jan. 19, Kamar Baldwin scored a season-high 30 points while Jordan Tucker tallied a career-high 24 points as the Bulldogs defeated the Red Strom 80-71 at Hinkle Fieldhouse. Both teams are 2-3 since that matchup, and both will be looking for a win to help get them out of the cluster in the middle of the Big East standings. Tipoff at Carnesecca Arena is set for 8:30 p.m. and the game can be seen on CBS Sports Network.

The Butler lacrosse team will open up its 2019 season with a home matchup against the Duquesne Dukes. Following 1-16 seasons the last two years, the Bulldogs will aim to get their program’s third season off on a positive note. Duquesne, meanwhile, is coming off 22-9 win over Longwood on Feb. 10. Last year, the Dukes finished 4-12 overall and 2-7 in Atlantic 10 play. It will be just the second game for new Duquesne head coach Corinne Desrosiers, who previously served as Florida Tech’s head coach for four seasons. The game will get underway at Varsity Field at 3 p.m. and will be streamed on the Butler Athletics Facebook page.

The Butler men’s and women’s track teams will compete in the Friday Night Special, hosted by Eastern Illinois University, on Friday. The Bulldogs last participated in the event, held in Charleston, Illinois, back in 2016. Both teams are coming off of competition at the Husky Classic and Hoosier Hills Invitational this past weekend.

Softball at the Madeira Beach Invitational vs. Delaware and Murray State

The Butler softball team will travel to Clearwater, Florida to compete in the Madeira Beach Invitational in their second weekend of play down south. The team is coming off a 2-3 showing in the Total Control Sports Invitational in Rosemont, Illinois, this past weekend. The Bulldogs will begin their five-game weekend slate against Delaware on Friday afternoon before facing Murray State later in the day. Delaware is coming off an 18-31 season and was picked by coaches to finish seventh out of eight teams in the Colonial Athletic Association (CAA) under first-year head coach Jen Steele. Murray State, meanwhile, finished last season with a 16-36 overall mark and was predicted to finish ninth out of 12 teams in the Ohio Valley Conference (OVC). First pitch for the Delaware game is scheduled for 2 p.m., and the Murray State game will follow at 4:30 p.m.

The Butler baseball team will officially begin its regular season with a three-game series in Lexington, South Carolina, against the Broncos of Rider University. The Bulldogs were picked to finish fifth out of seven teams in the Big East following a 34-20 campaign which included a 9-8 conference record. The Broncos posted a 7-16 mark in the MAAC conference last season and were picked to finish ninth out of 11 teams this year. The first game of the series will get underway at 7 p.m.

With just six regular season games remaining, the Butler women’s basketball team is looking to improve its resume in the hopes of making the NCAA Tournament for just the second time in program history. Coming off of a 25-point win over Xavier on Feb. 8, the Bulldogs will face a Creighton team they defeated by 32 points in Omaha back on Jan. 20. Butler really can’t afford any bad losses the rest of the way, and Creighton’s 4-8 mark in conference play means the Bulldogs really need to, and should, come out on top. Tipoff at Hinkle Fieldhouse is slated for 7 p.m. and the game will be broadcast on the Big East Digital Network.

The Butler women’s tennis team will travel to Evansville, Indiana, to face the Eagles of Southern Indiana. The Bulldogs are coming off a strong weekend of play, as the team posted their first shutout win of the season on Feb. 9 against Indiana Wesleyan before soundly defeating Denison 6-1 on Feb. 10. Southern Indiana enters the week with a 2-2 mark and will face Lindenwood University-Belleville on Feb. 15. The Eagles were picked to finish fifth out of six teams in the East Division of the Great Lakes Valley Conference (GLVC). The competition will get underway at the Evansville Tennis Center at 4:30 p.m.

Men’s golf at the Invitational at Savannah Harbor

The Butler men’s golf team will compete in the Invitational at Savannah Harbor in their first action of the spring season. The Bulldogs finished first in the Butler Fall Invitational back in early October but finished fourth or worse in their other three fall competitions. Play at the Savannah Harbor Golf Club will get underway on Saturday and continue into Sunday.

The men’s and women’s track teams will also send a group of athletes to the Alex Wilson Invitational, which takes place on Saturday in South Bend, Indiana. This marks the teams’ final competition before the Big East Indoor Championships, which begin Feb. 22.

Softball at the Madeira Beach Invitational vs. George Mason and Holy Cross

The softball team will continue play in the Madeira Beach Invitational on Saturday with games against George Mason and Holy Cross. George Mason has lost all three games they’ve played this season by a cumulative score of 22-0. The Patriots are coming off a 12-11 showing in the Atlantic 10 Conference last year. The invitational will be the first games of the season for the Crusaders, who were selected to finish fifth out of seven teams in the Patriot League after a 5-13 mark in conference last year. The George Mason game will get underway at 9 a.m., while the Holy Cross contest is slated for 11:30 a.m.

The baseball team will continue their three-game series with Rider on Saturday. First pitch is set for 6 p.m.

The men’s basketball team will return home for its first game at Hinkle Fieldhouse in two weeks when they face off against the DePaul Blue Demons. Baldwin and Tucker were also the top performers when the Bulldogs defeated DePaul 87-69 in Chicago on Jan. 16. Baldwin scored 17 points and tallied a career-high 14 rebounds, while Tucker had a breakout game with 19 points and eight boards. Like St. John’s, DePaul is one of the five teams tied for third in the Big East with a 5-6 record entering the week. Tipoff from Hinkle is slated for 8 p.m., and the game will be broadcast on FS1.

The men’s golf team will continue play in the Invitational at Savannah Harbor on Sunday.

The baseball team will wrap up their three-game season-opening series against Rider on Sunday with an 11 a.m. contest.

Softball at the Madeira Beach Invitational vs. Drexel

The softball team will wrap up play in Clearwater, Florida on Sunday with a matchup against the Dragons of Drexel University. The invitational will mark the beginning of the season for the Dragons, who finished last in the Colonial Athletic Association (CAA) last season with a 3-18 conference record. First pitch is slated for 11:30 a.m.

The women’s basketball team will look for revenge when they face off against Providence on Sunday. The first meeting between the two teams, in Rhode Island, was just the fourth triple-overtime game in Big East women’s basketball history. By the third overtime period, Whitney Jennings was the only member of Butler’s starting five who hadn’t fouled out and the Bulldogs fell 74-68. The Friars are currently part of a three-way tie for fourth in the conference with a 6-6 Big East record. The contest will be streamed on the Big East Digital Network. Tipoff at Hinkle Fieldhouse is scheduled for 2 p.m.