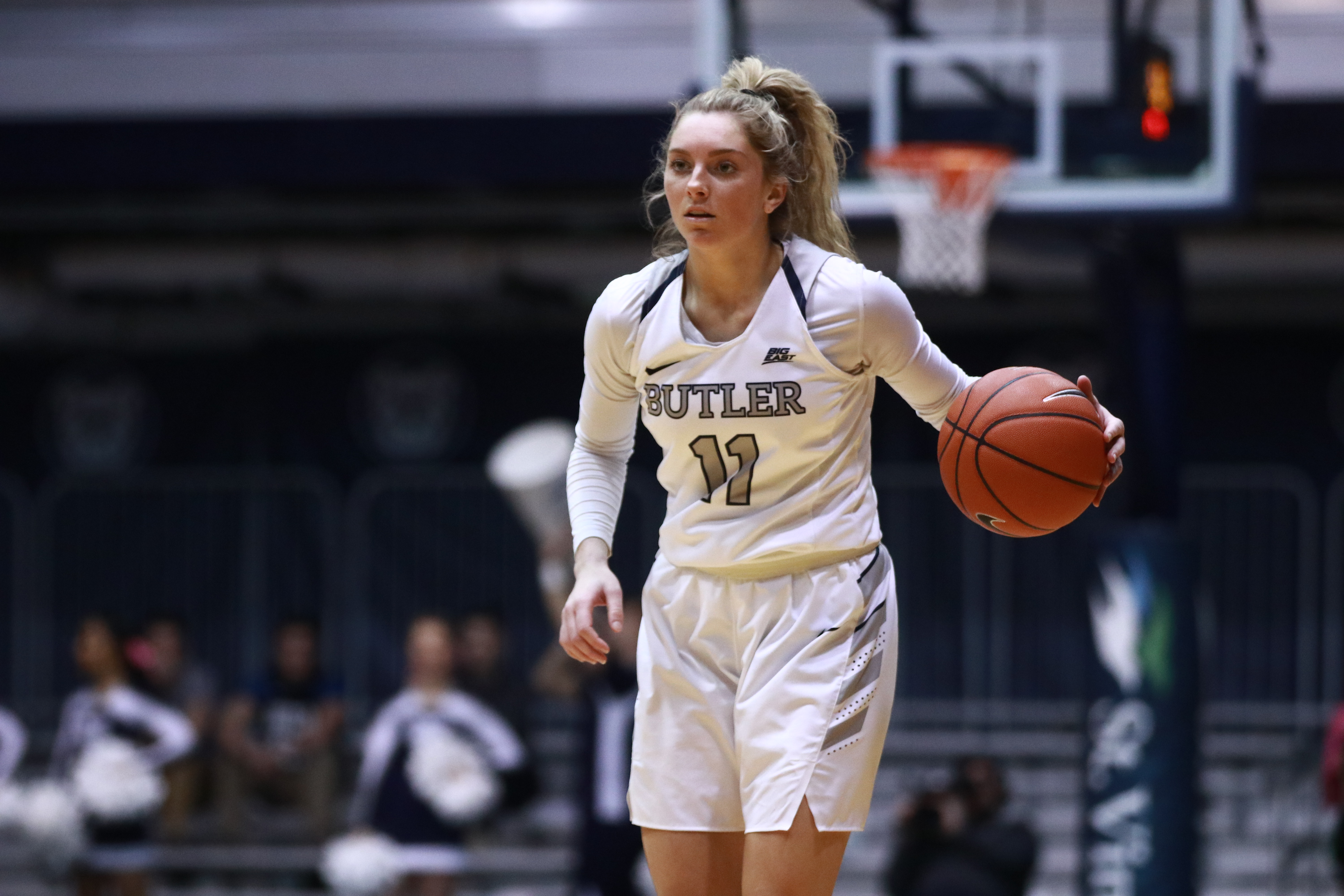 Michelle Weaver looks for an open move during a game this season. Weaver has started 98 games in her Butler career. Jimmy Lafakis/Collegian file photo.

Michelle Weaver was in elementary school when she was sitting on the bench, fuming. Her pinky finger stuck out of its socket at a 90-degree angle.

She was on defense, her hand in the passing lane, when the ball zipped in and dislodged her finger.

She didn’t even notice her pinky was sticking out at first. She realized on the next possession and scurried to the bench. Her team was losing and there was no way she was coming out, so she snapped it back into place, taped it up, and forgot about it.

Opposing players walked over to the bench and apologized to Weaver. They felt bad, but also relieved, assuming she was out for the rest of the game. Best defender injured? Best all-around player injured? Out for the game? Whew.

“Oh, no, she’s playing,” Brian Weaver, her dad and coach from 4 years old through her sophomore year in high school, remembers telling the opposing team.

Weaver, now a senior on the Butler women’s basketball team, felt she didn’t have a choice.

“Either I sit out and our team doesn’t do as well,” she said, “or I suck it up and play like it doesn’t hurt anymore and finish the game out.”

A dislocated finger didn’t stop her. It took a fractured foot to do that.

Playing in AAU Nationals in seventh grade, she leapt out of bounds in an attempt to save a loose ball. Her ankle twisted. The tendon tore a chunk of bone from the outer part of her foot, which broke on impact. She couldn’t play this time, and it drove her crazy.

Following the injury, a walking boot encased her leg. It didn’t stop her from competing. She needed to compete, in any way.

On one occasion, she hobbled down the steps of her house, waved goodbye to her mom, Joanne Weaver. As Joanne shut the door, her daughter took off for the nearby soccer fields.

“I told her, ‘What are you doing? Your foot is broken,’” Joanne said.

“I hate sitting out,” Weaver said. “I always feel weird sitting out. I feel like I’m letting my team down. Unless I really can’t play, I want to play. Unless I’m severely injured, I try to play.”

As the years have gone on, injuries have multiplied.

“She always played with some kind of pain and never really told anyone about it,” Brian said.

The Michelle Weaver that Butler fans know averages 3.48 steals a game — seventh in the country. First in assists on the team. Would rather play defense than offense.

To understand how Weaver became Weaver, rewind to her playing basketball against her two brothers, Greg and Matt, on their gravel driveway.

“Someone would always end up quitting and storming inside,” she said. “The competitive nature coming out of all of us.”

She would always say, her dad recalled, games were easy; the driveway was the hard part. The driveway prepared her for chaos and propelled her to success.

“They’d always team up and pick on me,” she said. “They would beat up on me, but playing with them made me super tough, super resilient in anything I do on and off the court.”

The Weaver family brought the mentality of their driveway everywhere. When Weaver was a child, the family periodically “vacationed” to Cocoa Beach, Florida.

“She didn’t bring a doll, she brought a basketball,” Brian said.

She would scour the condos, looking for a game. Against girls. Against boys. Didn’t matter. She wouldn’t find one.

Other kids at Cocoa Beach were there to get away from the habits of everyday life, exchanging basketballs for beach balls. Everyone was on the beach, relaxing.

“She started playing against boys when she was five years old,” Brian said. “She lived by the mantra, ‘Throw your hat over the wall and go get it. Not complain, just go play.’ It was fun; it wasn’t work for her. For other kids that age, their parents would have to push to get result the kid was looking for. But for her, she just took off.”

So, the driveway came with the family. Games pitted Weaver against her brothers. One-on-one. Knockout. H-O-R-S-E.

From seventh grade through her senior year, Weaver played for Damon Bailey’s AAU team in the offseason. Overshadowing her were Ali Patberg, who played at Notre Dame and now at Indiana, Jenna Allen at Michigan State, Dominique McBryde at Arizona, and Brittany Ward, who played at Butler before playing at Dayton.

“We coaches talk all the time about players who have what you can’t teach,” Bailey said.

“Michelle is that kind of player. She does a lot of little things that go unnoticed throughout the course of the game. Michelle does all the things that don’t show up on the stat sheet.”

As a player who won two sectional championships her freshman and junior years in high school, and guided her team to a 20-2 record her senior season, playing for such an inexperienced Butler team was a tough transition.

“It was hard for my freshman class because we had to come in and play right away,” Weaver said. “It was an eye-opener for us that this was a real thing.”

The summer before her freshman year, Weaver got acquainted with fellow senior Tori Schickel at a basketball camp. Though the two didn’t officially meet, Schickel couldn’t help but notice Weaver’s staunch defensive technique and unwavering effort.

“Defensively, I said ‘’God I hope she doesn’t guard me,”’ Schickel said. “She was everywhere all the time. I remember thinking, ‘’Wow she’s really fast and her hands were everywhere.”’

Weaver earned the starting point guard job upon arrival at Butler. Her freshman year, she started 14 of 17 games — averaging 4.6 points per game on 39 percent shooting — before going down with a lower leg injury. Her minutes fluctuated, though. She was limited to eight minutes or less in her last four appearances.

She scored more as a sophomore, producing 10.2 points in 27 starts of 29 total games.

In her junior season, she shot 46 percent from the field while scoring 8.3 points per game with a team-high 32.8 minutes per game. Both her sophomore and junior years, she placed third in the conference in steals.

In the midst of her junior season, Butler head coach Kurt Godlevske entrusted Weaver with guarding the opposing team’s best player every game.

“In her junior year, she really got herself physically in shape,” Godlevske said. “Coming into this year, we told her, ‘You’re going to defend the team’s best player, no matter how big or small she is.’”

This season, Weaver has been thrust into a role that demands a balance between offense and defense, one that came about when guard Katherine Strong — who was averaging 7.5 points — went down with a leg injury on Jan. 27. It’s a role that doesn’t come naturally to Weaver.

“I would rather play defense than offense, so when I get to guard the best player, that’s what I look forward to,” she said. “I look forward to having one of the hardest responsibilities.”

Defense is an outlet through which Weaver can display her quiet determination.

“I’m not the type of person that needs the spotlight on me,” she said. “If I don’t get any recognition, it doesn’t bother me at all. I never feel underrated. My coaches and teammates know what I do, and that’s fine. As long as our team’s winning, that’s all that matters.”

In the game against Providence on Feb. 17, Weaver scored zero points on zero shots in 31 minutes. Butler ultimately lost in overtime, 66-63.

“It wasn’t really intended, I probably should have shot more,” she said. “Whitney [Jennings] and Kristen [Spolyar] were hitting everything and they both had great games. Sometimes, I get into the habit of when they’re doing well, I just kind of step back.”

During his halftime speech, Godlevske addressed Weaver’s lack of aggression, citing the importance of her role.

“I told her she’s got the toughest job on the team,” he said. “She’s got to stop their best player, she’s got to find a way to get 8-10 points, but she hadn’t taken a shot yet and she had to put a little more pressure on them by looking to score.”

Weaver has helped the team to 20-7 overall start, with a 10-6 Big East record. After a key win over No. 11 Marquette on Feb. 22, the Bulldogs have a legitimate crack at the NCAA Tournament. The Bulldogs are projected to be in the “last four out” in the latest update of Charlie Creme of ESPN’s Bracketology.

Weaver will have something to say about that. After all, injuries don’t stop her. The toughest defensive assignment doesn’t stop her. Only the NCAA selection committee can stop her now.