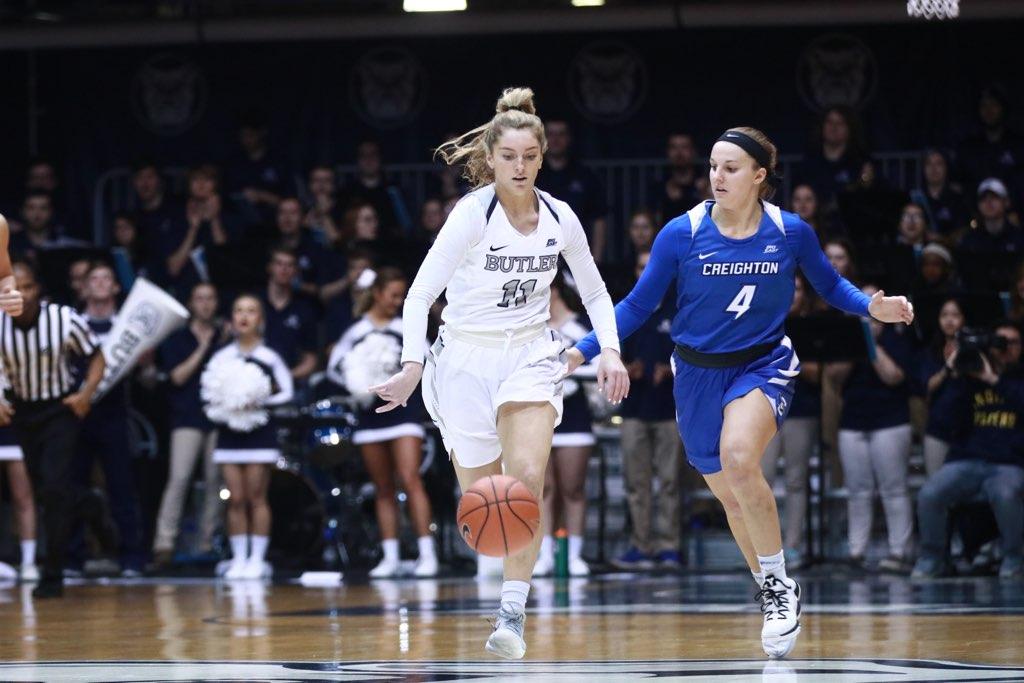 Michelle Weaver chases after a loose ball against Creighton. Weaver recorded six steals and 10 points in the win. Photo by Jimmy Lafakis.

Despite a low-scoring output, the Butler women’s basketball team defeated Creighton inside Hinkle Fieldhouse, 66-46. Defense was Butler’s calling card, with Michelle Weaver accounting for half the team’s steals, nabbing six of them. Butler’s case for the NCAA Tournament grows stronger, improving to 19-5 overall and 9-4 in Big East play.

The Bulldogs held the Bluejays below 30 percent shooting on 53 shots. Creighton misfired on a heap of threes, going only 7-of-27 from deep range. No Creighton player shot over 50 percent from the field and only two players reached the double figures.

Not to say Butler’s offense was flaming hot, though the team did manage to shoot 50 percent after starting off slow in the first quarter, in which the Bulldogs shot 7-of-17. Still, they finished the first quarter with a lead, 14-12, and never looked back, winning the proceeding three quarters by eight, four, and six, respectively.

Kristen Spolyar made all three of her free throw attempts on her way to 13 points on 5-of-11 shooting. Tori Schickel scored 11 points and grabbed seven rebounds. Whitney Jennings added 10 points. And not only did Weaver grab half of Butler’s steals, but also hit half of Butler’s threes.

Butler has a quick turnaround, facing Providence in Hinkle Fieldhouse on Sunday, Feb. 17 at 2 p.m.