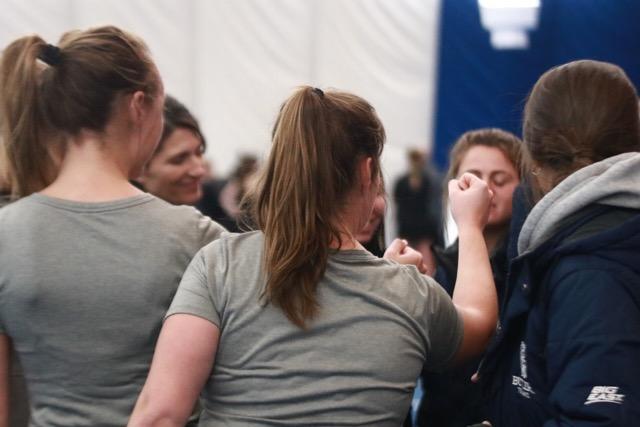 The Bulldogs had a busy weekend in the Butler Bubble, with both the men’s and women’s tennis teams playing three games against different opponents. Both teams finished 2-1 between Feb. 8 and Feb. 9. The men’s program played Dayton, Washington University, and DePauw. The women took on Indianapolis, Indiana Wesleyan, and Denison.

The men kicked off the weekend in a battle with Dayton on Friday.

The Bulldogs trailed early due to struggles in doubles matches, but things began to turn around in singles play.

Freshmen Ryan Roegner and Thomas Brennan defeated their opponents in the No. 4 and No. 5 spots in convincing fashion. Roegner defeated Joe DeMarco 6-1 and 6-4, while Brennan finished both of his sets without allowing a single point.

Senior Mason Dragos moves up to a 6-1 record on the season with a victory over Dayton’s Jordan Benjamin. Dragos won the first set 6-4 and held on to a 7-6 win in the second set.

However, singles matches by Michael Dickson, Aviv Ben Shabat, and a battle by Spencer Lang in the No. 6 spot, all ended as losses. The Bulldogs ultimately fell to the Flyers 4-3.

Dragos would continue on his streak with a 7-5 and 6-3 victory in the No. 1 slot for singles matches. From the No. 2 spot was Brennan who notched a 7-5 and 6-2 win against Bernard Neves. Strong play would continue and seal the win for the Bulldogs.

Later, Butler would travel to Greencastle, Indiana, to take on DePauw where they’d dominate the Tigers 8-1.

The Bulldogs swept doubles matches, including a 8-4 win by Dragos and Roegner. In singles, the men won five straight sets, beginning with Dragos in the No. 1 spot. With consecutive victories by Brennan and Ben Shabat, and a later win by Adrian Mag, Butler would defeat DePauw.

The men’s team moves to 6-4 on the season and are off until Feb. 18 when they play the University of Indianapolis.

The ladies started the weekend off on a sour note, falling to the University of Indianapolis on Feb. 8 1-6. While Emily Neal and Sara Linn won their doubles match 6-1 in the No. 1 spot, the Bulldogs would drop the next two sets 3-6 and 1-6, missing out on the doubles point.

In singles, Neal would fight to three sets after winning the first 7-5, but ultimately lost the deciding set 3-6. Caroline McAuley won her match in the No. 6 spot in two sets, 6-2, 6-2.

Things improved for Butler as they took on Indiana Wesleyan on Saturday and shut them out 7-0. The Dawgs swept the doubles point with 6-1, 6-4, and 7-6 victories.