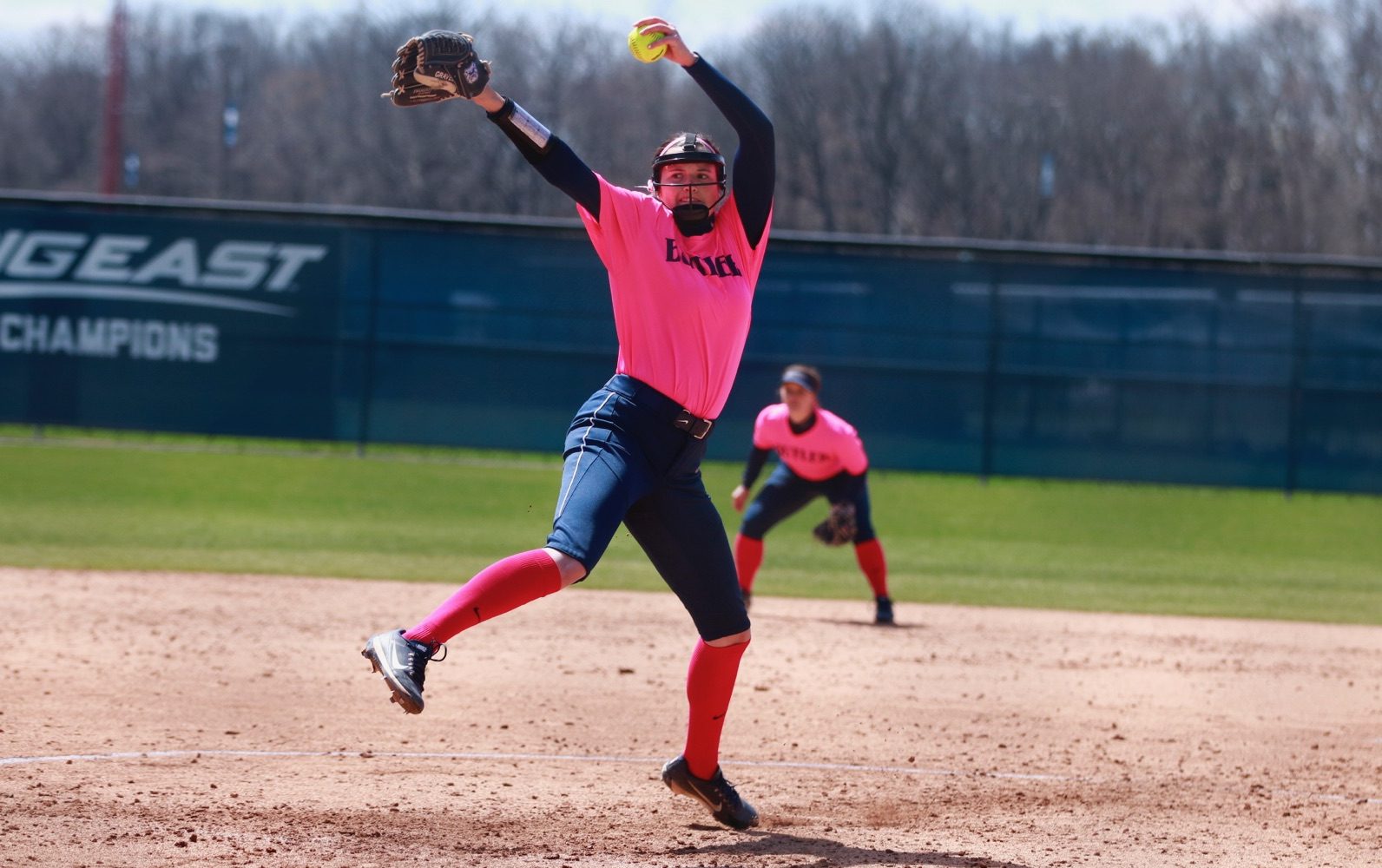 Alyssa Graves on the mound for the Bulldogs last season. Graves and the Butler softball team are 6-8 to start the season. Jimmy Lafakis/Collegian file photo.

The Butler softball team moved to 6-8 on the year as they split four games at the Hilltopper Classic at Western Kentucky University. After rain and thunderstorms rearranged the schedule, the Bulldogs played four games on Feb. 24 and 25.

In their first game against Indiana State, senior catcher Sammy Andersen had the deciding hit with a two-run home run that gave Butler a 5-4 lead. It was the first home run of the season for the Bulldogs in a 6-4 win.

The game saw the lead change hands three times. After the Sycamores plated a run in the top of the first, Butler loaded the bases in the bottom half to score three runs. In relief of starter Alyssa Graves, senior Kaitlin Doud threw 4.1 innings and allowed one earned run on four hits.

In the Bulldogs’ second game on Sunday, Western Kentucky pitcher Kennedy Sullivan had a no-hit bid through five innings and led WKU to a 3-0 win. Senior leadoff hitter Jenna Foreman broke up the no-hitter with an infield single to lead off the top of the sixth inning. Sullivan threw a complete game and struck out 16 batters for the Hilltoppers.

Although the Bulldogs were held to three hits in the matchup, Butler loaded the bases for Foreman in the top of the seventh. Freshman Kari Ricketts pitched six innings for Butler, surrendering all three runs on eight hits.

Butler closed out the Hilltopper Classic with a games against Cleveland State and Indiana State, winning the first 9-6 and dropping the second 5-0.

The Bulldogs jumped on the Vikings for nine runs in the first two innings. Junior Madi Christiansen hit the Bulldogs second home run of the year on a three-run shot to right field. Eight different players accounted for 12 Butler hits, including two apiece from Karli Ricketts, Elyse Babb, Claire Gilliland and Christiansen respectively.

The Vikings responded with a two-run homer from Kelly Hysong in the fourth inning to slim the Butler lead to 9-2. Four runs across the final two innings and loading the bases in the bottom of the seventh were not enough for the Vikings to rally.

Against Indiana State, Butler ran into another hot pitcher, this time in former Bulldog Gabbi Schnaiter. Schnaiter held the Bulldogs to four hits in a complete game shutout of her former team. Christina Candotti had two of Butler’s hits.

The Sycamores knocked around Graves for four earned runs in the first inning. Karli Ricketts pitched 5.2 innings in relief for the Bulldogs without allowing an earned run.

Butler will have the next week off before traveling to Indiana on March 5 for their next game. The Bulldogs will play in the Saluki Invitational at Southern Illinois University following the trip to Bloomington.