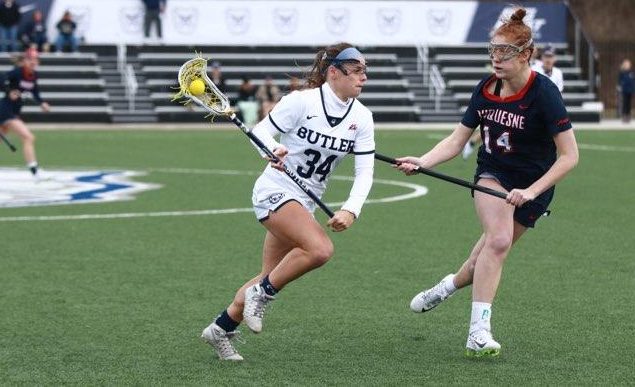 Ashley Lizzi runs at the Duquesne defense in the loss. The Bulldogs are now 0-1 on the season. Photo by Jimmy Lafakis.

The Butler lacrosse team’s first game of the year ended in a loss on Feb. 14, as Duquesne beat the Bulldogs 16-8 in front of a home Varsity Field crowd.

The Dukes put up three goals on the board before Butler answered back.

After going down 5-1, Butler scored three unanswered goals to get within one. Goals by sophomore attacker Karina Latsko, junior attacker Rachel Kegler and freshman midfielder Hannah Justice contributed to the comeback.

The teams traded pairs of goals twice, bringing the score to 7-6. Butler’s two were scored by Latsko and sophomore attacker Ashley Guerra.

Things went south from there for the Bulldogs. Duquesne scored four unanswered, and Butler was never able to recover.

The loss puts Butler at 0-1 with a road matchup against Detroit Mercy coming up on Feb. 19.