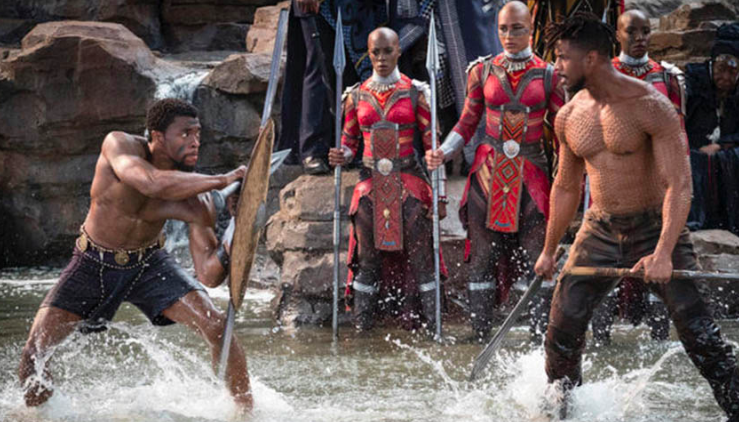 A scene from the movie Black Panther. Photo courtesy of The Charleston Chronicle

Ten years after “The Dark Knight” introduced the idea of a superhero movie being considered for the most prestigious award, director Ryan Coogler’s blockbuster masterpiece “Black Panther” is up for best picture.

The film is contending with seven other movies at next week’s Oscars in a year that does not have a clear frontrunner to take the golden statuette home. The nomination comes after a decade of debate concerning whether or not a superhero movie can be substantially rich enough for consideration from the academy.

In 2008, Heath Ledger posthumously won the academy award for Best Supporting Actor for his immortalized portrayal of the Joker in “The Dark Knight,” which many people believed deserved a Best Picture nomination.

Last year, Scott Frank, Michael Green and James Mangold earned a Best Adapted Screenplay nomination for the story they told in “Logan.” Before the world was introduced to Wakanda last February, these were the only instances where superhero movies received nominations outside of the technical categories.

Its predominantly black cast received praise for their convincing and emotionally heavy performances, as well as for its commentary on social and geopolitical issues. Its success also affirmed that the black perspective can be an impactful box office presence. It is still unlikely that the movie actually wins the big one this Sunday, but there is certainly a case for it to beat out the likes of “Roma” or “Green Book”.

Four years ago, the academy gave the award to “Birdman”. The film commented on the lack of theatrical authenticity and the absence of thematic substance in big budget, special effects blockbuster movies. “Black Panther” is the opposite of what this movie preached; it hardly relies on its special effects and action sequences and instead gets carried by the performances from Michael B. Jordan, Lupita Nyong’o, Letitia Wright, Danai Gurira and Chadwick Boseman.

The film is also backed by academy award-winning actors in Nyong’o and Forrest Whitaker, as well as nominated actors in Boseman, Daniel Kaluuya and Angela Bassett. It is not uncommon for the academy to give the award to films that include multiple Oscar winning or nominated actors, so “Black Panther” is another great example of this criteria.

It is also one of the most thematically resonant superhero movies that comments on family, loyalty, international relations and the oppression of African-Americans. All of this is done while also serving as a celebration of afrofuturism and diversity in filmmaking. Said diversity is reflected when you look at who helped bring Wakanda to life alongside Coogler.

This is only Coogler’s third movie, but, much like in Fruitvale Station and Creed, he leaves little room for people to question his ability to convey messages and ideas through his direction.

Coogler and the cast are not the only people deserving of praise for this film. Rachel Morrison was responsible for the cinematography, which is a male-dominated portion of blockbuster filmmaking. Another technical achievement worth noting is the costume design from Ruth E. Carter, who would be the first African-American to win the Oscar for best costume design.

The film is also unique from the rest of universe it shares with the other Marvel studio properties given how much they can do with the brand. By the end of next decade, it will surely be a staple of pop culture among the likes of “Star Wars” or “Avatar” after its inevitable sequels, theme park attraction and broadway show get realized.

What would make “Black Panther” unique from these best picture-nominated cultural landmarks would be a win. It would be a generational milestone that not only the Academy should recognize, but the rest of the world deserves to as well.