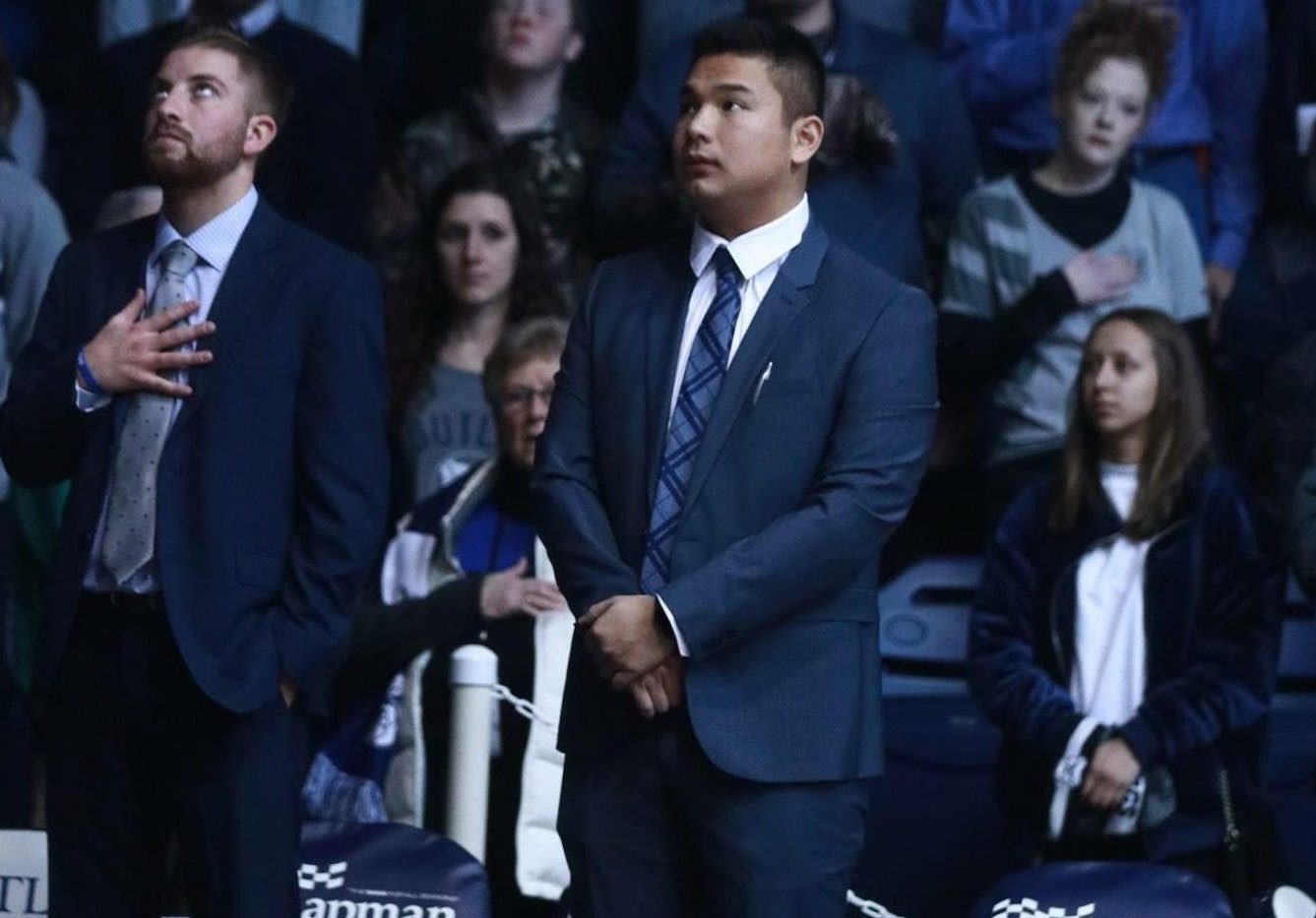 The first time someone approached senior Sam Sturtevant about being a basketball manager, he was less than enthused about the idea.

“When you think about manager, you think about passing out water, wiping up sweat, carrying gear bags,” he said. “I was still only a 15-year-old kid. I was like, ‘What would my friends think?’”

After thinking it over for a couple weeks and talking with his parents, Sturtevant decided becoming a manager was the best path to the career in sports he knew he desired, even though he wasn’t exactly sure what he wanted it to look like.

When he did agree to take the job, Sturtevant asked if he could be called a “student assistant” instead of a “manager.”

Flash forward, and he is in his seventh year as a manager, first for three years at the high school level and now all four years at Butler. As a senior, he is one of two head managers for the team.

But before starting his managerial career, Sturtevant, originally from Plymouth, Indiana, played soccer and basketball as a freshman at La Lumiere High School.

Before Sturtevant’s sophomore year, head boys’ basketball coach Alan Huss asked him about the possibility of transitioning to a manager role. The previous manager was graduating, and the team needed someone to replace him.

Sturtevant, who described himself as “the hype guy” sitting at the end of the bench during his playing career at La Lumiere, loved his role on the team but agreed to take on the new role.

For the next three years, he traveled across the country — from Las Vegas to Florida — with a team that ended the 2014-15 season as MaxPreps’ top team in Indiana and won the 2017 Dick’s Sporting Goods National Championship.

Before Sturtevant arrived at Butler, Shane Heirman, who replaced Huss as La Lumiere’s head coach, contacted then Butler assistant coach Ryan Pedon on Sturtevant’s behalf. Sturtevant called Pedon his first week on campus and was hired as a manager soon after.

Sturtevant vowed to make the most of the opportunity but described the transition to the collegiate level as “intimidating.”

“In high school, I always tell people, I was more of a manager — laundry, packing backs,” he said. “Here, you’re a manager plus a million other things.”

Those million things include everything from setting up before practice to writing down what happens during timeouts.

Butler has won a game in the NCAA Tournament in each of Sturtevant’s three seasons as a manager, reaching the Sweet 16 in 2016-17. He credits the program’s atmosphere for creating a culture where managers feel valued by the coaches and players.

Now, Sturtevant serves alongside fellow senior Adam Owens as a head manager. Owens focuses on scouting and film while Sturtevant is in charge of logistics.

He works with Brandon Crone, coordinator of basketball operations, to plan the team’s itinerary and create individual lifting schedules for players based on when they have class.

“If you had told me he’s doing the stuff he is now his freshman year, I probably wouldn’t have believed you,” Owens said. “But that’s just a testament to him working hard and him just kind of every day changing who he was.”

Sturtevant’s interest in the operations aspect of basketball was shaped in large part by his internship last summer. He served as the director of basketball operations for the Indy Bandits, a semi-pro women’s professional team.

“It was definitely a crazy experience,” Sturtevant said. “Just working with a team that doesn’t have the financial stability of Butler and things like that. It taught me a lot about myself and how I can do things better.”

During games, Sturtevant writes down everything head coach LaVall Jordan says throughout timeouts and provides that information to the coaching staff after the game. Either he or Owens is on every road trip with the team.

Before the team’s practices, Sturtevant helps set up for drills. While the practices are going on, he ensures they run smoothly and participates in some of the drills.

Another one of Sturtevant’s focuses is helping prepare younger managers like Noah Weiss for leadership roles in the future.

“[Sturtevant] cares a lot about the entire team, the entire operation,” Weiss said. “Every day, he comes in with a high level of energy. I feel like that’s what I’ve learned most from [Sturtevant], is that you have to be excited to be a manager.”

In Owens’ mind, Sturtevant has accomplished his mission.

“He’s such a glue guy to the managers,” Owens said. “Every manager looks up to him in a sense. I really appreciate what he does. I know the younger guys look up to him.”

Once he graduates in this spring, Sturtevant wants to turn his experience as a manager into a career. His goal is to get into the NBA ranks whichever way he can. From his perspective, basketball is Plan A. Plan B does not exist.

Further down the road, Sturtevant is interested in coaching a high school team. He is intrigued by the possibility of serving as a mentor for kids and being a positive influence in their development off the court.

Sturtevant coached seventh and eighth grade AAU teams in the Indiana Youth Basketball League during the summers leading into his sophomore and junior years at Butler. For now, though, the focus is on getting Butler back to the NCAA Tournament.

Seven years into the job, Sturtevant’s perspective on being a manager is slightly different.

“We play a really important role,” he said. “Honestly, I am so proud to say that I’m a manager.”