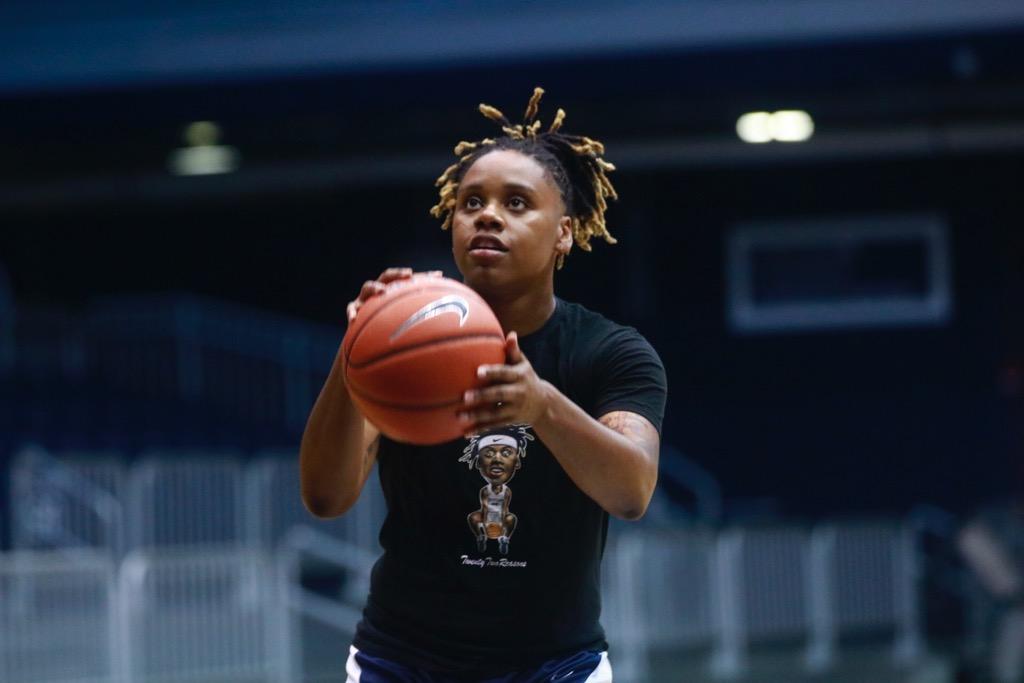 Katherine Strong in a “22 Reasons” shirt. Strong started the brand while she was at VCU. Jimmy Lafakis/Collegian file photo.

If you blink, you might miss the yellow Post-it note. It’s easy to walk right past it, but Butler University women’s basketball head coach Kurt Godlevske appreciates the message. He enjoys his personal note from Katherine Strong so much, he stuck it to his office door.

Only five words are written.

“You’re awesome. I appreciate you.”

Strong, a redshirt junior guard from Chicago Heights, Illinois, has helped guide the Bulldogs (16-4, 6-3 Big East) to their best season in over 20 years. The last time Butler reached the NCAA Tournament was 1996. The year Strong was born.

She played her first two seasons at Virginia Commonwealth University, then sat out the 2017-18 season at Butler due to NCAA transfer rules.

“Redshirting was the hard part of everything,” Strong said. “I was around people who were very positive and very motivational. It was always competitive. But when it came to games, it was like, ‘Alright, I’m their cheerleader.’”

The positivity and motivation rubbed off on Strong. Now that she’s playing, she reciprocates those vibes to her teammates.

On Jan. 27, Strong suffered a leg injury while going up for a shot against Marquette. She was taken off the court in an air cast. Her status for the rest of the season is unknown.

Her attitude made a lasting impression on Godlevske.

“You never see her bragging about herself,” he said. “She’s a very humble individual. She goes about success the right way, and that’s through earning it.”

Butler is her second university, but she has found a new home with her teammates in Hinkle Fieldhouse.

“This is my second family,” Strong said. “I treat them all like my sisters.”

On Jan. 6, that family took another step in their growth. The Bulldogs defeated St. John’s University 66-45, weathering the Red Storm in Hinkle. Strong contributed 13 points and five rebounds, but looks back on that game as the time where the team truly came together.

“Everybody was a Butler Bulldog,” Strong said. “Michelle [Weaver] got a layup and got fouled. And I’m screaming ‘And-one!’ in the camera. Everybody felt the energy, and I feel like that’s the meaning of being a Bulldog. Being a family and just bringing energy.”

Strong may have built bonds in Indianapolis, but receives a lot of love from the Chicagoland area. She will frequently post game times and channels on Facebook. Her comment section will flood, as her support system lets her know they’re tuned in and rooting for her.

“They just want to see people get out of Chicago,” she said. “They support whoever is positive and just brings a positive light. Family, friends, my high school teachers, principals, police. Pretty much anybody.”

Off the court, Strong has a burning desire to channel her creativity. She quenches that thirst through two main platforms: photography and her clothing line, “Twenty-Two Reasons.”

She started taking pictures when she tore her ACL during her junior year of high school.

When she’s behind the lens, Strong always makes sure she takes care of her teammates.

“She’s always ready to take pics, no matter what we’re doing,” Weaver said. “Even when we were at our team photo shoot, she had her own camera and was out here taking pictures. Just trying to capture others’ moments.”

“Twenty-Two Reasons” started after she received positive feedback from friends at VCU. After deciding to make her own line during her sophomore year, a friend made a logo with her number and initials.

More friends encouraged her, citing Strong’s creative spirit. A cousin with his own clothing line guided her and told her who she should reach out to.

The line has an Instagram page and has expanded to shirts and jackets. Strong said she stopped working on it to focus on basketball and school. She plans to resume work this summer.

She wears number 22 on the court, but her true “reasons” behind her line’s name are more nuanced.

“Reasons because I do everything for a reason,” Strong said. “There’s a reason behind everything you do.”

The clothing line is both a way to express herself and help others express themselves. Strong described herself as always “different.”

Godlevske knows about her line, and said he might even consider wearing it.

“Anything to support my girls,” he said. “It would probably make me look good.”

Her creativity’s roots can be traced back to her younger days. She even became something of a trend-setter in high school.

“I always draw on my shirts or draw on my jackets,” Strong said. “I couldn’t really draw, so I would stick to stick figures or flowers because flowers were the thing back in high school. People were like, ‘Why are you doing that?’ And now, everybody does it.”

Strong has fun: taking pictures with her camera, sketching new clothing designs or raising imaginary pom-poms. When she laces up her sneakers and steps on the court, her focus shifts to one goal: winning the game.

“It’s all about staying together and going after what we know we can get,” Strong said. “A championship. A dance to the NCAA.”